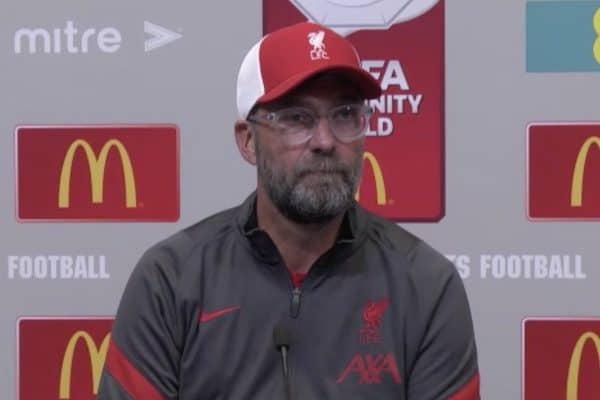 Jurgen Klopp was quick to stress that Liverpool now “have another two weeks to prepare” for the new season after a narrow loss to Arsenal in the Community Shield.

The Reds were pegged back by an early Pierre-Emerick Aubameyang goal in Saturday’s clash at Wembley, with the Gunners dropping deep and looking to hold on for victory.

Liverpool, significantly fresher after two weeks of pre-season, were forced to fight, and it took the introduction of Naby Keita and goalscorer Takumi Minamino to turn the tide and set up a penalty shootout.

Unfortunately, another substitute, Rhian Brewster, blasted his spot-kick against the bar with his only touch of the game and, with Arsenal more clinical, the Reds lost 5-4 on penalties.

Losing the Community Shield is far from disastrous, and in fact Klopp’s side suffered same result in last season’s tie, but it did highlight how Liverpool need more answers in front of a low block.

“With parts of the game I was obviously pleased,” Klopp told reporters after the game.

“The game we had to play here today against a deep defensive block, 5-4-1, you need to have 100 percent fresh legs, your decision-making needs to be on top.

“We were not the freshest legs, but they were fresher than three or four days ago.

“It’s all normal. We have another two weeks to prepare for the next season.”

As Klopp notes, Liverpool are next in action on September 12, with the visit of Leeds kicking off a Premier League campaign that they hope will end with another title.

One of the key positives to take from Saturday’s defeat was the impact of Minamino, and the manager was delighted his January signing was able to score his first goal for the club, saying it was “the only thing he lacked.”

“It was big for him and big for us because it was the only thing he lacked since he is with us,” he continued.

“He didn’t score a goal [before], but had situations and was close in plenty of moments. That helped of course.

“The shape he is in is obviously good, I think everybody could see when he came on.

“Then, the goal is more or less the logical step after performing on the level he performs now, especially in the pre-season.

“I am very pleased for him; it was very important for us to stay in the game and for him, just to make this first important step.”

Klopp also gave his backing to the five substitute rule for the new campaign, and reassured Brewster after his disappointing cameo, saying “this will not harm him because we will not let it happen.”