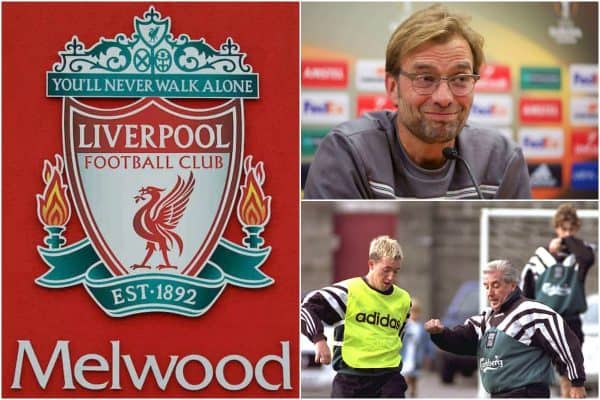 “I set off the fire alarm on my first visit!” – Hilarious Melwood memories & pinch-me moments

With Melwood having been an integral part of Liverpool Football Club for 70 years, it holds an abundance of memories for those who had the pleasure of walking its halls.

The Reds officially parted ways with Melwood over the international break, bidding farewell to the training ground which bore witness to 43 major honours and 14 managers.

A new chapter awaits at Kirkby where Jurgen Klopp and Co. are eager to “create the future,” leaving a bittersweet feeling as the club turns a new page.

Melwood was the home away from home for Reds past and present and was also a space which provided lasting memories for commentator Keith Costigan, Liverpool reporter David Lynch and This Is Anfield’s Matt Ladson.

The trio shared their hilarious tales and pinch-me moments in a special edition of This Is Anfield Weekly, with Keith’s first-ever visit leading to an unfortunate sounding of the fire alarm.

“The first time I went to Melwood was before the Carling Cup final in 2012, John Henry had set up to go over and do some interviews so I got to interview Pepe Reina and Glenn Johnson,” Keith explained.

“I set it off and I walk out and literally the first person that is there is Carra, and he said ‘don’t look at me I didn’t do it’ and I was going, are you kidding me my first time at Melwood – I’m in 10 minutes!

“The alarm was loud, I mean really loud. I remember Damien Comolli, I believe, was there, looking around to see what was going on and I’m going, ‘please get me through this’.

“And finally the alarm is taken off!”

He never got the sit-down interview with Kenny, but he did get a tour of Melwood from the great man – talk about pinch-me moments.

For David, former club journalist, one early memory of Jurgen Klopp stands out above the rest, when a normal interaction for the boss left a lasting impression on those around him.

“The one thing that sticks out is probably Klopp in his early years,” David recalls.

“I remember we were we sat in a room upstairs where we used to work and he was coming in at that time to have a smoke outside because he didn’t have a balcony from the manager’s office.

“So he came down the hall into the office and he’s sat there having a cigarette with the door open and he turns to us and starts asking us about the Merseyside derby and what the atmosphere is like, what’s the game like, comparing it to Dortmund vs. Schalke.

“And you’re just sat there chatting with the manager of Liverpool Football Club, one of the few men to have ever held that role, and he’s just having a cigarette and talking to you about football – one of those moments you always remember, just incredible.”

And Matt looked back to a different time when fans were able to access Melwood back in the ’90s during pre-season – can you imagine if that was possible with Klopp’s side!

“My first memory was when you could actually go – and this is back in the ’90s, and Roy Evans was manager – and you could just turn up,” Matt said.

“It was only a certain couple of weeks in pre-season and for a certain time and you just turned up. You went into the old entrance, which was before Melwood got redesigned, and you stood and watched training.

“The players would then come along and sign anything and everything – very different to now where some supporters can go but it’s all done through partners and sponsorships.”

Melwood will forever hold a special place in Liverpool’s history books, an iconic setting which provided the foundations for the success experienced over the last 70 years.

Here’s hoping Kirkby can create a similar legacy, starting with Klopp’s side as they look to retain their league title in 2020/21.