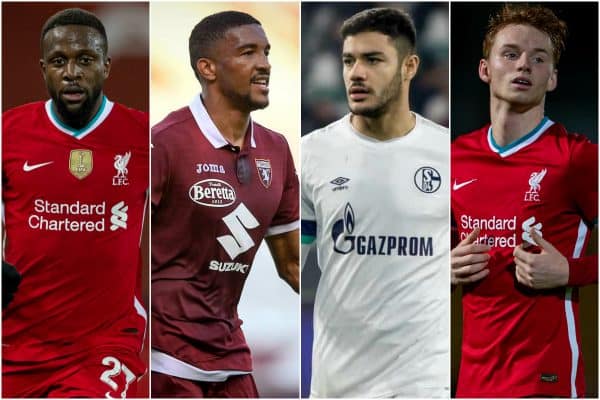 What to expect from Liverpool FC in the January transfer window

The January transfer window is now open and Liverpool could well do business in the month ahead – so what can we expect in terms of ins, outs and loans at Anfield?

As of January 2, clubs across England are able to sign, sell and loan players again, with registration open in the Premier League until the deadline at 11pm on February 1.

While winter is not usually a period that Jurgen Klopp and Michael Edwards aim to do major business in, the strange and demanding circumstances of the current campaign could see a change in approach.

Meanwhile, there could be at least one first-team player to depart, and there are likely to be more loan deals agreed for the Reds’ young talents in need of senior exposure.

Here’s what to expect from Liverpool in the January transfer window.

The obvious area that requires attention this month is at centre-back, with Liverpool desperately short of options throughout the first half of the campaign.

With Virgil van Dijk and Joe Gomez likely to miss the rest of the season, and Joel Matip barely able to start consecutive games without picking up injury, the onus has been on Fabinho to lead the defence.

Rhys Williams and Nat Phillips have proven capable deputies, but a stand-in midfielder and two inexperienced partners is not the setup expected of Premier League champions.

While all outlets are suggesting it will be a quiet window for the Reds with no incomings planned, under the surface it is likely that Edwards and his recruitment are working fervently.

Lille’s Sven Botman (20), Schalke’s Ozan Kabak (20) and Torino’s Gleison Bremer (23) are among the centre-backs linked, and all would fit the profile of a young option who could step in and perform while not demanding a first-choice role when Van Dijk is fit.

RB Leipzig duo Dayot Upamecano (22) and Ibrahima Konate (21) have also been touted as targets, but the Champions League last 16 draw, pitting the two clubs against each other, likely rules the pair out as mid-season arrivals.

There could even be a surprise candidate to emerge, with Liverpool proving their ability to identify hidden gems in the past.

In terms of outgoings, the most high-profile player with question marks over his future is Divock Origi, with the Belgian having played just seven minutes in the Premier League so far this season and only starting four times in all competitions.

The Athletic report that Liverpool would entertain offers for their No. 27, and while they “aren’t actively looking to sell,” a price tag of £20 million is suggested.

Wolves were credited with an interest but that is believed to have cooled, while Inter Milan, Atletico Madrid, Royal Antwerp, Club Brugge and Schalke are among the clubs also linked.

Schalke are the most interesting option, with Sky Germany claiming that Origi could be used as part of a swap deal that would see Kabak head the other way.

Toronto confirmed at the end of November that Gallacher’s deal would run out, removing the Scot from their roster for the 2021 campaign, which left him to return to Merseyside.

Both he and fellow full-back Yasser Larouci could leave Liverpool on a permanent basis this month, though it remains to be seen if any concrete interest develops in the coming weeks.

After Gallacher’s deal expired, Liverpool currently have 11 players out on loan, with only six of those starting regularly.

Loan pathways manager Julian Ward has recently been promoted to assistant sporting director, which has seen David Woodfine take his place in the new role of director of loan management.

Woodfine’s biggest priority in the winter window will be finding temporary clubs for Sepp van den Berg and Liam Millar, with the under-23s pair expected to head out in pursuit of first-team football.

There may also be the prospect of Leighton Clarkson leaving on loan if Liverpool exit the FA Cup at the third-round stage, with Aston Villa the opponents on January 8.

Clarkson started in the Champions League draw with Midtjylland in December, and along with Jake Cain has trained with the senior squad on a full-time basis this season, so finding the right club for his development would be imperative.

Vitezslav Jaros and Liam Coyle could feasibly move on loan too – the latter, now 21, has been training with the U23s this season but as of yet has not featured.

Beyond the outgoings, there is also the possibility that Loris Karius returns to Merseyside prematurely, with it mooted in Germany that Union Berlin may terminate his deal.

If so, Karius would likely head out again, but having only played once for Union this season – a 3-2 loss to Paderborn in the DFB-Pokal – his list of suitors may be shorter this time around.

Finally, it was speculated that Liverpool could recall Harvey Elliott from his impressive loan spell with Blackburn, on the back of his excellent form and the injury to Diogo Jota, but that is highly unlikely at this stage.