Liverpool can expect to welcome a full capacity of 53,394 supporters back to Anfield in time for pre-season, with COVID-19 case numbers giving hope after a recent trial.

In line with the UK government’s roadmap out of lockdown, mass gatherings will be permitted from June 21, provided there are no major spikes in cases between now and then.

So far, the plans are running smoothly, and next month should see indoor hospitality reopen and groups of six allowed to meet again in homes, as guidelines are reviewed.

The biggest step is set for June 21, when all restrictions are expected to be lifted, though there has remained uncertainty over whether social distancing would be required at mass gatherings such as football games.

That would almost certainly require a cap of attendance, but according to the Telegraph, the prime minister Boris Johnson is set to be informed that this will not be the case.

Pilot schemes have taken place in the FA Cup semi-finals, the League Cup final and, perhaps most significantly, the World Snooker Championship, with crowds allowed to attend in smaller numbers.

The World Snooker Championship is, naturally, held indoors, and the finals on May 2 and 3 are set to go ahead without restrictions on attendance, with around 980 seats to be filled without social distancing.

If these continue to produce encouraging results, large-scale football games should be allowed to be played in front of full-capacity crowds. 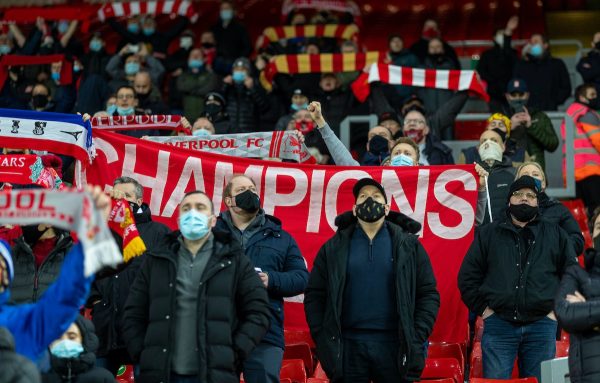 There will still be safety measures in place, such as staggered entry and, more than likely, COVID-19 passports, but by and large, normality should return in time for pre-season.

Liverpool are in discussions to play two warmup friendlies with Man United as part of their summer preparations, one of which will be held at Anfield at the start of August.

That will be the biggest game Liverpool have played in front of a full crowd since the Champions League last 16 defeat to Atletico Madrid over a year ago.

It is likely that at least one more Anfield friendly will be organised, possibly against a foreign club, while Jurgen Klopp is expected to take his squad for training camps in Evian and Saalfelden.