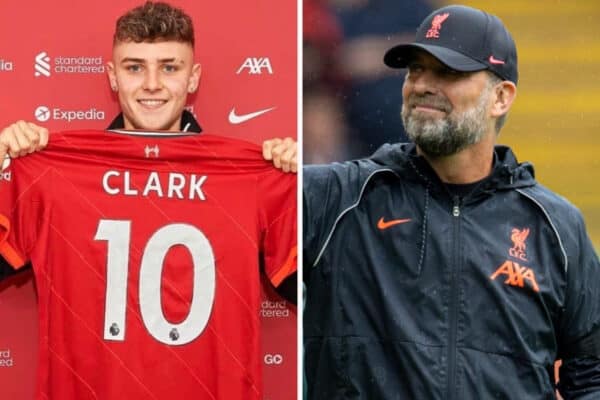 Newcastle manager Steve Bruce has been left “disappointed” following Bobby Clark‘s move to Liverpool, after Jurgen Klopp rolled out the red carpet for the 16-year-old.

Clark was confirmed to have joined the Reds on Thursday, with the young forward arriving as a first-year scholar after turning down an offer from Newcastle.

The teenager was on the books at St James’ Park for seven years, with his father Lee Clark having come through the youth ranks at the northeast club to go on and make 159 appearances for the first team over two stints.

But the lure of Anfield proved too much, with Liverpool working hard to convince the England under-16s international to make the move to Merseyside.

Klopp held talks with Clark in person, explaining to him his plans for an eventual first-team breakthrough, while he and his family were given a guided tour of the stadium and the player met with his new under-18s team-mates.

This red-carpet treatment clearly worked for a young talent considered one of the most promising of his generation, but it left Bruce ruing a “flawed” system whereby potential scholars are able to leave for nominal compensation fees.

“First and foremost, it’s what the boy and his family wanted. We’re disappointed that we lost him, because nobody wants to lose a good player,” the Magpies boss said.

“I do believe in that situation that the system, for me, is flawed. We benefited from the kid we signed from Carlisle, Joe White.

“Yeah, disappointed, of course we are. I think it’s flawed. He’s been here since he was a boy.

“I think, in the end, it was best for all parties to part company.”

Bruce’s comments suggest there is a bitterness at Newcastle over the manner in which Clark left, but it is a situation that plays out at every club with their youngsters.

Liverpool, for example, saw striker Ethan Ennis turn down a scholarship offer in order to join Man United earlier in the summer, after netting a 15-minute hat-trick for the Reds’ U18s in the FA Youth Cup last season.

That Bruce pointed out how Newcastle had “benefited” from the same system in signing Joe White from Carlisle is further proof of this.

The fact Klopp met with Clark prior to his switch suggests that there are high hopes for him at Liverpool, perhaps in a similar vein to Kaide Gordon, who has progressed swiftly through the ranks after his signing in February.

Clark will begin life at Kirkby with Marc Bridge-Wilkinson’s U18s, and could make his debut as early as next month with the trip to Nottingham Forest.