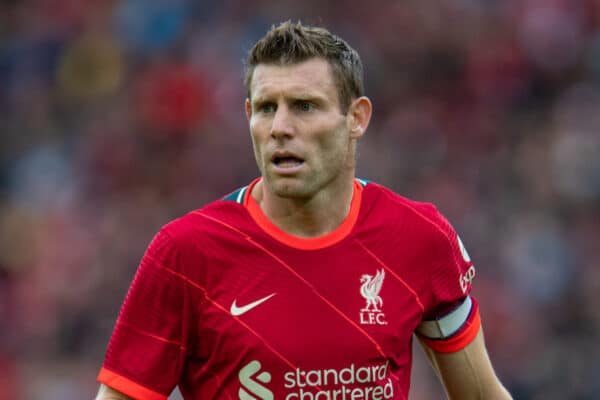 James Milner was back in the mix at training as Jurgen Klopp prepares his team for the resumption of the Premier League, which starts with a trip to Leeds.

The Reds have slowly seen their squad reassemble following the international break, and 25 players were in the mix at training on Thursday.

Milner was a notable sight after missing both the games against Burnley and Chelsea due to a muscle injury, one that enforced his absence in team training up until now.

The 35-year-old was a starter at Norwich on the opening day but will be expected to return as a squad option at his former stomping ground at Elland Road this weekend, if at all.

Also involved in training was Harvey Elliott following his early withdrawal from England under-21 duty, but the precautionary move will keep him in contention for his third start of the season.

Naby Keita and Virgil van Dijk were similarly in high spirits after international scares of their own, with the No. 4 certainly causing worry for Klopp.

There was also a youthful presence with academy trio Elijah Dixon-Bonner, Luke Chambers and Tyler Morton all put through their paces as 16-year-old Kaide Gordon continues to be in and amongst the first-team.

There was, of course, no sight of Roberto Firmino, Neco Williams and Takumi Minamino due to injury, while Loris Karius and Nat Phillips were not pictured at a rain-sodden Kirkby.

Jordan Henderson and Trent Alexander-Arnold, meanwhile, will be expected to return on Friday after their exploits with England.

But as of Friday morning, there has been no confirmation as to whether or not Alisson or Fabinho can play against Leeds as the Brazil fallout continues, but both took full part in training.