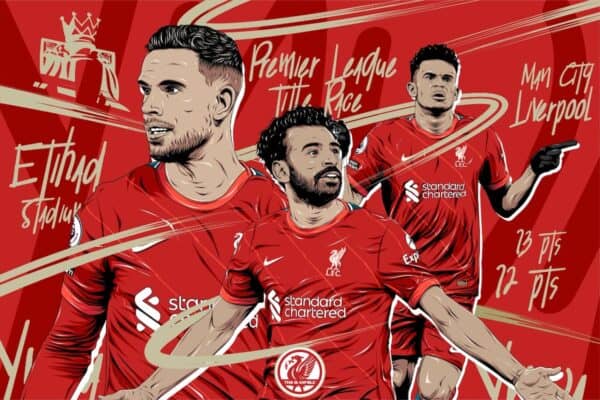 10 key things to know ahead of Man City vs. Liverpool

It’s finally here, the chance to move clear at the top of the Premier League table awaits Liverpool at the Etihad – a ground the Reds last won at in 2018.

You wouldn’t be alone if the nerves are already kicking in as the anticipation builds for a fixture that has long been in the mind of those at Liverpool and City.

Jurgen Klopp‘s men are currently on a 10-game winning streak in the league while in that same time, Pep Guardiola’s side have dropped seven points to see the Reds claw back what was a 14-point gap.

A huge 90 minutes awaits and here’s all you need to know!

Earlier this week, Guardiola claimed the 14-point gap Liverpool have since dwindled to one was “fake” as he stressed that the Reds had two games in hand, not that you can guarantee the results.

But in any case, what was once a 14-point gap in mid-January is now just one, with Liverpool having picked up 30 from their last 10 games and City 23.

A defeat at Tottenham and draws with Southampton and Crystal Palace have tightened the title race and leaves the door ajar for Liverpool to take control on Sunday, should they win.

At the Etihad this season, City have dropped eight points from 14 games – with Southampton, Spurs and Palace the only sides to leave with something to date.

The hosts also boast a relatively clean bill of health throughout their squad, but notably are set to still be without centre-back Ruben Dias.

Dias has been sidelined since March with a hamstring injury and Guardiola confirmed “everyone is fit, not Dias” when he fronted the press on Friday.

The City boss has been known from time to time to rule a player out only for them to make an appearance but it seems unlikely in this case with the stakes too high to rush him back.

It means that John Stones and Aymeric Laporte are to continue their partnership at the back.

It is indeed true, Liverpool returned from Benfica with no concerns and as such, will travel to the Etihad with a full squad available.

It creates another welcome headache for Klopp as he looks to find the winning formula against the current leaders.

Sadio Mane, Mohamed Salah and Thiago were all taken off at the hour mark in Portugal which could hint at their involvement, while Trent Alexander-Arnold came through unscathed on his return.

4. How could the Reds line up?

Quite a few names pick themselves for Liverpool, mainly in the backline and as such, it is the midfield and forward line that eyes will be trained on when team news is released before kickoff.

One of the questions will be if Jordan Henderson comes back into the XI after playing the final 30 minutes in Lisbon, you’d expect the answer to be yes despite Naby Keita‘s classy performance.

You then have five high calibre options up front to dwindle to three with Mane, Salah, Luis Diaz, Diogo Jota and Roberto Firmino all vying for a spot.

While Diaz is a popular choice to start, the feeling is the front three of old in Salah, Mane and Firmino could yet get the nod.

We’ve not witnessed the electric and near untouchable Salah in recent weeks, fatigue noticeably taking its toll having played more than 4,500 minutes for club and country already this season.

Klopp acknowledged the intensity of the situation but he is a big-game player and Sunday is as big as it gets.

In 12 previous games against City, Salah has scored seven goals and laid on a further three and you can’t bet against him coming to life at the perfect time.

Another beauty like the one at Anfield will not go amiss!

Klopp and Guardiola are no strangers having faced off 22 times across Germany and England, with the current City-Liverpool tussle one that has become a key feature of English football.

And when the City boss was asked if the rivalry could be sustained like that of tennis greats, he said:

“I would say Rafa and Nadal was two decades, to sustain for a long time is more difficult.

“But in this period, I will remember my period here, when I’m watching and playing golf, I’ll remember my biggest rivals as Liverpool.

“Absolutely we wouldn’t be as good but for them, after 100 points, 98 you need someone to push them.”

You then have to look back a considerable distance to find who sits in third in this specific table, and it’s Chelsea with only 264 points.

It goes to show the sheer level of dominance and the level of perfection needed to win the title when the margin for error is so very small.

Currently, there is only one point that separates the two teams but come Sunday night, the hope is that it is Liverpool with that all-important advantage!

8. ‘One of the biggest challenges’

With seven games to follow the trip to City, Klopp maintains that he is not viewing the game as a title decider as he spoke to reporters on Friday:

“I cannot decide what people think but we can just go through the possible results: if we win, we are two points up. If everybody thinks that’s done and dusted with the league, I cannot help.

“If we lose we are four points behind. If anyone thinks that’s it, I cannot change it, but I know nobody from a City point of view would think like that. If it’s a draw, one point behind. That’s it.

“A very important game, I’m really looking forward to it, one of the biggest challenges you can face in football, but that’s really nice, that’s why you do these kinds of things.

“We qualified for a great game with the season we played so far and I’m really happy we can be part of it. I can imagine a lot of people will watch it and we give it a try, that’s all I can say.”

9. Taylor in the middle

Anthony Taylor has been given match duties on Sunday, which led to a significant response online following the news, with the Manchester-born referee to oversee the biggest game of the season.

When you also factor in that Keiran Tierney is to presiding over VAR, you can understand some of the fume as Klopp even said to Tierney “I have no problems with any referees, only you” back in December.

They would not have been the only referee pairing to be met with frustration such is the Premier League‘s refereeing standards, but one can only hope, as ever, it is not the main talking point post-match.

Looks like we will be getting some Gary Neville, Jamie Carragher and Martin Tyler action on Sunday with Man City vs. Liverpool live on Sky Sports, starting at 4pm (BST) ahead of the 4.30pm kickoff.

If you can’t tune in or fancy an alternative way of following the match, This Is Anfield’s matchday live blog is just the place for you with Dan Clubbe to keep you entertained from 3.45pm.