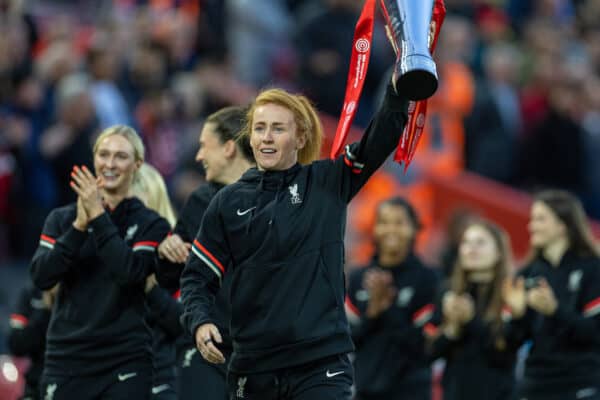 With the Women’s Euros underway and attention on England’s winning start, day two of the tournament brought a historic moment for Liverpool’s Rachel Furness.

England kicked off their Euro 2022 – for which they are hosts – with a 1-0 victory over Austria on Wednesday, with Beth Mead’s goal the difference on an evening that saw You’ll Never Walk Alone played at Old Trafford.

It was a feel-good start to the tournament, which culminates at Wembley on July 31 – the same weekend as the Community Shield, which has seen Liverpool vs. Man City moved to the King Power.

Thursday brought the second game of the group stage, and a first-ever appearance for Northern Ireland as they took on Norway at St Mary’s.

The odds were stacked against Kenny Shiels’ side, and it was a tough night as goals from Julie Blakstad, Frida Maanum and Caroline Graham Hansen put Norway 3-0 up before half-time.

But the start of the second half brought a historic moment for the nation, with Furness at the heart of it as Northern Ireland netted their first-ever goal at a major tournament.

A whipped corner caused problems for the Norway defence, with a lack of communication allowing Abbie Magee to keep it alive before Furness’ mishit shot fell perfectly for Julie Nelson to head home.

It was a landmark goal for Northern Ireland, and though it meant little in the context of the game, it sent the players and fans into raptures.

Norway ultimately won the game 4-1, with Guro Reiten wrapping up the scoring in the 54th minute to go top of Group A, above England.

Furness began the tournament as Liverpool’s sole representative, but following the signing of Emma Koivisto from Brighton, the newly promoted Women’s Super League side now have two.

Koivisto could be in action on Friday evening, as Finland take on Spain at Stadium MK.