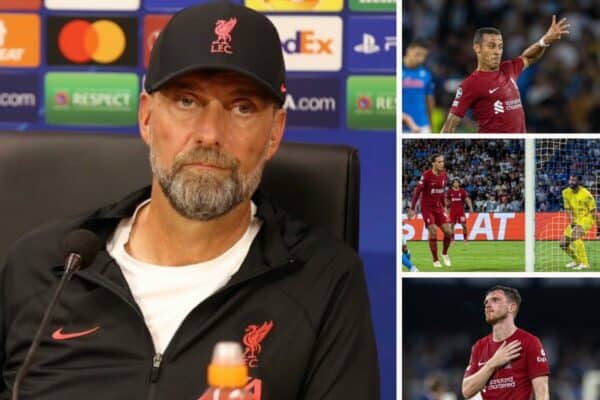 Jurgen Klopp cut an honest figure as he talked apologies, high lines and reinvention after Liverpool’s dismal 4-1 defeat against Napoli.

Here are four key points from the manager’s press conference after the defeat in Italy:

‘I had to say sorry’

After the final whistle, Klopp made his way over to where the travelling fans were located in the stadium and he felt it was the least he could do after all they invest into following the team.

“It’s a long flight from Liverpool to Napoli, all the things people invest. I understand it 100 percent, it was a very disappointing night.

“Of course, I had to say sorry to the fans.”

The manager uttered the words ‘reinvent ourselves’ a number of times to different outlets after the defeat, and that could mean any number of things.

From personnel to systems to approach, anything and everything is susceptible to scrutiny, not only after this defeat but the poor start to the season. And Klopp clearly expects more.

“We have to kind of reinvent ourselves. Basic things were not there. It’s a difficult period, no doubt about that,” he said.

“If you are not playing exceptionally well you can still defend on a really high level, you should be able to do that – and we are but in this moment we are kind of in between.

“It’s not that we have to reinvent a new kind of football, we always try to improve, but at this moment everyone one would be happy if we could play similar stuff to what we ‘used’ to play.

“That was the least compact performance I’ve seen from us for a long, long time. Napoli were really good, but we made it easy for them.”

‘High line is not the problem’

The defensive line has always drawn attention, when it goes right you see that offside flag raised more times than you’d care to remember or one counter-pressing moment after another.

When it doesn’t, the scrutiny comes from everywhere and it’s down to the pressure Liverpool can put on the ball – which was nonexistent for more than two-thirds of the game at Napoli.

“We were never compact. I cannot remember a situation where we were compact. We had not one counter-pressing situation in 60 minutes,” Klopp explained.

“Just because we were too far away from everything. That means too wide in possession, we don’t push up with the last line, the midfield is not connected.

“The high line is only a risk if we don’t have pressure on the ball. If we have a high line and we don’t have any pressure, yes, then it is a risk – but it’s usually not the case.

There are injuries, yes, but it does make some of the personnel choices seem odd, right?

Tuchel inspired this line of questionning

In light of Tuchel’s sacking this week, the manager was asked if he was worried a similar fate would befall him after Liverpool’s start to the campaign, the answer was pretty clear.

“There are different kinds of owners, our owners are rather calm and expect for me to sort the situation, not thinking someone else will sort it.

“That’s how they always sort it and the day they change their thoughts they may tell me.”