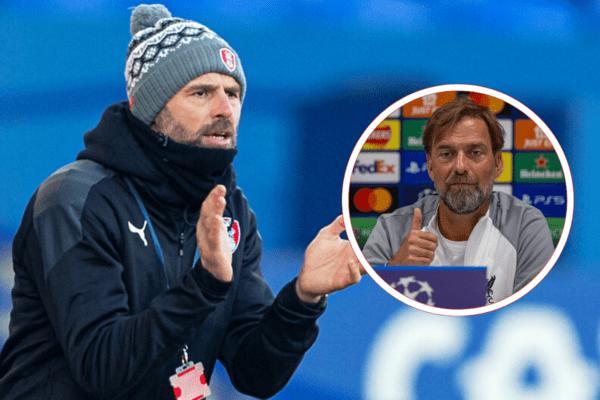 Speaking to the media ahead of Derby’s League Cup clash with Liverpool, manager Paul Warne revealed the emotional reason why he is hoping Jurgen Klopp will agree to a special photo.

The two managers will go head-to-head for the first time at Anfield on Wednesday night, with Warne leaving Rotherham United to take over as Derby boss earlier this season.

He went up against Pep Guardiola when his Rotherham side were beaten 7-0 by Man City in the FA Cup in 2019, and has revealed how the Spaniard did not invite him into his office for a chat after the game.

But Warne has a special reason to catch up with Klopp on Wednesday, having revealed that he wants a photo of the Liverpool boss with his thumbs up for his sister-in-law, who is currently going through chemotherapy.

“I didn’t go into Pep’s office – I didn’t get invited in,” he told reporters, as quoted by the Derby Telegraph.

“Non-English managers aren’t ever as keen. So I’ve managed against loads of managers of different nationalities but it’s very much a British thing. They love going in after.

“If Jurgen invites me in then great because my sister-in-law is a big Jurgen fan and she is fighting chemo at the moment.

“Everyone who loves her has sent her a picture of themselves with their thumbs-up and it is on her wall going into her bedroom so she can see them all. I need to get a picture of Jurgen.

“If I don’t get a picture of him then one of my very good friends is a physio there so he will get it for me.”

The Derby boss is also hoping to speak to Klopp about matters on the pitch, including his training methods and preparations for the game.

Klopp is usually more than happy to speak to his opposite number before and after matches, with Warne claiming Guardiola offered “zero” interaction during that FA Cup tie three years ago.

“I would like to think we’d go into his office, not because I am star-struck,” Warne continued.

“But I’d like to go in and ask him (Klopp) about a couple of aspects of his training. I’d also like to know what research he did on us and what he felt our weaknesses are. You learn quite a lot from speaking to managers.

“And you also learn that the pressures and the difficulties of the job aren’t just yours. It’s a bit cathartic. I didn’t go in with Pep at all – it was zero.”