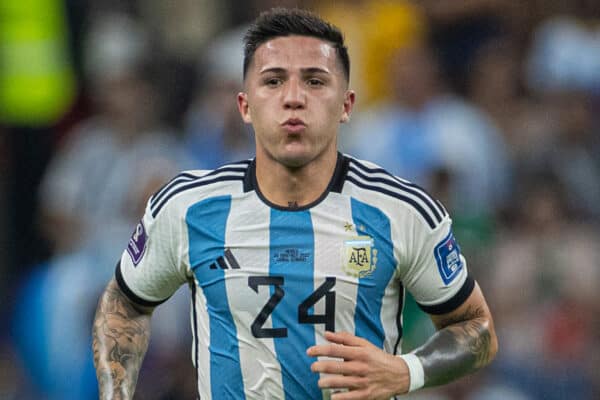 Cody Gakpo is close to officially being unveiled as a Liverpool player and the club are not closed off to making further January additions, but a reporter has stated Enzo Fernandez won’t be one of them.

The Reds have two glaring needs to address, the forward line and the midfield.

The former they’ve looked to bolster with Gakpo in a £37 million deal with PSV, while there has been no shortage of midfielders linked with the club over the last few weeks.

Argentina’s Fernandez has been one of the names widely tied to Liverpool, with a January transfer away from Benfica said to be “increasingly possible” by various outlets.

But according to Merseyside journalist David Lynch, the Reds will not be in the battle for his signature in the winter window despite “not ruling out further signings” in January.

Liverpool not ruling out further signings in the January transfer window but Enzo Fernandez won’t be one of them. Jude Bellingham their number one midfield target and unlikely to move before the summer.

Fernandez is to demand a hefty fee, in excess of €100 million (£88m), and Portuguese sources have credited Liverpool with having made “advanced” attempts to sign the midfielder.

However, in the words of Lynch that is not how it is to play out, but he does reiterate that Jude Bellingham is the club’s “number one midfield target” but a move is “unlikely” before the summer.

Despite the Mail recently suggesting a £60 million buy-out clause may exist, Borussia Dortmund’s head of first-team football confirmed back in 2021 that “there is no release clause.”

Bellingham is to demand over £100 million and while the Dortmund midfielder and Fernandez would require an outlay of over £200 million, Liverpool could structure deals to make it affordable.

That does not look to be on the agenda, though, but the club could be moving in a similarly quiet and efficient fashion, as they did with Gakpo, for an alternative midfield signing in January.

Prior to Christmas, Klopp said of winter signings: “January, in our situation, is a window where we always say we’re always prepared, that’s how it is.

“It’s always clear what kind of ideas we have, or how the necessity is from our point of view. But all the rest doesn’t lie in our hands, that’s clear. We always work with what we’ve got.

“You can imagine, with the situation that we’re in that we’re probably looking. If something happens, we’ll see.”