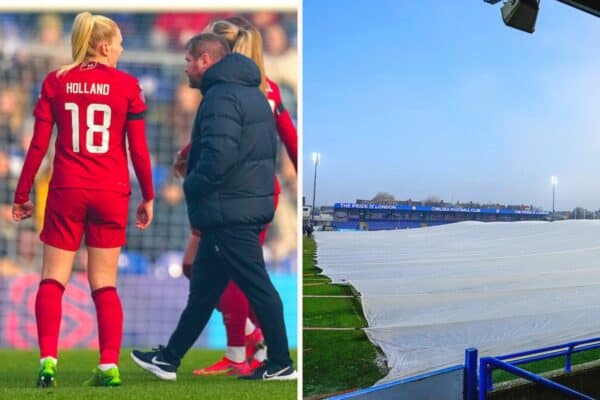 Liverpool Women’s WSL match against Chelsea was called off due to a frozen pitch just six minutes into the match, despite having passed an inspection earlier in the day.

The match was being held at Kingsmeadow, Chelsea Women’s home ground near London, and looked to be in danger of being called off when a pitch inspection took place at 9.30am GMT, three hours before kickoff.

The cold weather has seen a host of matches called off across the UK this weekend, with temperatures not expected to exceed freezing on Sunday.

Nonetheless, despite the early pitch inspection, and the idea of the game being pushed back to 2pm, the match went ahead at 12.30pm as planned.

But after just six minutes, the referee brought the game to a halt, informing both teams that he was calling the match off due to the frozen pitch.

Some Liverpool supporters set off for the game at 5am this morning, which will now need to be rescheduled to a later date.

This is absolutely ridiculous. Fans have travelled huge distances, a pitch inspection took place this morning and it looked very doubtful then it should have taken place. For the game to then start and be called off minutes after kick-off… Shambles. https://t.co/ilT6S270DP

?? on a serious note, one of the top leagues in Europe and we are cancelling games cause of frozen pitches. Not good enough, the women’s game is heading in the right direction but still a long way to go. https://t.co/I7Da1PqMl7

A match called off minutes after it kicked off. Women’s football deserves better ? https://t.co/GUPuaFZOGh

“I don’t know why it took six or seven minutes for us to find out that it was frozen,” Liverpool Women’s manager Matt Beard told BBC Sport.

“I’m just gutted for our fans, because they set off at 5am this morning to come down, when it could have been postponed at 9.30 because the pitch wasn’t safe.

“You look at the temperature, it wasn’t going to get above zero today. It’s frustrating all round, it shouldn’t have been played in the first place.”

Beard also confirmed that the referee had deemed the pitch playable this morning, only to change his mind minutes into the game.

“Whoever made the decision for the game to be on, it’s put players at risk today,” he added.

Chelsea Women manager Emma Hayes also expressed her dismay at the match being allowed to go ahead, and addressed supporters over the PA after it had been abandoned.

In the five minutes that were played, Chelsea‘s Erin Cuthbert hurt herself making a challenge in the penalty area, merely as a result of the impact her leg made with the hard surface.

Liverpool had made a promising start to the game, with several early opportunities against the league leaders, a team they beat at home on the opening day of the WSL season last year.