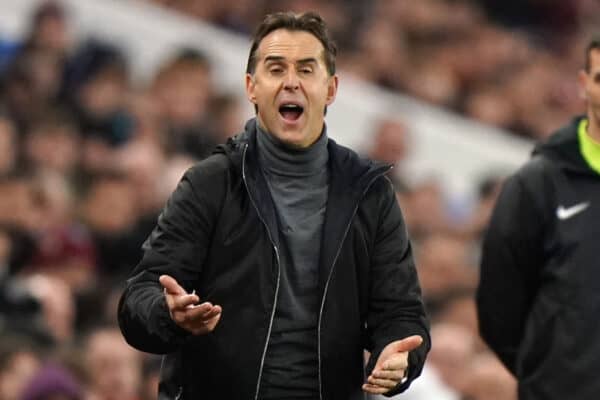 Wolves without 5 players vs. Liverpool – including £9m January signing

Ten days after their last meeting, Liverpool and Wolves meet again for a place in the FA Cup fourth round, and Jurgen Klopp is not the only one with injury absentees.

If you look up the word injury in the dictionary you may very well find Liverpool named in the description such is the close relationship they’ve formed this season.

A total of 22 Reds have missed at least one game due to injury this season, with only six having currently avoided any issue entirely.

Darwin Nunez is “very close” to a return but Tuesday’s cup clash may come too soon for the striker. Liverpool will not be eager to take risks when attacking options are slim.

Wolves boss Julen Lopetegui, on the other hand, could welcome Diego Costa back into the squad after missing the last three games, and Raul Jimenez will be in line for a start.

The hosts will be without Pedro Neto, Boubacar Traore, Chiquinho and Sasa Kalajdzic due to injury, in addition to their new signing Mario Lemina.

Lemina arrived in a £9 million move last week and Lopetegui wasted no time in handing the midfielder his debut off the bench against West Ham over the weekend.

However, the 29-year-old is ineligible for Tuesday night’s match having not been registered for the original third-round tie at Anfield.

What that means is that Reds could have the chance to take another closer look at summer target Matheus Nunes, who made quite the impression off the bench in the 2-2 draw.

Although Liverpool are in quite a slump, Lopetegui is expecting a reaction from Klopp’s side at Molineux.

“Liverpool are one of the best teams in the world,” Lopetegui told reporters. “The quality of his [Klopp’s] players, the coach, his history.

“I’m sure they’re going to come here and look to do a big match. We have to be ready to overcome them.

“The FA Cup is going to be an important aim for them – us too – we have to fight to overcome one of the best teams in the world.”