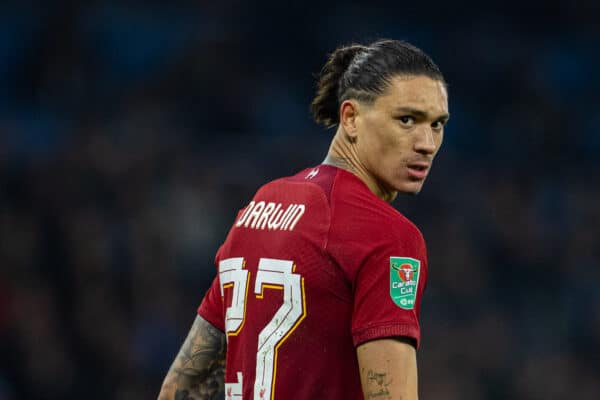 Jurgen Klopp has confirmed that Darwin Nunez is “very close” to returning from injury, but there are doubts he will be available against Wolves.

Liverpool head to Molineux for their FA Cup third-round replay on Tuesday night, humbled by a 3-0 defeat at Brighton on Saturday afternoon.

That trip to the south coast came without Nunez, who was absent due to a hamstring issue, which left Klopp to start Alex Oxlade-Chamberlain alongside Cody Gakpo and Mo Salah.

After defeat at the Amex, the manager will be desperate for a response from his side, but he is likely to be without his No. 27 again despite being “very close” to returning.

“[There has been] progress with all [players out],” he explained in his pre-match press conference.

“Darwin is very close, but it’s Monday and tomorrow is the game. But he’s very close.

“Milly and Stefan [Bajcetic] trained fully. Milly was on the bench [at Brighton] but wasn’t match-right. Stefan as well.

Roberto Firmino is still expected to be out, along with long-term absentees Virgil van Dijk, Luis Diaz, Diogo Jota and Arthur, while Klopp appears to be facing new issues, at least in the short term.

Asked whether he would rotate his side for the tie, he confirmed he would make changes and admitted that “not all players who played the last game are available now.”

“We go as strong as you can, but it always depends on the situation you are in,” he said.

“That means when the last game was and stuff like this. Not all players who played the last game are available now, for different reasons.

“Yes, we will make changes, that’s clear. But it’s good as well.

“What I mean with ‘as strong as we can’ is we want to win the game, so we need obviously fresh legs.

“The easiest thing for me is to sit here and tell the boys ‘with the game at Brighton you put us in the situation, so let’s have a look how you can get us out of that again’.

“But that would mean I’m out of responsibility and I cannot [do that]. I just can’t.

“We have to make decisions about the lineup. We will. We will make changes, that’s clear, three days after the last game, I think that makes absolute sense. Then we will go.”