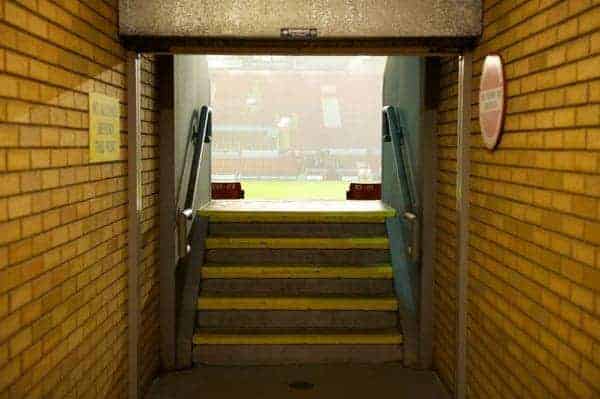 The interminable wait is nearly over, the new season is finally upon us. Matt Sproston (@Spros1) looks ahead to the first game of the new season. At 12.45 pm on Saturday Liverpool will start the new season against Stoke. Everything will be new, clean and fresh. The toilets in the Paddock will have had their annual lick of paint to mask the smell (the paintwork is now thicker than the brickwork). The loon who sits in front of me will have allowed his blood pressure to drop ready for a fresh assault on the nearby linesman with his trademark catchphrase “you’re a sh*t b*stard!!!” The fans will be casting their eye over the revamped squad looking for a scapegoat to replace Downing.

I can’t wait. The last few months have dragged forever. I suppose this is largely due to the previous season effectively being over by February. Relative inactivity in the transfer market from us and most of our rivals doesn’t help either.

On top of that we have had the brain numbing saga of he who will not be named. Every twist, turn, legal wrangle, facial expression, wave or non-wave, training photograph and Uruguayan journalist’s tweet has been pored over by fans looking for a meaning to it all. Let me tell you this, until the transfer window “slams shut” (© Sky Sports News), that saga will run and run.

The build-up to the first game of the season is a melting pot of hope, expectation, excitement, curiosity and anticipation. The reasonable performances from pre-season friendlies mean absolutely nothing. All that matters is 3 points against Stoke. A scruffy 1-0 win will suit me very nicely thank you.

Our results on the opening day of the season have by and large been awful. Just two wins have been recorded in the last ten seasons. Five draws and three defeats make up the rest. Having said that in the previous ten years we’ve only played three home fixtures on the first day of the season and two of those were against Chelsea and Arsenal. I hear Moyes is already moaning about United’s start to the season, try taking a look at ours from last season.

The importance of the first game of the season should not be underestimated. The two wins mentioned above were followed by two of our four highest points tallies in the Premier league era. Coincidence? Probably, but getting an early win doesn’t half help calm the nerves. The worst thing about dropping points on the first day of the season is the horrible realisation that you’re playing catch up and it’s not even September.

Stoke at home represents a serious opportunity to get our season off to a flying start. Like us, they’ve not really strengthened yet so the line-ups and formations of both teams will be relatively familiar. They’ve got a new manager in Mark Hughes who I can’t see changing their style of play as much as their fans are hoping. I think back to his Blackburn team which was very aggressive and direct. However, even the slightest reduction in aggression or direct play will be welcomed by our more diminutive squad.

I heard one of their fans on the radio suggesting that they will come and park the bus. Sounds similar to the corresponding fixture last year. I genuinely cannot see it working again. In Coutinho, we have a player that will thrive on unpicking Stoke’s lumbering defence. He will be the key.

The fans may need to show patience. There was (understandable) frustration in the crowd during the game last season and this led to us losing rhythm. Like it or not, the Rodgers’ passing game is designed to break teams down patiently. Resorting to a direct approach, particularly against a team like Stoke, is doomed to failure.

Despite saying that I would take a scruffy 1-0 win, I’m predicting that it will be a bit more comfortable and I’ll go for 2-0 with Gerrard and Aspas getting the goals.

So I’m going into the match with optimism that we’ll get three points. The mood in the squad seems positive. Even he who will not be named is smiling again….