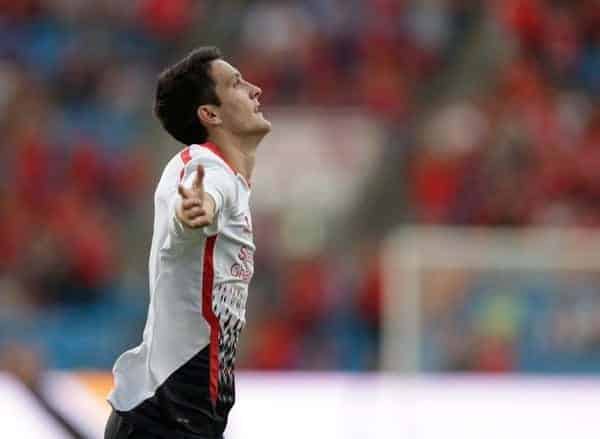 Liverpool overwhelmed Valerenga in their penultimate pre-season friendly in Norway, with new signings Luis Alberto and Iago Aspas getting on the scoresheet.

[team1]Jordan Henderson captained the side from the start of the game, with Daniel Agger, Martin Skrtel, Glen Johnson and Daniel Sturridge left at on Merseyside injured.

Liverpool principal owner John Henry was in attendance with his wife Linda Pizzuti – their first Reds game in over a year.

Iago Aspas went close after 15 minutes when his goal-bound shot from close range was deflected for a corner.

A flurry of activity on the half hour mark saw Aspas denied from point blank range by the Valerega goalkeeper Kongshavn. A remarkable save by the Norwegian.

Minutes later, Aspas’s chip came back off the crossbar. As Valerenga rushed to clear it, Luis Alberto struck a beautifully executed strike from the edge of the area, low and buried in the bottom-corner for Liverpool’s opener.

But the lead was short-lived, when a simple corner and header saw Giancarlo Gonzalez equalise. Henderson was the man in charge of Gonzalez, who ran and lost the Reds midfielder for a clear header on goal.

It was the first goal Liverpool have conceded during pre-season this summer.

Aspas was denied a penalty on the restart when he was blatantly brought down inside the area. He continued to give the Valerenga defence problems.

On the stroke of half time, Aspas’ frustrations ended when he found the net. A simple goal, ball out wide to Downing who delivered a low cross for Aspas to tap home from close range as the Reds went into the break ahead.

Less than 10 minutes into the second half, Liverpool extended their lead with a scrambled goal from Martin Kelly from a Philippe Coutinho corner.

Kolo Toure looked like a good attacking threat at corners as the second half progressed.

A great tackle from Andre Wisdom denied Valerenga what would have almost certainly been a goal back just before the hour mark.

Fabio Borini found himself at an impossible accute angle on 64 minutes, sliding the ball across the face of the goal, showing good work rate.

Borini continued to look lively throughout the half, hitting the crossbar from the edge of the area on 76 minutes, but failed to get on the scoresheet.

Coutinho once again showed displays of exciting, driving runs from midfield, but his final ball forward lacked in quality on several occasions.

His mazy run in extra time set up Oussama Assaidi to flick the ball into the path of Raheem Sterling who scored Liverpool’s fourth of the evening.

Liverpool now head to Ireland for their final pre-season game of the summer against Celtic in Dublin (Saturday, 10th August 2013).

Then it’s the real thing – Liverpool vs Stoke City on Saturday, August 17th at Anfield to open the new Premier League season.