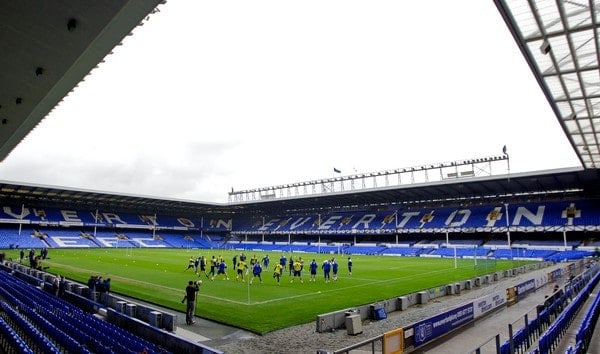 Ahead of this Saturday’s meeting, Neil Collins looks back at Merseyside Derbies at Goodison Park In the Premier League, friending controversy, excitement, and good success for the men in Red. Goodison Park has certainly been one of our happier hunting grounds in recent years. Despite a barren spell in the 90s, Liverpool have won nine out of the last 13 league games at Everton. Here’s the nine Premier League clashes where the Reds made the short trip across Stanley Park and returned home with all three points.

Gary McAllister practically needed a pair of binoculars to see Paul Gerrard’s goal whilst sizing up his injury time free-kick. No Kopite actually thought he would shoot from 44 yards, but he somehow found the bottom corner.  Cue mass delirium on the Red half of Merseyside as Macca grabbed a 94th minute winner with Goodison emptying at record speed.

It looked as though all was lost when Fowler’s penalty bounced back off the post, as Jeff Winter equalled the score down the other end for Hyypiä’s foul on Ferguson. With the Reds down to 10 men following Biscan’s red card, Unsworth belted home the spot-kick.

Earlier Heskey had drilled Liverpool into the lead with his 21st goal of the season (yes, you did just read that right), before Big Dunc equalised and revealed an unfortunate Everton tattoo on his bicep. Babbel rifled home our second, which looked to have settled the game before a frantic finale made this derby unforgettable. Incredibly, this was our first win at Everton since 1990 and the first at the ninth time of asking in the Premier League.

This clash will be most remembered for the spectacular goals that bookended the 3-1 win. Stevie G cancelled out Campbell’s early opener with an unstoppable swerving effort. He then ran the length of the Bullens Road stand lapping up the enslaught of V-flicking hurled his way. Owen then slotted home a penalty to give the Reds the lead before the break.

Riise capped the victory early in the second half with a stunning solo strike. A new hero was born as the Liverpool fans asked the Norwegian ‘how he scored that goal.’ Danny Murphy may forever be remembered for his three winning goals at Old Trafford, but his long-range stunner in this Easter weekend encounter shouldn’t be forgotten.

Owen gave the Reds a first half lead with his sixth league goal in as many games. Carragher then conceded a pen on the hour-mark, which Unsworth converted. Within six minutes the Reds restored the lead though as Liverpool’s No.13 proved lucky once again. And typically the derby wasn’t without it’s controversies as Naysmith and Weir were dismissed.

After a slow start to the season, Liverpool sprang to life with this comfortable win. Owen scored a pair of close-range efforts minutes before and after half-time. Yet, Ferguson’s late free-kick looked to have thrown the Blues a lifeline. However, the Scot’s uncharacteristically classy effort came crashing down off the bar. Moments later Kewell made amends for missing an open goal the previous week at Villa by rifling home his first for the club.

Liverpool steamrollered to their ninth successive league win as Rafa claimed his first victory at Goodison. The Reds flew out of the blocks as Crouch rounded Martyn and Gerrard then smashed in a deflected 25-yarder to give us a 2-0 lead inside 20 minutes. Beattie had a goal disallowed for heading home a deadball, before he got Everton back into the game with a clever flick.

Yet, Liverpool put themselves out of sight immediately after the break thanks to Cissé’s fine finish from an angle on his derby debut. Bad went to worse for Everton as Neville and Arteta were both sent off in the dying moments. This confrontation was by far the most controversial derby in recent times. Everything was going swimmingly for Everton when Hyypiä sliced Stubbs’ cross into his own net. But then, step forward Mark Clattenburg. Firstly, Hibbert felled Gerrard as the last man, but the ref appeared to be going for a yellow card. A brief word from our skipper correctly changed his mind though. Kuyt equalised from the spot, but then got away with a WWF-style dropkick on Neville.

Lucas’ goal-bound effort had seemingly snatched victory in injury time before Neville’s Superman dive clawed the ball off the line. He was swiftly sent off and Kuyt’s pen squirmed passed Howard. There was still time for Carragher to manhandle Lescott in the opposite area, which Clattenburg waved away (as he did with an earlier offence from Finnan). And to further rub it in, Carra then raced the length of the pitch arms aloft to celebrate with the travelling Kop.

Clattenburg didn’t take charge of another Everton game for five years and he’s never returned to Goodison since. Shame he won’t be around this Saturday to repeat his Man of the Match heroics. Fernando Torres struck twice within three minutes to leave Everton feeling blue again. El Niño was at his career peak despite not scoring in his last six games (that was the extent of his droughts back then).

Frustration was creeping in around the hour-mark before the Spaniard volleyed home Keane’s cross, and then smashed a loose ball into the top corner moments later. Everton’s misery was compounded by the dismissal of Cahill. His reputation went before him though. That punching of the corner flag looked well aggressive. Benítez was starting to feel the heat as Liverpool’s title and European hopes vanished. However, Rafa’s Reds produced a gritty performance with Mascherano’s 25-yarder taking a huge deflection for the early lead. Everton dominated large chunks of possession and Jô even had the ball in the net twice; but both were ruled offside.

Yet, against the run of play Kuyt proved the scourge of the Toffees again. Riera’s drive was too hot for Howard to handle; leaving Dirk with the simplest of tap-ins. Andy Carroll edged a little closer to justifying his huge price-tag by thumping Liverpool into the lead. It was only the ‘Undivine Ponytail’s’ fourth goal since arriving in January 2011, but he would go on to score a Wembley winner against Everton in the FA Cup Semi-Final.

The contest had been evenly matched until Rodwell saw red for a fair tackle on Suárez. With the numerical advantage, the Reds surged forward with Suárez winning a pen. However, Howard kept out Kuyt’s effort, whilst Adam thundered a 20-yarder against the bar. Yet, as the game ebbed towards a stalemate, Carroll broke the deadlock. Suárez added a late second as the bitter Blues in Gwladys Street end showered the celebrating Uruguayan with empty pop bottles. Good times.