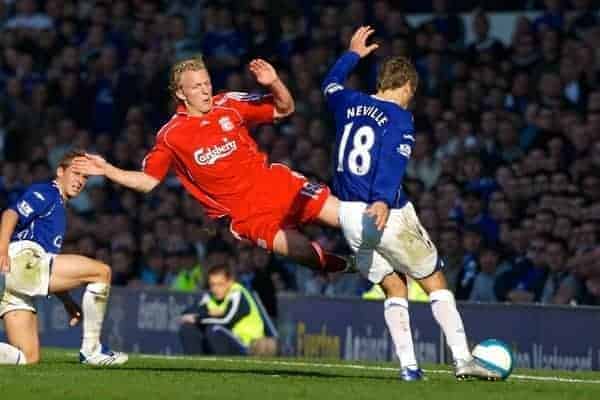 Was this the most dramatic Merseyside derby ever?

Ahead of this weekend’s 221st Merseyside derby, Henry Jackson takes a look back at arguably the most controversial, enthralling clash between Liverpool and Everton in recent times.

October 20th 2007 was a day that left Reds fans around the world absolutely delirious, and Evertonians feeling more than a little aggrieved with referee Mark Clattenberg. Rafa Benitez’s side were fancied by many to earn the three points at Goodison Park, but not many could’ve predicted the way the game would pan out.

The Reds had to make do without new star signing Fernando Torres, who was suffering from a groin injury, while Everton‘s talisman James McFadden was missing for the hosts. Steven Gerrard was deployed on the right hand side of midfield; one of Benitez’s preferences in those days.

After a tight opening to the game it was The Toffees who landed the first blow, via Sami Hyypia. The Reds legend miscued an attempted clearance straight past Pepe Reina and in off the post, in what was a hugely rare error by the former Reds captain.

It gave Liverpool an uphill battle going into the second half.

The game turned on its head in the 54th minute, however. A sensational burst on the break by Steven Gerrard eventually led to the skipper being hauled down by Tony Hibbert in the box. Clattenberg awarded both a penalty to Liverpool and a red card to the Everton defender. Goodison was incensed that Gerrard had used his powers of persuasion of get Hibbert sent off, but it was as clear a red card as you are ever likely to see.

Dirk Kuyt, given penalty duties on the day, stepped up and sent Tim Howard the wrong way. The Reds were then frustrated for the next half an hour or so, creating numerous chances but not quite being able to finish them off. Benitez’s decision to substitute Gerrard for young Lucas Leiva in the 71st minute seemed mind-boggling, but the Brazilian would play a key role in the outcome of the game.

In stoppage time, yet another Liverpool attack eventually saw the ball fall to the 20-year-old Brazilian, who was pretty unpopular at the time with many Liverpool fans, and his effort was saved on the line by Everton skipper Phil Neville. The former Manchester United man was dismissed for deliberate handball, and it was left to Kuyt to seal victory. The Dutchman’s second penalty of the game crept under Howard, sending the away support into raptures.

There was still time for further controversy, though. Jamie Carragher appeared to haul down Joleon Lescott in the hosts penalty area, but Clattenberg waved away the huge appeals. In fairness it looked an obvious penalty, but not one Liverpool player or fans cared about that when the final whistle blew.

It was a fantastic game of football, and one that will live long in the memory for all Reds fans.

What do you think is the most dramatic and controversial Merseyside Derby of all time?