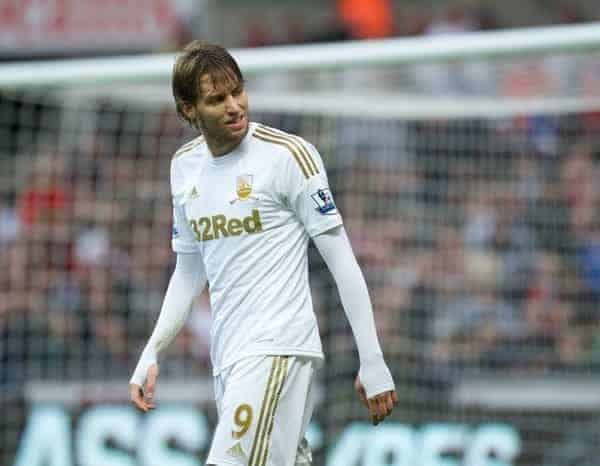 Swansea City striker Michu says he would like to see Liverpool striker Iago Aspas go on-loan at the Liberty Stadium in January. Michael Laudrup’s side were among a number of clubs persuing the former Celta Vigo striker in the summer, before Liverpool signed the 26-year-old.

Aspas has had a stuttered start to his career at Anfield after a handful of disappointing performances at the beginning of the season and then a thigh injury which ruled him out of action for over two months.

“We (Swansea’s Spanish players) are hoping he can come here on loan,” said Michu on BBC Sport.

“It would be a pleasure to play with him. Iago has had injuries, but he has quality.

“He deserves to play in the Premier League. He has been unlucky.

“At Liverpool, they have Luis Suarez and (Daniel) Sturridge, who have scored a lot of goals.

“Suarez is, along with Diego Costa and others, one of the best strikers in Europe.”

To date, Aspas has made just seven appearances for Liverpool and a loan spell elsewhere could help him settle into the English game.

However, Liverpool are short in options up front, having already sent Italian forward Fabio Borini on-loan to Sunderland for the season.

Would you allow Iago Aspas to go on loan until the end of the season? Vote in the poll and let us know your thoughts in the comments below, or on Twitter @thisisanfield.