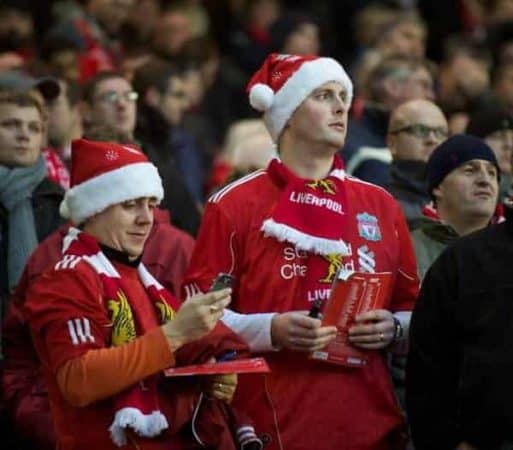 The next two weeks will define Liverpool’s season as we enter the congested festive schedule. Rodgers’ Reds face unenviable visits to Man City and Chelsea; bookended by potential banana skins at home against Cardiff and Hull.

Yet, following last week’s five-star show Liverpool have plenty of reasons to be optimistic, and our form over the Christmas period has usually been great throughout the Premier League era. Here’s a countdown of 10 of the best.

Stewart Downing produced his best performance for Liverpool, but it will still be remembered for him shushing the Kop. Whether it was meant for his critics in the stands or in the press was unclear, but it was still ridiculous considering it was his first league goal and assist in 45 appearances.

Škrtel thundered Liverpool in front early doors from Gerrard’s corner, and the skipper then drove in a second from Downing’s cross. The winger then rifled home five minutes into the second half, before Suárez wrapped up the scoring with a cool side-footed finish in injury time.

It was going to need a strike of genius to break through a stubborn Bolton defence, and after an hour of trying it was Crouch who did so with a stunning bicycle kick. It was the beanpole striker’s second overhead volley of the season too following a similar effort against Galatasaray.

Gerrard further punished the Trotters by superbly converting Kuyt’s cross two minutes later; before the Dutchman drove in a third.

Liverpool forced themselves back into the title race with this fourth successive win.

Both sides cancelled each other out in a competitive first half. Yet, many Kopites hadn’t even returned from their half-time pie and pint when Owen lashed Liverpool into the lead a minute after the restart.

With 10 minutes remaining Fowler converted two close-range finishes within four minutes, before Haaland headed in a consolation for the visitors moments later.

Fowler continued his white-hot form with a scorching hat-trick for the second season running against Arsenal.

It wasn’t all plain sailing though as Bruce Rioch’s men took an early lead when Ian Wright capitalised on a soft penalty.

Yet, an Arsenal defence missing Adams and Bould couldn’t contain the 20-year-old livewire. His understanding with Collymore was electric, with the ex-Nottingham Forest striker setting up the ‘Toxteth Terror’ on all three occasions – a thunderbolt, a close-range-finish and a header.

The ‘Rafalution’ began gathering momentum as this emphatic Boxing Day win at the Hawthorns demonstrated.

Riise broke the deadlock with an angled volley, but the Baggies were given a momentary respite when Baros’ tame penalty was saved following Contra’s dismissal.

Nevertheless, the Reds plundered four goals in the second half thanks to a Sinama-Pongolle close-range volley, belters from Riise and Gerrard; plus a García tap-in.

Rafa’s Reds steamrollered to their ninth successive Premier League win as the Spanish manager tasted victory for the first time at Goodison.

Liverpool flew out of the traps as Crouch rounded the keeper and Gerrard then smashed in a deflected 25-yarder within the opening 20 minutes. Beattie got Everton back into the game though with a clever flick just before half-time.

Yet, Liverpool put themselves out of sight immediately after the restart thanks to a fine finish from Cissé on his derby debut. Bad went to worse for Everton as Neville and Arteta were dismissed late on.

Stan Collymore haunted his old club with a goal and three assists as Liverpool produced an astonishing revival from two goals down.

A New Year’s hangover seemed to cling to the air at Anfield as Stone and Woan scored a quick-fire double. Roy Evans even joked that his side were “still singing Auld Lang Syne” early on. But two Fowler headers from Collymore crosses got Liverpool level before the break.

‘Stan the Man’ then silenced the away support’s “Judas” chants on the hour-mark with a simple finish; before forcing Colin Cooper to divert a cross into his own net to consolidate the comeback.

Gérard Houllier was enduring a tricky first season, and it wasn’t looking any brighter when Solano and Andersson gave the visitors a two-goal lead.

Yet, Liverpool produced a miraculous recovery in a frantic final 20 minutes to snatch a 4-2 win with Owen and Riedle both grabbing two poacher’s goals each.

Didi Hamann’s first visit to Anfield will not be remembered fondly by the German, who was sent off. And Newcastle boss Ruud Gullit’s day wasn’t any easier either as the game ended with the Kop mocking his “sexy football” claims.

Arsenal were flying high and winning games with a swagger, but few would’ve predicted how easily Henry, Vieira and Bergkamp et al would be brushed aside.

Gerrard set the tone for the game; drilling Liverpool ahead with a trademark drive on 10 minutes. Owen bundled in a scruffy second on the hour-mark, and Kopites were in dreamland when Barmby dinked home a third with 20 minutes left.

Fowler then extended his incredible record against the Gunners with a typically cool one-on-one finish in injury time.

Steven Gerrard produced a virtuoso display as the Reds destroyed Joe Kinnear’s Newcastle at St James’ Park. Liverpool hammered at the door for half-hour before the captain crashed home the opener off the post. Hyppia added a second five minutes later with a bullet header, but David Edgar somehow gave the hosts a lifeline on the stroke of half-time.

Yet, Liverpool continued to dominate Newcastle as if they were a Sunday League side throughout the second half; even with new signing Robbie Keane on the bench. Babel scrambled Liverpool’s third five minutes after the restart before Gerrard expertly finished a one-on-one.

Alonso added a late fifth from the spot, but much of the home support had headed for the exits long before.