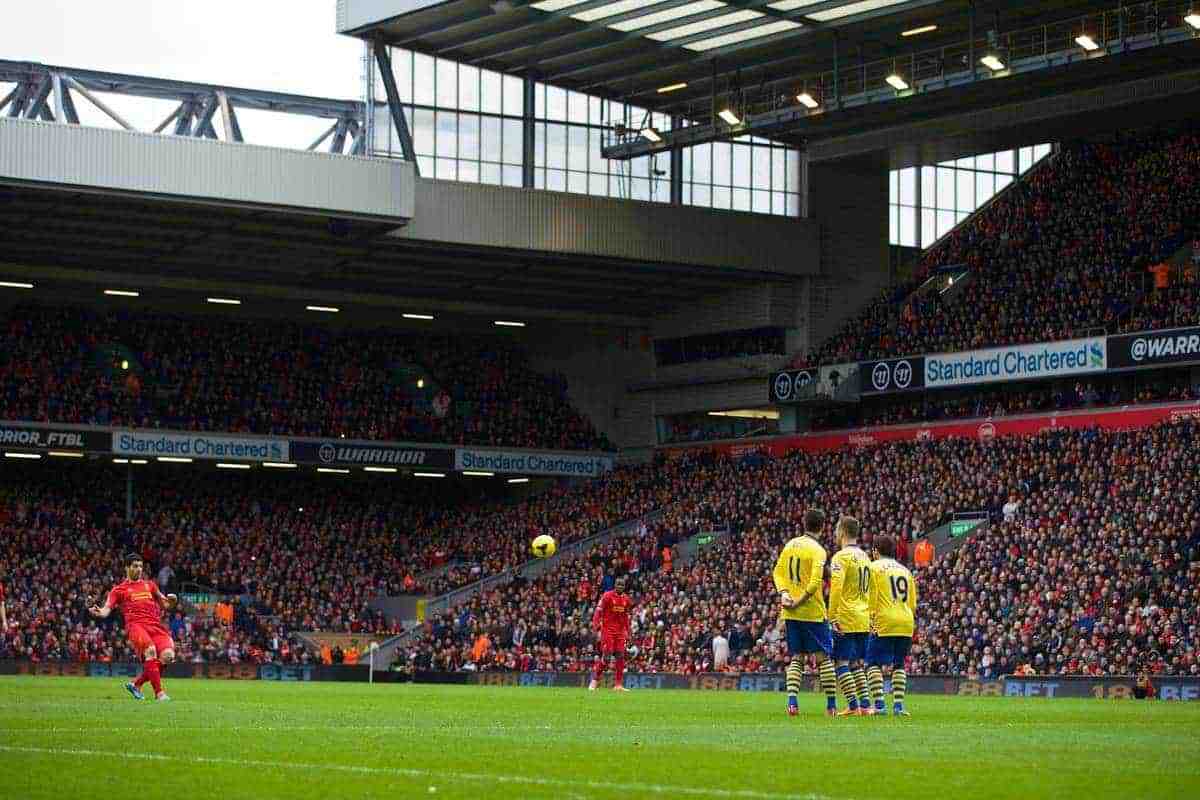 Adam Griffies discusses whether an away trip to Anfield is now beginning to be feared once again by Premier League opponents.

Not for the first time, a rendition of ‘There’s only one Brendan Rodgers’ filtered around Anfield from the Kop on Saturday afternoon, during the closing stages of an emphatic swatting aside of Premier League leaders Arsenal. The manager, standing proud, acknowledged with a wave.

The Northern Irishman is steadily cementing a place for himself in the hearts of wounded Liverpool fans; even the most fervent of Rodgers sceptics, who will tirelessly argue Benitez or Dalglish could have done superior jobs, are now desperately trying to drag themselves out of their bottomless pit of nostalgia to enjoy the attacking brand of football our current leader is engineering. Those who remain stubbornly unimpressed, know they are wrong.

That being said, I suppose you could dismiss those opening two paragraphs as subjective waffle. So I better provide some statistics. This season we have so far scored 63 goals in 25 games, including 38 in 13 home matches at an average of 2.9 goals per game. These sort of figures are frankly ludicrous, and are of course unprecedented for us in the Premier League era, dwarfing any other numbers. Poor Rafa, even in that magical 2008/09 campaign, could only boast two goals per game.

Okay, okay, I guess talk of the fastidious Spaniard will prompt you to question our defensive record under Rodgers. It’s awful, apparently. We’re a shambles at the back. Well if you bother to take a quick look at our record for this campaign, you’ll realise things aren’t as bad as is consensed. 30 goals conceded in 25 league games is no disaster when you consider Rodgers has been forced to chop and change his backline because of injuries throughout the season, arguably not once being able to field his strongest defensive quartet. Absences are particularly prevalent at the moment, with Glen Johnson, Daniel Agger, Mamadou Sakho and Jose Enrique, an entire back four in itself, all side-lined. This makes our recent solidity all the more admirable; with probably our fourth choice centre-back partnership, Martin Skrtel and Kolo Toure, we have conceded a meagre two goals in our last four games. Additionally, at home we have let in just nine goals all season, the joint-second best record in the Premier League.

Progress, particularly at Anfield, is undeniable.

Now as I’ve got that off of my chest, onto the game itself.

Arsenal strode into Anfield at 11:30 am with a content swagger, indicative of their position at the top of the table, and possessing the strongest away record in the 2013/14 Premier League: eight wins from 12 matches. They were unbeaten on our patch in their previous six visits. Arsene Wenger had never been so happy, having to invent new ways of releasing the abundance of anger and frustration he has always been inhibited by. The zip of his seven-eighths length, ridiculously long coat was seen as the ideal, helpless target.

By 1:06 pm, within 20 minutes of kick-off, the Frenchman found his shell-shocked side 4-0 down. It was a stunning start, surely never matched previously at Anfield, particularly in a fixture of this magnitude. Wenger didn’t know how to react, pitifully asking why a free-kick wasn’t given to Arsenal in the build up to our third goal, as the tireless Jordan Henderson won the ball from Mesut Ozil and bounded towards the Anfield Road net. Wenger knew it wasn’t a foul; he was just desperately in need of something to complain about. Mesut Ozil sat and watched, doubtlessly affected by his team’s predicament. Possibly.

Wenger’s February-fall-apart expression had now encompassed his face, as he contemplated another annual springtime capitulation.

Centrally, with a staggered one-two shape, we expertly monopolised what, on paper, looked a world-class Arsenal midfield. Jordan Henderson and Philippe Coutinho shuttled dynamically from opposing player to player, providing a constant springboard for fast, flowing red attacking waves. Behind them, Steven Gerrard controlled proceedings consummately, as he continues to grow into his new regista role. The Brazilian magician Coutinho looked every inch an all-round midfielder, executing six successful tackles, less than only his captain, and roaming deep to record 66 touches of the ball, more than any other Liverpool player. Coutinho’s burgeoning ability to play as part of a central trio is a bonus for us, giving us an extra option; the 21-year-old is proving he can play the determined role Joe Allen performs, but clearly with more guile.

Further forward, Yevhen Konoplyanka was frighteningly good. Sorry, Raheem Sterling I should say. His directness exemplified his current level of confidence, terrorising Gunners’ defenders with explosive, weaving runs. He deserved his two goals and was unlucky not to grab a hat-trick. After absurdly being written off by some last year at the age of 18 (yes, eighteen), the England international has clearly stepped up a level in recent months. You’d hope when, and not if, he next goes through another patch of poor form, he gets more backing from a lot of supporters.

It seems unfair to mention individuals, as everyone was very good on the day. And that is no exaggeration.

To be fair to Arsenal, Everton had hardly fared better against a similarly swarming Liverpool opening salvo 11 days earlier. Roberto Martinez’s men found themselves 3-0 behind after 35 minutes, and perhaps looked just as vulnerable to the Reds incessant, whirlwind attacking style.

And that’s the thing, this demolishing of teams is becoming a pretty regular occurrence, and not just against mediocre outfits. The Reds, unbeaten in their last 10 home games, have scored at least three goals in eight of their 13 Premier League matches at Anfield this campaign. That is some going.

Brendan Rodgers has unequivocally transformed us from a side which netted a miserable 47 goals in 2010/11, distinctly lacking attacking diversity and potency, to a fluent unit with, well, just that.

The manager’s explanation for his repositioning of our attacking trio in Saturday’s win was particularly impressive. Things were subtly changed from last weekend’s draw at West Brom to counter Arsenal’s strengths and prey on their weaknesses. “We shifted it about tactically,” Rodgers said. “We played Daniel Sturridge through the middle to try to exploit his speed centrally. Luis Suarez played in a wider role today and put in a selfless job. We switched Raheem Sterling over to the left side to penetrate and to control Sagna a little bit.” It’s this sort of proactivity and ingenuity which, in my opinion, makes the Northern Irishman one of the best young managers around.

Although it’s gone fairly unnoticed in the midst of such a stunning team performance, I also liked Rodgers introduction of 18-year-old Jordan Ibe in the 76th minute. The London-born winger got some invaluable Premier League experience against a host of big names and certainly didn’t look out of place or shy of confidence. It’s encouraging to see our manager continue to pick from a busy conveyer belt of young talent from the Academy.

Rodgers was replaced, when he came to Liverpool, at previous club Swansea by Michael Laudrup, leading to calls that the Welsh club had got the better deal. 18 months on, Laudrup was dismissed from his job with Swansea lingering perilously above the bottom three. Meanwhile, Brendan continues to take us from strength to strength. Oh the irony.

Upon making that switch from South Wales to Merseyside, Rodgers firmly stated “I want to use the incredible support to make coming to Anfield the longest 90 minutes of an opponent’s life. That’s the idea. I want to see this great attacking football with creativity and imagination, with relentless pressing of the ball.” It’d be hard to argue with the fact he’s achieving exactly that. Anfield is becoming a place for travelling sides to fear again.

And finally, a special mention to David Moyes: the gift that keeps on giving, and crossing.