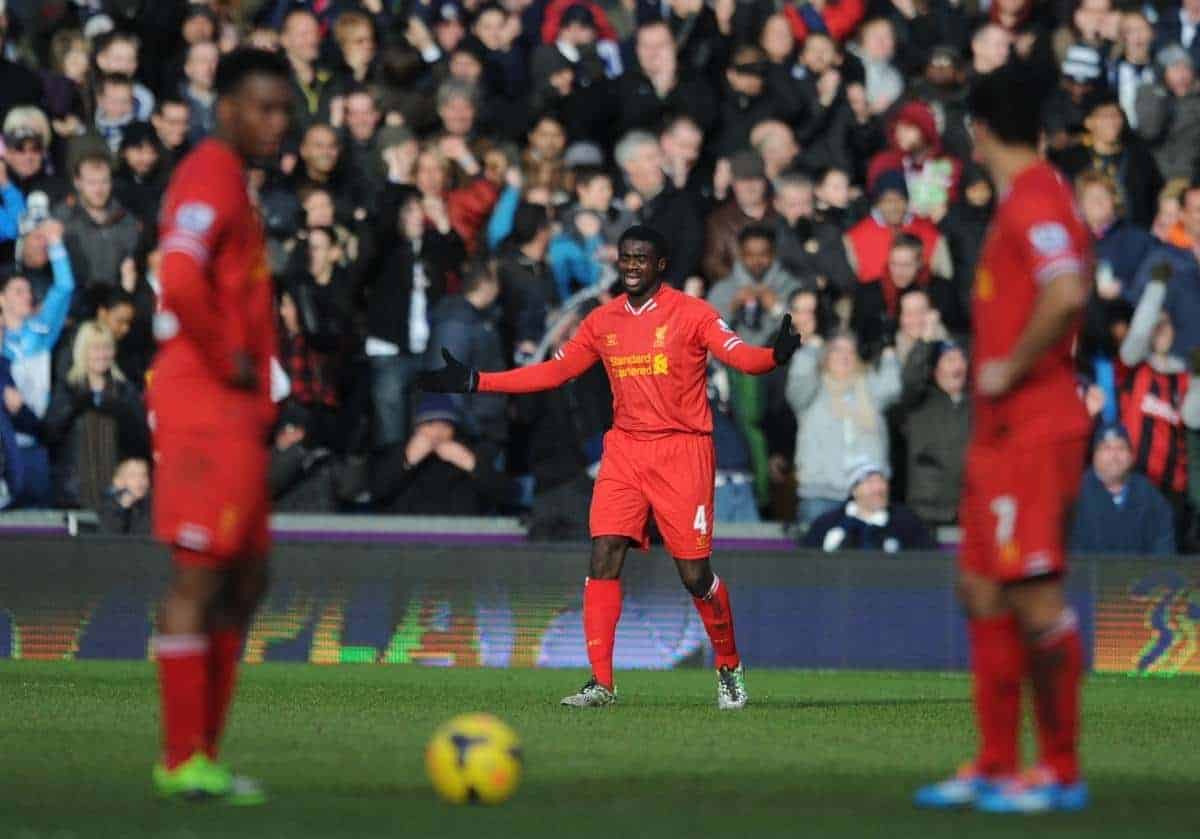 The Reds have produced some outstanding performances this season, but frequent mistakes from various players must be eradicated if Brendan Rodgers’ side are to finish in the top four, explains Henry Jackson (@OnFootballTweet).`

Kolo Toure’s disastrous loss of possession in Sunday’s 1-1 draw with West Brom cost Liverpool two vital points, as they look to qualify for the Champions League for the first time since 2009.

Considering the points dropped by Manchester United and Spurs, a win would’ve put Liverpool in total control of their own destiny, but an individual error cost them dear. It was yet another in a long line of them in recent times.

29 – Liverpool have made more defensive errors leading to a goal/attempt than any other team in the PL this season. Problem.

For all the terrific football played, excellent team spirit and brilliance of Luis Suarez and Daniel Sturridge, sloppy errors have been far too common. More often than not the ‘SAS’ have got Liverpool out of trouble- the 5-3 win at Stoke being a classic example- but they can’t keep doing it.

In fairness, the early part of the season looked as though Liverpool had improved drastically on the defensive naivety that dogged Rodgers in his first season at the club. Three 1-0 victories, against Stoke, Aston Villa and Manchester United emphasised this.

As as the campaign has progressed, however, more and more mistakes have crept in.

Several of these individual errors have come from set pieces. Aly Cissoho allowing Paul Dummett to score in the 2-2 draw at Newcastle and Daniel Agger allowing the same with Romelu Lukaku away to Everton are just a couple of examples. There have been even more from open play. All three goals in the 3-1 defeat to Hull were avoidable. Victor Moses lost the ball in a key area for Jake Livermore’s opener, a failure to clear the ball as a whole allowed Steve Bruce’s side to score a second, and Martin Skrtel scored a clumsy own goal to complete a miserable afternoon.

Simon Mignolet was badly at fault for Alvaro Negredo’s goal in the 2-1 defeat to Manchester City at the Etihad, in a game Liverpool genuinely deserved to get at least a draw from. Vincent Kompany also escaped the clutches of Skrtel too easily for his side’s equaliser.

The Negredo goal hasn’t been Mignolet’s only error this season, by any means. He let Samuel Eto’o’s shot past him too easily in the loss to Chelsea, fluffed his lines from a cross in the home draw with Villa- Steven Gerrard also lost Andreas Weimann for the opener- and let Jon Walters’ late effort trickle through him against Stoke.

In that unforgettable 5-3 win, Toure lost Peter Crouch far too easily for his goal and Jordan Henderson lazily lost possession for Charlie Adam’s thunderous strike too.

This is arguably the key component that is stopping Liverpool from being genuine title contenders at the moment; as well as a lack of squad depth.

If you look at the top Premier League sides over the last 20 years, they all have the same thing in common: they gave the opposition hardly any soft goals. Whether it be Arsenal‘s ‘Invincibles’, a number of United teams or Jose Mourinho’s Chelsea side between 2004 and 2006, they were ruthlessly efficient when they had to be.

Much as it may pain us all to admit it, you only have to look at Chelsea‘s performance last night in their win over City. They gave the much-fancied title favourites nothing. Whether it be Petr Cech, John Terry, Gary Cahill, Nemanja Matic or David Luiz, there was never a hint of an individual error creeping in. Liverpool lack this discipline at times.

All of those great sides would’ve beaten West Brom having gone 1-0 up on Sunday. They would either have held on for an ugly 1-0 win, or they would’ve killed the game off with a second. At the moment, Liverpool are completely incapable of winning when they are playing badly, which means they simply cannot afford to keep making error after error.

If Rodgers and his men are to kick on and hold off the likes of Everton, Spurs and United in the fight for a top four place, they simply have to stop giving away such avoidable, frustrating goals.