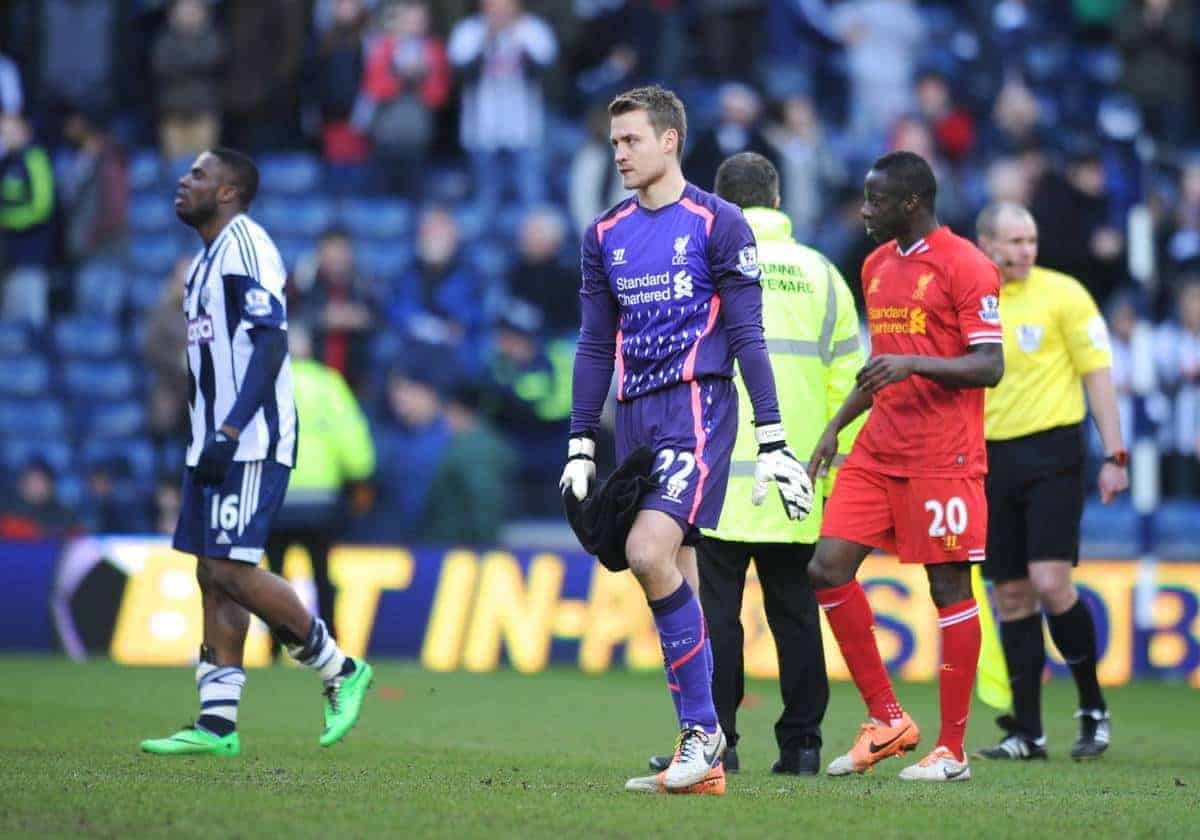 Liverpool produced a poor display against Pepe Mel’s side, blowing a chance to take control of the fight for 4th place in the process. Henry Jackson (@OnFootballTweet) rates each Reds player on the day. After some shaky performances of late, the 25-year-old Belgian produced his best display for a number of weeks. He made a tremendous save to deny Gareth McAuely, and did well to hold onto Chris Brunt’s free-kick too. Perhaps slightly to blame for putting Kolo Toure under pressure for the equaliser.

The youngster was as solid as ever, never allowing the experienced Brunt to get the better of him at any point. He is limited going forward, however, and it meant Liverpool lacked an extra dimension in attack compared to when an in-form Glen Johnson is playing.

Skrtel continues to be comfortably Liverpool’s best defender this season. The Slovakian was excellent from start to finish, thwarting West Brom‘s attacks throughout. He’s come such a long way since the disappointment of being dropped last season. Toure looked like a disaster waiting to happen all afternoon, and to be blunt, his performance is the reason Liverpool dropped two sloppy points. He was erratic on the ball throughout, and his inexcusable pass across his own goal gifted Victor Anichebe an equaliser. The return of Daniel Agger and Mamadou Sakho can’t come soon enough.

To be fair to Cissokho, considering how lowly he is thought of by many Reds fans, he had a fairly decent game at the Hawthorns. The Frenchman made a few good forward runs- his final ball did admittedly let him down- while defensively he was sound.

Gerrard had a very good first half, reading the game brilliantly from his new deep role and breaking up countless West Brom attacks. He faded after the break, however, as he and Jordan Henderson‘s stranglehold on the midfield battle started to wane. Not one of Henderson’s better games in a Liverpool shirt. A couple of times he was robbed in possession, and his influence on the game was nowhere near as noticeable as it has been in many games this season. A solid display nonetheless.

After a majestic performance in the Merseyside derby win over Everton, Coutinho never managed to impose himself on this game. The odd lovely piece of skill or dangerous dribble was often ruined by indecisiveness on the ball in key areas. He is guilty of holding onto the ball for too long at times.

Liverpool’s best player on the day without a shadow of a doubt, the 19-year-old is enjoying an excellent run of form at the moment. He was a constant pest to the Baggies defence, running at defenders with pace and purpose, and also worked hard when it came to his defensive duties.

Another game, another goal for the lethal Englishman, as he scored his 29th goal in just 36 games for the club. He was quiet in the second half, however, which was disappointing considering the importance of the game.

Not one of the Suarez’s finest displays, and the Uruguayan genius cut a frustrated figure at times. The 27-year-old set up Sturridge brilliantly for Liverpool’s goal, but missed a glorious chance to put the game to bed after the break.

Didn’t look as secure as Flanagan defensively, and seemed understandably rusty after so many injury problems of late.

As always neat and tidy on the ball, but lacked drive in midfield as Liverpool looked for a winner. Had a shot saved by Ben Foster.

How would you rate each Liverpool player on the day?