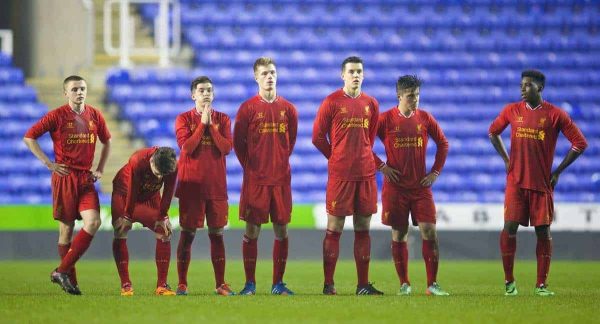 Liverpool have bowed out of the FA Youth Cup after losing on penalties to Reading at the Madejski Stadium – the quarter final had ended 4-4 after extra time.

It was cruel on the young Reds who dominated proceeding from start to finish but couldn’t make their control of the game decisive on the score board.

Liverpool may have scored inside a minute when Reading headed a corner into their own goal but the referee correctly judged there had been a slight push in the build-up.

Liverpool then settled into their regular game plan and knocked the ball around nicely with Sheyi Ojo and Cameron Brannagan influential whilst Harry Wilson tested the Reading goalkeeper on a couple of occasions.

However, Reading struck first with Harry Cardwell picking up on a Reading clearance and tricking his way superbly past Jordan Williams before firing in under Ryan Crump.

Liverpool kept pressing throughout the half but despite sustained pressure they couldn’t find their way past the Reading goalkeeper, an England U19 international, who made a string of excellent saves.

The second half began in much the same way with Reading sitting back on two banks of four and relying on the pace of Fosu or long throws of Fridjonsson to relieve pressure and launch attacks of their own. Usually tactics like this are reserved for first team matches with youth football focused on development but in fairness they were understandable in the circumstances of a Youth Cup quarter-final, probably the biggest game of most of these players’ lives so far.

Liverpool spent the opening ten minutes of the second half camped in Reading territory but simply couldn’t find that decisive final ball. The luck was summed up when Ojo was given the chance with an open goal but the bounce of the ball just took away the shooting angle.

Remarkably, amongst all this pressure Reading struck again taking advantage of a rare piece of possession, Harry Cardwell was there again to steer home from close range.

Substitute Dan Trickett-Smith hit the bar a minute later as it looked like Liverpool would never get the goal they deserved.

Eventually however the pressure told, Jordan Williams stepped up from centre back to fire in from 25 yards.

Suddenly Liverpool had the impetus again and right at the end of stoppage time Williams hit a cross field pass to Ojo who controlled first time, slowed the game down and allowed Maguire to make a run in behind. Ojo calmly laid the ball to Maguire whose pull back was met by the inspirational Jordan Rossiter on the edge of the six yard box and Liverpool were level, headed for extra time.

Sergi Canos, a second half substitute, came alive in extra time. First he pinched the ball off the Reading left back, nipped to the byline and pulled it back for Trickett-Smith to give Liverpool the lead with a smart finish.

Liverpool looked home and dry as Canos then played a wonderful through-ball to 16 year old Welsh international Harry Wilson who finished the one on one with cool precision.

However, the exertions of Liverpool’s high pressure style started to tell late into the second half of stoppage time. In quick succession Jordan Williams, Cameron Brannagan and Jordan Rossiter went down with cramp and it was while Brannagan was down that Reading got themselves back into the game taking advantage of midfield space that the stricken midfielder would have occupied.

There were also, sadly, some unsavoury behaviour from the Reading coaching staff at this time as they urged the referee to book Sergi Canos for kicking the ball away. While this may be commonplace in the Premier League it is completely against the spirit of the Youth Cup, unfortunately showing that some youth coaches still judge their record based on wins, not development. Until this changes across the board the level of young player produced in this country will not reach its potential.

Finally, an exhausted Liverpool side couldn’t keep out the resurgent Reading as substitute McLennan, who had earlier been involved in a tangle with Sergi Canos where he appeared to kick the Spanish playmaker in the head, blasted into the roof of the net following some tidy build up play on the edge of the penalty area.

Penalties were never going to be easy after such an emotional roller coaster and Reading looked the fresher of the two sides. Young midfielder Cameron Brannagan missed his spot kick which unfortunately proved to be the only miss. Once again it was cruel as Brannagan had arguably been Liverpool’s best player on the night.

So Liverpool bow out of the tournament but can hold their heads up high. They played tough highline football with high pressing and some wonderful, flowing football as well but they just couldn’t hold on as the tiredness took hold late on.

The young Reds are next in action against Blackburn Rovers on Friday night, it is a 7pm kick off at The Academy although it has been allocated as behind closed doors and will not be admitting spectators. The game is live on LFCtv though.