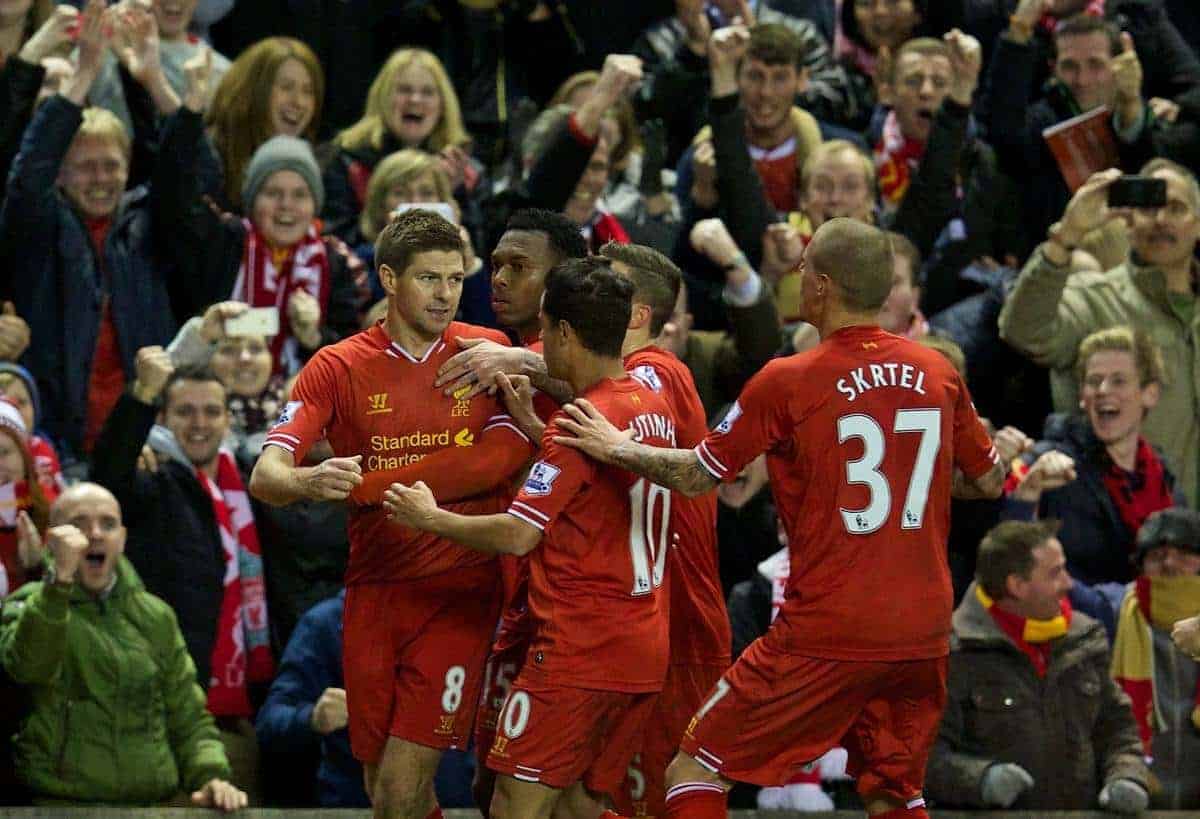 Liverpool overcame a tricky Sunderland team at Anfield to leapfrog Manchester City in the Premier League table. Steven Gerrard and Daniel Sturridge were the heroes on the night, although the Reds were left holding on at the end.

Brendan Rodgers made no changes to the side that beat Cardiff City 6-3 on Saturday, with Philippe Coutinho once again preferred to Raheem Sterling.

A frustrating opening to the game saw Liverpool struggle to get in behind Sunderland‘s stubborn rearguard. The Reds were restricted to long-range efforts, as Coutinho, Daniel Sturridge, Joe Allen and Luis Suarez all shot over the bar and into the Anfield Road crowd.

With the game drifting towards half-time, Suarez was brought down on the edge of the penalty area by Santiago Vergini. It was arguably a sending off offence, but he was only shown the yellow card by the appalling Kevin Friend.

From the resulting free-kick, Steven Gerrard bent a wonderful effort into the top corner, easing the nerves of the home fans hugely. Simon Mignolet saved well from Connor Wickham’s deflected effort, and Liverpool went in a goal up at the break. The second-half started tremendously for the hosts, and Sturridge’s brilliant curled effort from the right took a slight deflection of Wes Brown to double Liverpool’s lead.

From that point on, the Reds stuttered. Sunderland grew in confidence after the introduction of Adam Johnson and Ki Sung-Yueng, and Lee Cattermole rattled the crossbar with twenty minutes remaining.

Sturridge did the same a minute later, but it was a rare second-half opportunity for Liverpool. Ki pulled a goal back with a header from a corner after 75 minutes- another in a long list of sloppy goals conceded this season- but Rodgers’ side clung on nervously to go second in the table.

Rodgers again adopted the 4-4-2 diamond formation that he has done of late, with Joe Allen to the left of midfield, Henderson to the right and Coutinho in the hole behind Sturridge and Suarez.

There wasn’t always the same intensity and pressing as there has been in some games, but Liverpool eventually ground down Gus Poyet’s side after a frustrating first-half.

Defensively there are still concerns, with set pieces once again troubling the Reds greatly at times.

STAT: Liverpool have two players scoring 20 league goals for the first time since 1963/64 after Sturridge scored his 20th tonight.

STAT: Liverpool have now won 7 league games in a row.

STAT: Liverpool’s 83 goals this season is the 10th most ever for a Premier League side, with 7 games to go. The record is 103 by Chelsea.