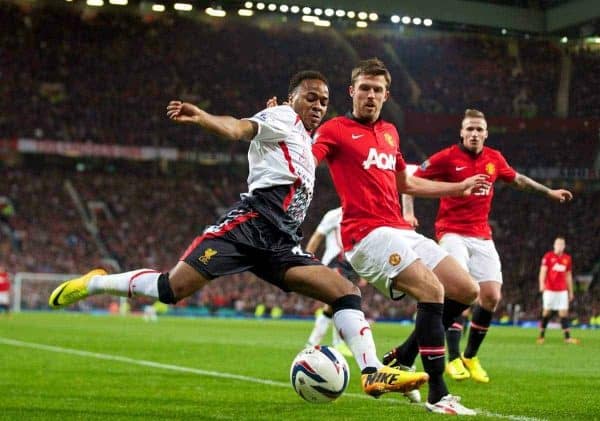 Adam Griffies (@whatahitsonlfc on Twitter) previews our trip to Manchester United this weekend.

Liverpool travel to Old Trafford to take on Manchester United this Sunday. The Reds will go into the game as favourites and looking down on their north-west rivals in the Premier League for the first time since I, and I’m sure most of you, can remember.

A win would see us edge closer to a Champions League place, yearned for since our exit from the competition in December 2009, and simultaneously surely leave Moyes’ Manchester United with just a Europa League spot to scrap for.

The Englishman’s strike partner, Luis Suarez, of course missed that match as he continued to honour his ban for biting Chelsea’s Branislav Ivanovic last season, but the Uruguayan is now in the form of his life and could prove pivotal at the weekend. In fact, Suarez and Sturridge have scored 42 league goals between them this season, just four less than Manchester United have managed collectively.

After a bout of significant injuries over the festive period, our squad is now almost at full strength again, with the Premier League our sole remaining focus. Mamadou Sakho and Lucas Leiva both played for Liverpool Under-21s last Friday, in a 2-0 away win at West Ham, as they continued their injury rehabilitation with some priceless competitive match practice.

The Frenchman, Sakho, was particularly impressive in that game; he looked strong and assured in his natural left-centre-back role, before being withdrawn with a touch of cramp in the 70th minute.

Thanks to Lucas’ and Sakho’s returns to fitness, Jose Enrique is now the Reds’ only injured absentee, with a long-term knee problem.

Sakho’s presence could be key on Sunday. United’s predictable tendency to get the ball wide and attempt a regular stream of crosses make the return of our best header of a ball extremely timely and appropriate.

On the other hand, after a clean sheet and relatively solid defensive performance in our last game against Southampton, Rodgers could be tempted to stick with Skrtel and Agger on a system of meritocracy.

The Northern Irishman, Rodgers, has guided us to a current nine-game unbeaten run, our longest in a single Premier League season since the final 11 games of 2008/09.

The second game of that sequence in 2009 was, of course, a mind-blowing 4-1 Reds win at Old Trafford at the identical stage of the campaign as this weekend’s meeting falls on. It couldn’t happen again, could it?!

Well, it’s long overdue. Since that Manc-mauling in 2009, Liverpool have lost every Premier League visit to Manchester United.

In my opinion, to give us the best chance of getting that win, we should make one or two changes in system and personnel from the team that started our last league game.

Brendan Rodgers deployed a 4-4-2 narrow diamond formation against Southampton, and while it worked to a certain extent, we relied on a couple of pieces of brilliance from Luis Suarez, and looked vulnerable in some areas.

One of those areas was on the flanks; when you play a narrow diamond your only genuine wide men are the full-backs. This left Jon Flanagan and Glen Johnson with too much to do and gave Southampton some joy from the sides, particularly with the bombarding Luke Shaw on their left.

With United’s bias to attack down the wings, as I touched on earlier, I think it’s vital we are secure in those areas of the pitch.

Making a subtle change to a 4-3-3 will undoubtedly help with that. It would mean one of either Luis Suarez or Daniel Sturridge having to do an unselfish job in a wide-forward position, and rightly so. Why compromise overall team shape to cram individuals into central attacking roles? The personnel swap I’d make is Raheem Sterling in for Philippe Coutinho, on the right against an ageing Patrice Evra, not in the number 10 role he was introduced in two weeks ago.

The three-man midfield base of Steven Gerrard behind Jordan Henderson and Joe Allen should, and I think will, be retained.

Manchester United, despite sitting 11 points behind Liverpool, are in the midst of a decent run of form in the Premier League. They haven’t conceded a goal in each of their last three domestic games, including a trip to the Emirates Stadium, and have scored five goals in the process.

Last weekend’s 3-0 win at West Brom was particularly impressive, on a ground that most of the big clubs have failed to take maximum points from this campaign. Marouane Fellaini showed signs of finally finding his feet at United in that game at the Hawthorns.

David Moyes, like Brendan Rodgers, has no real injury worries ahead of Sunday’s tie. Johnny Evans looks set to be their only absentee. Rafael is a slight doubt but I’d expect him to start.

It’s a tough one to call, isn’t it? United have had a poor season but an attacking trio of Juan Mata, Wayne Rooney and Robin Van Persie, fed by the intelligent Michael Carrick, leaves no room for complacency on our part. They are vulnerable at home though, in front of an anxious, expectant and demanding crowd.

Can we banish our recent record at Old Trafford? I’ve got a feeling we will.