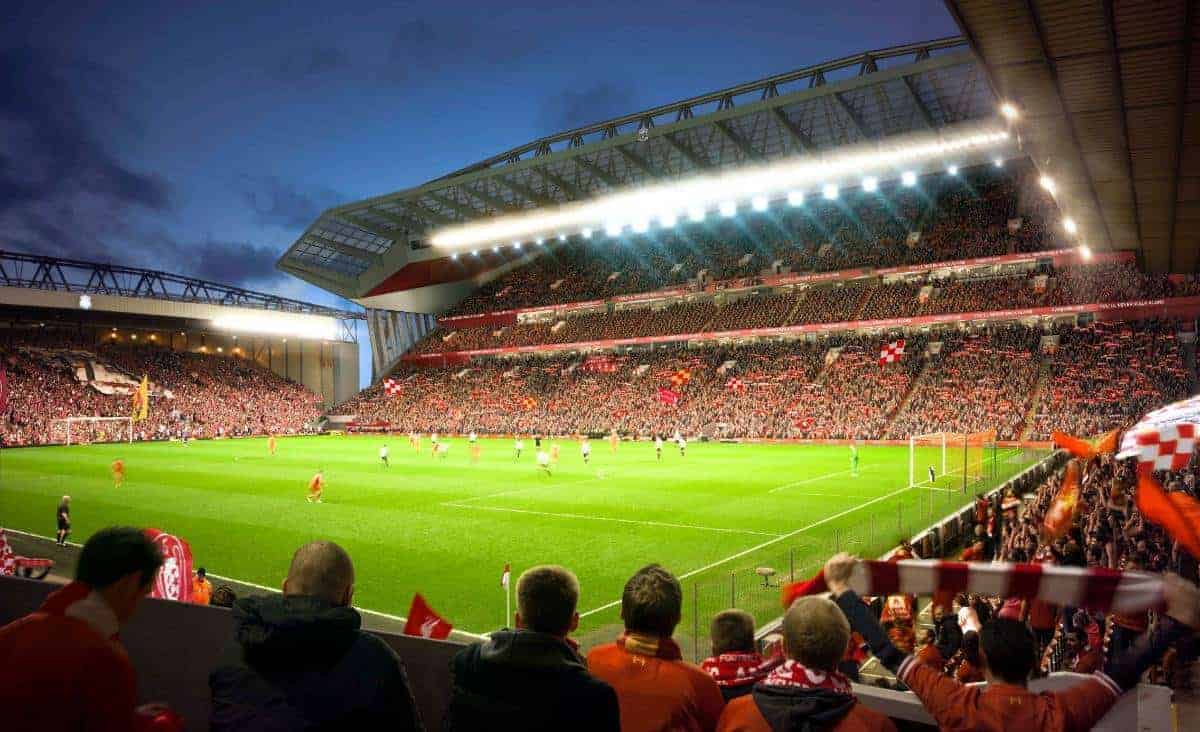 Following the release of the plans for expansion at Anfield, which will eventually see the stadium’s capacity increase to just below 60,000, Liverpool FC held a public exhibition on Thursday. We went along to get more information and ask some of the key questions that have arisen since the plans were released on Wednesday night.

As well as further information being available on the developments of the stadium and surrounding areas, key members of staff from Liverpool FC and the architects were on hand to answer questions from the public and local residents.

Below are the questions we asked and the responses we received – please note, the answers are not direct quotes but merely an overview of what was provided to us.

Will Anfield Road (the road itself) be closed off – and if so, when?

Yes. This is planned to happen during phase two (the redevelopment of the Anfield Road End) but may happen earlier. It will stop between Alroy Road (which will become a one-way street in the opposite direction to currently) and Skerries Road, as shown on the image below:

Where will the Shankly Gates and Paisley Gates be located within the new open design?

The new design for Anfield and the surrounding area will see the removal of the boundary walls and fencing around the stadium, particularly outside The Kop and the new fan park area on the Main Stand / Kop corner. The gates are provisionally marked for being moved to the Anfield Road / Centenary Stand corner where they would be located beside each other. What are the capacities of the individual tiers of the new Main Stand? What proportion of those seats will be general admission and how many will be given to new season ticket holders?

The whole of the upper tier will be general admission and parts of the bottom tier. The majority of those seats will be given to season ticket holders.

All the seats in the expanded Anfield Road Stand will be general admission.

Will current season ticket holders be able to keep their (roughly) current seat?

This is not something that has been planned or discussed as yet.

How many further disabled spaces will be generated?

Where will the tunnel be located?

Will new floodlights be installed and thus improved?

Yes. Premier League regulations mean that all stadiums now have new requirements to meet but Liverpool will delay theirs being upgraded until the Main Stand is complete (stadium wide).

Will the away fans remain in the same place after phase two?

No, they will switch to the opposite corner of the Anfield Road End, closer to the entrances for away supporters coaches on Arkles Lane.

Why aren’t the corners of the ground being ‘filled in’?

The stanchions that support The Kop stand (see image below) make this extremely difficult and would obviously require extensive remodelling of The Kop too (presumably at great cost for little gain). These supports make the stands cantilever – therefore no pillars internally – and a similar one will be housed in each corner to support the new Main Stand.

Will the TV camera position change?

No. The main TV position will be in almost the exact same place as currently (the roof of current Main Stand will be the same height as the middle tier of new stand where camera will be located).

Will operations within Anfield (media areas etc) be disrupted during development?

No. The aim is to ensure no disruption during development.

Close up of the fan park area immediately outside the new Main Stand:

Overview of the transport plans for the surrounding area:

Further information on the stadium plans can be found at liverpoolfc.com/stadium