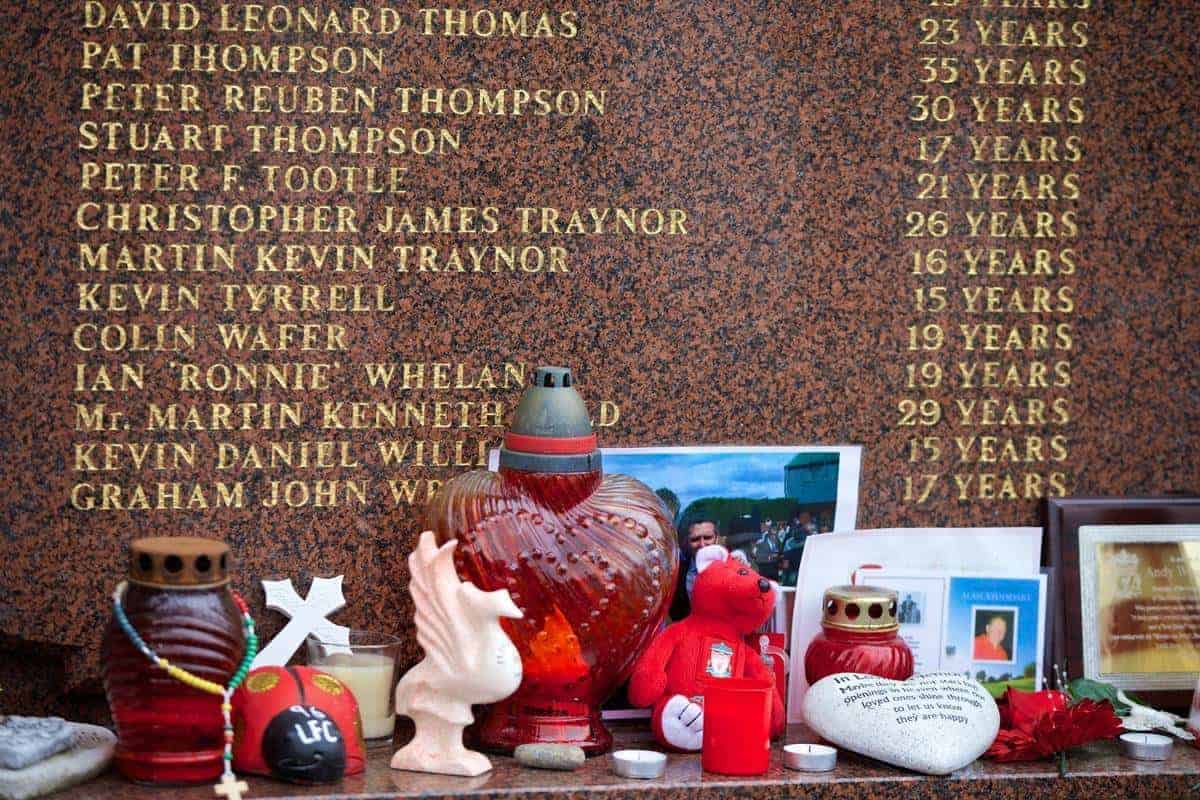 Aaron Cutler was six weeks old on April 15 1989. Here he explains what Hillsborough means to the younger generation.

I was six weeks old when the Hillsborough disaster changed the face of English football. Too young to walk or talk it would be some time before I would acknowledge its existence, never mind its significance.

That all changed aged seven. Suddenly football was my life, to the point where support teetered on obsession. I immersed myself in all things Liverpool, revising our history to the point where I could not only quote Shankly’s one liners but name his first title winning side one to eleven. The spectre of Hillsborough always loomed large but remained unclear.

A bright-eyed schoolboy was only ever likely to understand the most basic, if heartbreaking facts. 96 supporters travelled to Sheffield for an FA Cup Semi-Final. They never returned.

My adolescent ignorance was one that swept the country for 23 years. Indeed, too many turned a blind eye to the justice campaign until the findings of the HIP were released in September 2012. Only then did the nation accept what we have known for years. Only then was rightful empathy afforded the families and their struggle.

It took others far quicker to comprehend the devastation of Hillsborough and the betrayal that proceeded it. That fanatical kid was one of them. By my teens I was delving deep into the tragedy, unearthing what David Cameron would later call ‘a double injustice’ as this country betrayed Liverpool’s victims and survivors.

I researched the disaster and read streams of witness accounts, each one more harrowing than the last. I kept abreast of the campaign and its movements, all whilst wearing my red Ninety Six wristband with pride. Things were not as they seemed. Questions aplenty. Questions overriding mere club loyalty.

I also came to appreciate the herculean efforts of Kenny Dalglish. Liverpool’s manager led his city through a haunting aftermath, to the eventual detriment of his own health. King Kenny was my dad’s favourite player, a genius with the ball at his feet. His qualities as a man though set him apart. A hero in every sense of the word.

Dalglish’s own book is laced with emotion as he recounts the events of that day, as too are those of Ian Rush, Alan Hansen, John Barnes – superstars scarred by a hell unfolding before their very eyes. Steve Nicol cannot bring himself to discuss the carnage to this day. Their pain and misplaced guilt are often forgotten in this a heartbreaking story.

Whenever I visit Anfield I make a point of walking past the marble shrine and find myself scanning the crowd, wondering if that pocket there numbers 96. I turn to my family and friends and for a fleeting moment think What if? I shudder.

Nobody should ever ‘go the game’ and lose their life. Perhaps the only positive to stem from April 15 1989 is the subsequent introduction of seated stadia. Every possible measure need taking to ensure safety prevails. Campaigns to reverse that decision are quite frankly bewildering.

25 years is a long time, a lifetime in my case. Imagine fighting to be heard for more than two decades. Imagine knocking on every door and perusing every possible avenue in your bid for truth only to have it slammed in your face. Imagine having your name tarnished along the way. Imagine.

Those grief-stricken families have endured that hurt and aged in the process, as if the loss of a loved one wasn’t earth shattering in itself.

A host of people should hang their heads in shame for the role they played both on that day and thereafter. Nearing the top of such a list is Kelvin McKenzie and The Sun newspaper. I have absolutely no doubt that much of the confusion engulfing Hillsborough stems from those heinous headlines reported in a tabloid now boycotted on Merseyside.

Disgusting, vulgar lies used to besmirch those mourning their dead. Retractions have since been made but mud sticks and the stigma remains. It also extends to terraces where vile chanting about the disaster tarnishes our beautiful game and exceeds what can be deemed healthy rivalry.

I have experienced similar ignorance myself. I became involved in a heated discussion with a lecturer at university no less. Hillsborough was raised in class and suddenly dismissed as the result of drunken hooliganism. Enraged I countered my tutor’s startling take on proceedings, referencing the Taylor report of 1990 which exonerated fans of all blame. Unmoved he waved away my protestations.

A clueless fool he no doubt bought the inaccuracies fed him by The Sun. So too have thousands of others as the city of Liverpool defends its reputation. That they have been forced to do so is an outrage in itself.

That said there is no place quite like Liverpool. They take care of their own and that passion, that drive, that resilience has defined this cause for 25 years. Others would have been discouraged and silenced years ago, not Merseyside.

Think back to Everton’s moving tribute in 2012; the Hollies He Ain’t Heavy, He’s My Brother underpinning a poignant show of unity with those across Stanley Park. The Friendly Derby is a myth but that off-field bond is genuine and heart-warming. It evokes pride in both sets of supporters.

The ashen faces of Margaret Aspinal and the late Anne Williams for me provide a haunting picture to this battle -visual reminders of a painful, fraught road. Poor Anne died defending her son’s honour. How is that right?

The dignity and resolve they display(ed), along with other family members, is inspiring and a feat dwarfing the achievements of Gerrard and Suarez.

I have grown up in the shadow of Hillsborough and followed the justice campaign for over a decade. I feel a part of the struggle, as do hundreds of thousands of reds supporters worldwide. For Hillsborough transcends geographical location, in fact it transcends clubs, countries and continents. It certainly transcends football. Our fight has become a wider one. This was a human disaster after all.

The younger generation must be educated accordingly. Hillsborough cannot be brushed under the carpet and erased from history, no matter how hard certain figures try. That fateful day changed the world we live in forever. Its significance cannot be lost.