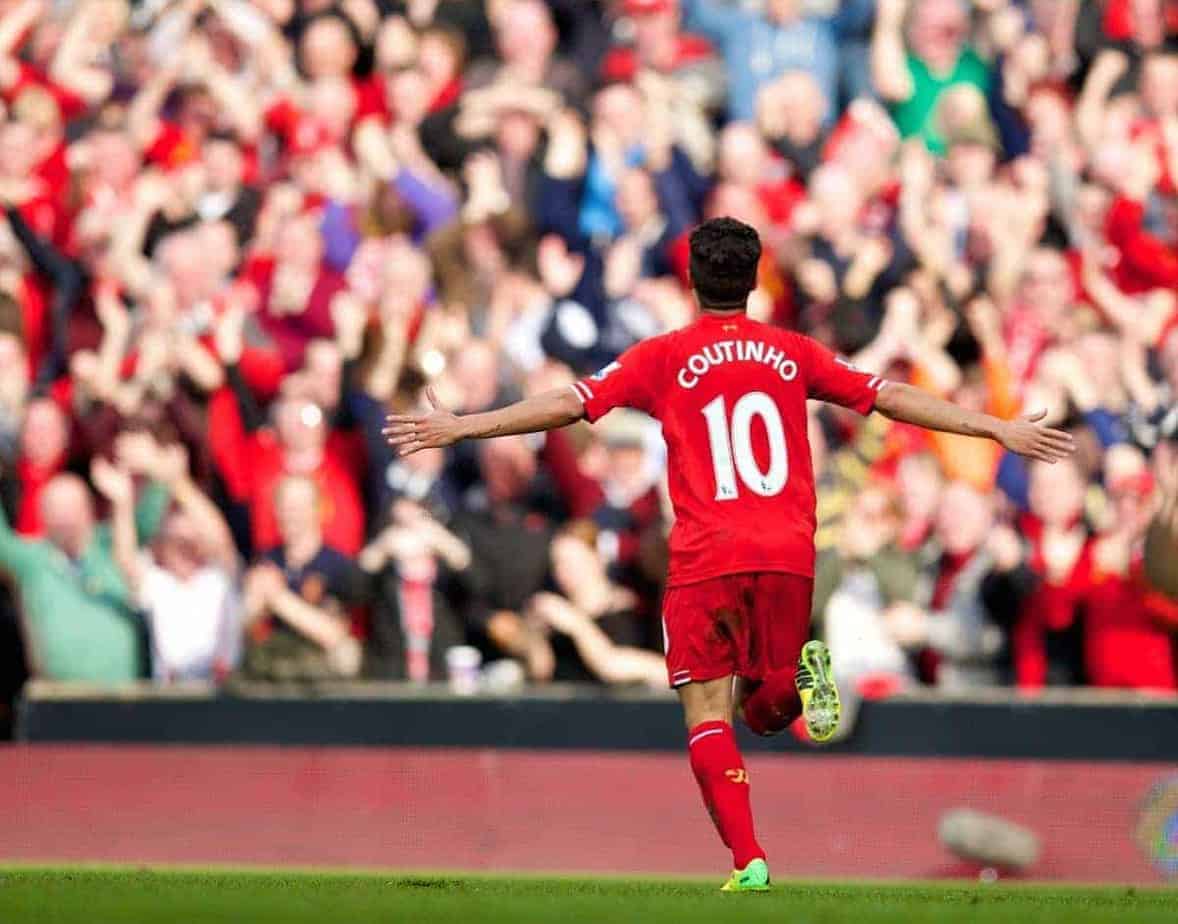 Philippe Coutinho: Back with a Vengeance

Tom McMahon comments on the resurgence in form of Philippe Coutinho that has seen him play a key part in Liverpool’s recent victories.

It’s been a somewhat turbulent season for young Philippe Coutinho.

When the young Brazilian was first introduced to the league after his £8.5 million move from Internazionale, it was no exaggeration to suggest that he took the league by storm.

Using his guile and killer through-ball’s, Coutinho individually dissected the likes of Wigan Athletic, Newcastle United and Fulham apart, chalking up 3 goals and 5 assists in just 13 appearances for the Reds

At the tender age of just 20 years old, Philippe was the poster boy of Liverpool’s transfer policy and the club’s promising future.

Fast-forward to the beginning of the 2013/14 season and expectation was heaped upon the Brazilian’s young shoulders.

Kolo Toure, in his short stint as cult hero, boasted about how Philippe was Liverpool’s best player and the young midfielder found his way into many a pundits ‘ones to watch’ list.

Fans worldwide hoped his blossoming partnership with Daniel Sturridge to pick off where it ended last season.

While Coutinho hasn’t had a poor season by any means, he has struggled to rekindle his form in the second half of the 2012/13 season.

The Brazilian simply struggled to impose himself as much in the first half of the season. Due to his style of play and impressive ball control, he always showed cute passages of play and glimpses of his supreme talent.

But that deadly consistency and end-product was missing. Poor performances like Hull away would be followed up by promising ones against Norwich at home and vice versa.

The ‘second season syndrome’ rhetoric may be a cliché amongst Premier League pundits, but the expression does contain an element of truth.

Managers and back-room teams have a sample of games to dissect his style, creating strategies to nullify his effectiveness. That initial element of surprise has gone.

Team’s adjust their lines deeper, double-up on their defensive marking and suffocate the space which he needs to thrive in.

It’s not an easy adjustment to make – the likes of Luis Suarez also struggled to have the same impact in his second season.

However, like Suarez, Philippe Coutinho may have emerged from this adjustment as a better player than ever.

Coutinho’s poor performance and subsequent hauling off at half-time against Aston Villa at home could almost be seen a watershed moment for the Brazilian.

Since then, the Coutinho of old has once again shrugged off markers with panache and created a host of chances for the clubs ravenous strikers.

More impressively, the Brazilian has showed that he – to paraphrase Rodgers – has added steel as well as style to his game.

In Liverpool’s 5-1 demolition of Arsenal, Coutinho regularly robbed the ball from Arsenal’s midfield, often acting as the catalyst to the great forward play of the resulting counter attack.

When Philippe intercepted the ball against Arsenal, took the ball past the majority of their midfield then slipped in a sublime 30-yard through ball to Henderson you just knew that the Brazilian Wizard was back in his pomp.

Since then, Coutinho has had to oust the likes of the in-form Raheem Sterling to gain a place into Liverpool’s talented attacking third.

Rodgers has recently utilised the Brazilian either at the ‘tip’ of the midfield diamond or slightly deeper as an offensive midfielder in a three-man midfield as opposed to deploying the playmaker on the left side of midfield.

This tactical switch has also improved Coutinho’s form, although without the aforementioned aggression which has supplemented his play, this may not have been possible earlier in the season and therefore its plausible to suggest that Rodgers has worked on his aggression in training.

And, judging from his back-to-back performances against Sunderland and Tottenham at Anfield, it looks like Philippe is hitting his best form for Liverpool at the climatic twilight of the season.

Against Sunderland, Coutinho graduated from an effective starter with occasional moments of magic to one of Liverpool’s star players – earning plaudits and comparisons to Manchester City‘s David Silva.

A season-long metaphor of Coutinho’s season has been in his long-range shooting. Too often has the Brazilian burst past a midfielder, only to show his tender age by blasting his shot into the upper echelons of The Kop.

Against Spurs however, the 20 yard shot he has been trying to connect with all season finally fell into place, expertly drilling the ball past the hapless Hugo Lloris from the outside of the box.

That’s it, we have our Brazilian back. Except this time, he’s a more complete player than ever before.

Given that Liverpool are once again competing for the title at the closure of the season, Philippe could not have chosen a better time to emerge as one of the finest attacking midfielders in the Premier League.

Better still, at just 21, he has still not reached his incredibly high potential. The best from Coutinho is yet to come, and that is a scary yet exciting thought.