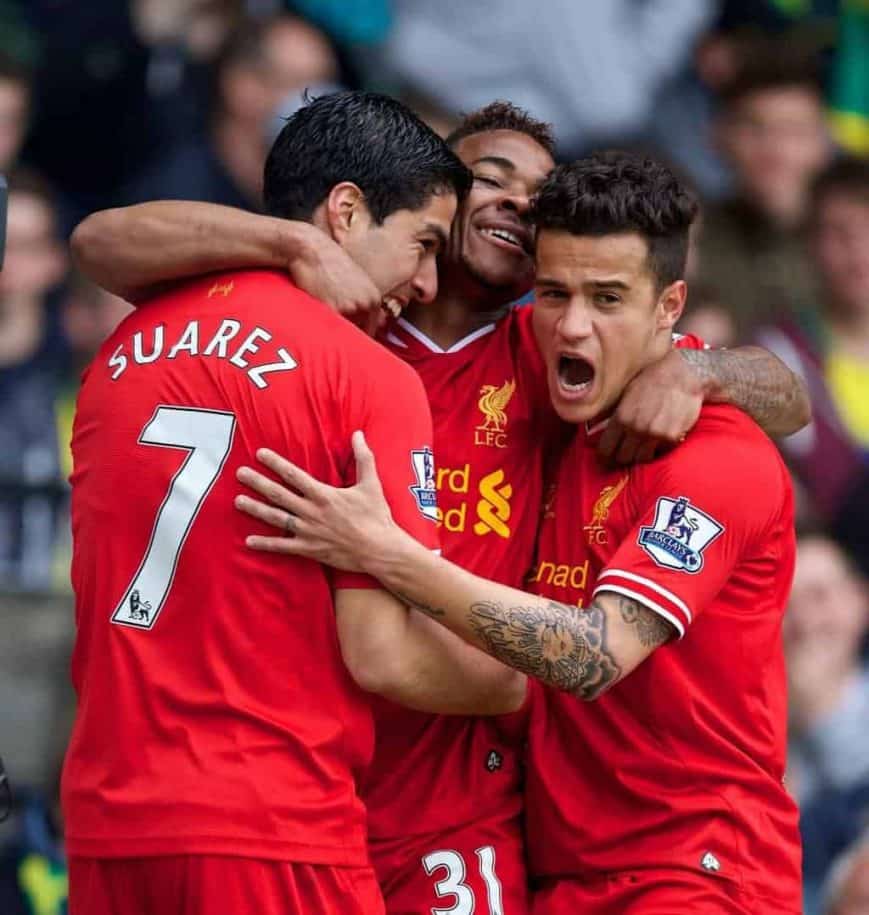 After Liverpool’s nervy affair at Carrow Road, Tom McMahon (@TomMc_Sports) argues that the team’s propensity to drop deeper could harm The Reds in their title challenge.

As a rampant Raheem Sterling picked out a perfectly weighted cross to the onrushing Luis Suarez to finish, I let out a huge sigh of relief.

All week the tension had been mounting. After an emotional roller-coaster of a win against Manchester City, it would be easy for a relegation team, battling at home, to become a banana skin for Liverpool’s ongoing title challenge. Sunderland swiftly made the dream a likely outcome by picking up points against rivals Manchester City and Chelsea away from home, resulting in my serious consideration of getting ‘Borini’ on the back of my Liverpool shirt next season.

Norwich away was a must-win. Liverpool needed to secure their place as frontrunners for the title.

So when an animated Luis Suarez embraced Raheem Sterling after making it 2-0, all the pressure evaporated. Norwich were supposed to be tenacious, aggressive and fighting for their lives, making it as difficult for Liverpool to play as possible. Instead, the team passed them to death and cut through their defence with relative ease. It was reminiscent of many great thrashings seen at Anfield this season.

In similar fashion to how I was tucking into my Easter egg, gluttony soon kicked in. This could be 3,4,5 surely? Norwich looked hopeless. The reds looked rampant. Suarez needs to get his token hat-trick yet; this will be easy.

Obviously, this wasn’t the case. Liverpool showed their ability to gift multiple goals to the opposition and what should have been a relatively carefree match turned into a Man City-lite heart attack.

After the opening quarter of the game, Liverpool sat deep and invited pressure. Towards the end, waves after waves of yellow shirts bombarded the box, with the fullbacks in particular strangled of possession. As Liverpool fans worldwide couldn’t take their eyes off the snail-paced clock, praying for the game to end, it seemed that the team had a similar ethos.

Liverpool just didn’t seem willing to pushing out their defensive line for long-periods. ‘Protect what we have for dear life’ looked like the priority as opposed to the possessive dominance of the game that we saw in the first 20-25 minutes.

First, it’s worth remembering the tactical principles of why and when teams should sit defensively deep.

Dropping the players back towards their goalkeeper denies the space in front of goal for the opposition to pass into and therefore makes the team more difficult to ‘break down’. It reduces the quality of chances the opposition get too, often resulting in the opposition attempting hopeful pot-shots from distance. The team are then poised to hit on the counter after the opposition lose their patience and either shoot or misplace a pass – which combined with a pacey attack – can lead to effective and penetrative attacking play.

Like all defensive philosophies however, there are downsides. Dropping deep can expose spaces between the midfield and defensive lines, making it easier for the opposition to dominate possession and possibly control of the game. Dropping deep will also invite the opposition to lump crosses into the box, as there isn’t much space for them to pick out a team-mate. If the opposition are strong in the air, or the centrebacks aren’t great aerially, then this could be an issue.

And that’s pretty much what happened on Sunday.

Sterling’s second goal was the definition of a counter attack from deep. The pacey winger intercepted a wayward pass from Bradley Johnson and exploded through Norwich’s defensive lines with ease – before a fortunate deflection made it 3-1 to The Reds. If the team did not drop deep and invite Norwich players to commit to the attack, then Sterling would not simply have had the space to dribble into.

(The team allow Norwich possession of the ball, before Raheem Sterling intercepts the pass, leaving him and Suarez 2 on 2 with the Norwich defence)

Similarly, Norwich’s second goal would not have happened if the defence pushed our further. Let’s be honest, the likes of Roberto Soldado, Fraizer Campbell and even Wayne Rooney don’t usually cause Liverpool centrebacks too many problems. It’s the bullying, aggressive types; Kenwyne Jones, Victor Anichebe and Romelu Lukaku seem to repeatedly boost their goal tally when facing up against Liverpool.

So when the team sat deep and invited the cross from Martin Olsson, the alarm bells should be ringing. Skrtel, Flanagan and Sakho are strong, front-footed defenders, but Robert Huth, Branislav Ivanovic and Ryan Shawcross they are not. Even Robert Snodgrass – not renowned for his strong physical presence – managed to beat Flanagan in the air at ease to execute a powerful and accurate header.

(The team drops too deep and allows Olsson to pick our Robert Snodgrass, who makes it 3-2)

So if Liverpool’s defence isn’t suited to dealing with crosses – as you would often find with a Sam Allardyce, Tony Pulis and even a Jose Mourinho team – then why would Rodgers instruct this? It’s even more puzzling when the likes of Gary Hooper and Ricky Van Wolfswinkel do not possess much pace to unlock a high-line.

Well, maybe the players, like fans, are succumbing to pressure.

It takes a great leap of faith to play a high-line. You have to execute it perfectly or it completely unravels (see Liverpool’s 5-0 rout over Andre Villas-Boas’s Tottenham Hotspur). The players are desperate to win the title, and therefore want to protect what they have, dropping deeper and deeper and actually causing the team to defensively weaken in the process. Had the team carried on dominating possession and pushed higher then I think Liverpool would have gone on to win the game by a landslide. The team are their own worst enemy.

A tactical oversight by Rodgers? A sign of the pressure from the players? A giant in-dressing room joke to try and give fans a roller-coaster of emotions at the climax of the season? Only Rodgers and the squad could answer that, but dropping deep does not seem to suit the squads defensive make-up and could cost Liverpool points over the next three games. Hopefully the team work on pushing the defensive line further forward in Liverpool’s remaining fixtures.