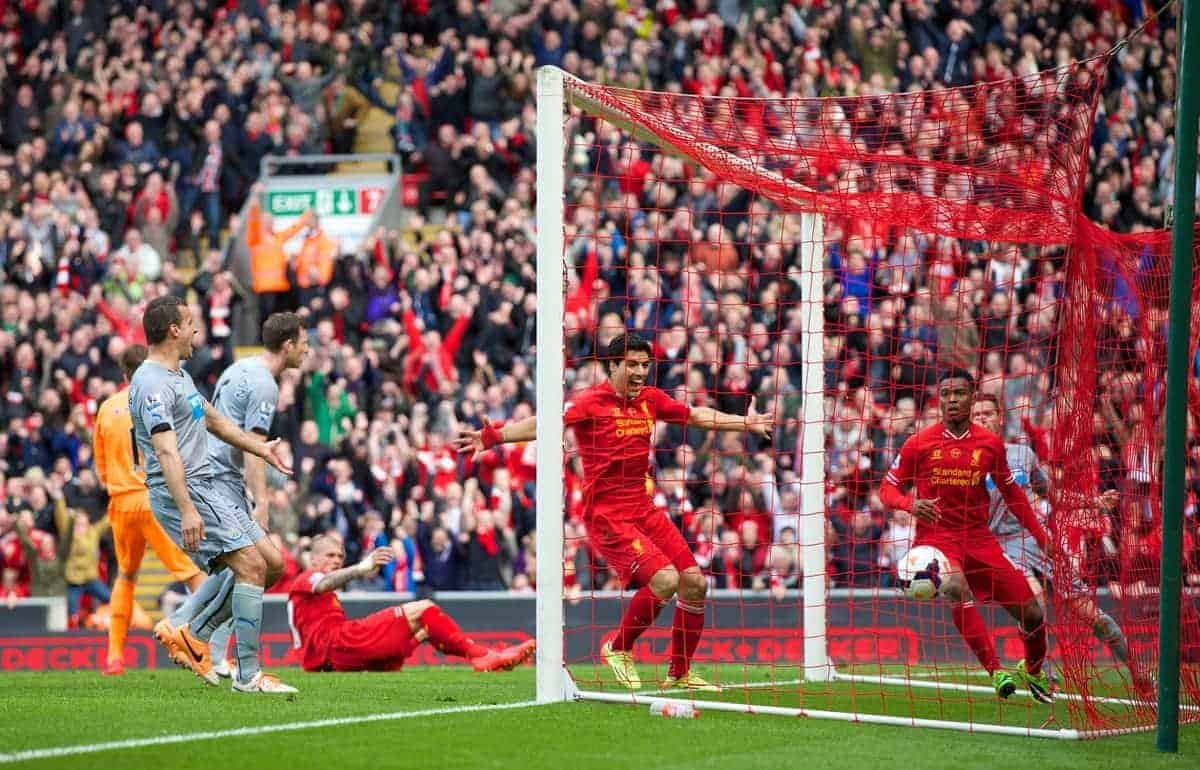 The Reds’ title dreams were officially ended on an anti-climactic final day in the 2013/14 Premier League season, but they produced a second-half fightback to beat Newcastle 2-1, having trailed at half-time. Brendan Rodgers recalled both Jordan Henderson and Daniel Agger to his starting XI, with Lucas Leiva and Mamadou Sakho both paying the price for poor performances against Crystal Palace earlier in the week. Joe Allen kept his place in the side ahead of Philippe Coutinho.

An electric Anfield roared the Reds on from the start, and after a quiet opening Raheem Sterling almost broke the deadlock after a typically flowing Liverpool move. There were question marks over whether the 19-year-old was fouled, but it would have been soft.

In the 18th minute, Luis Suarez outrageously took a free-kick early from out wide, looping the ball over Tim Krul into the net. Unfortunately, referee Phil Dowd had not yet allowed the set-piece to be taken.

Two minutes later disaster struck. Martin Skrtel diverted a cross into his own net past Simon Mignolet, giving the Reds even more of an uphill battle in the title race than at the start of the game.

With Liverpool struggling to get a grip on proceedings, Mignolet was forced to make a fine save to thwart Yoan Gouffran when clean through. Suarez, looking lively, produced a terrific jinking run soon after, but his tame effort was saved by Krul.

News of Manchester City taking the lead didn’t help the mood, and Daniel Sturridge‘s uncharacteristic missed header seemed to sum up the belief lacking in Rodgers and his side all afternoon.

It signalled the last action of note at the end of a frustrating opening 45 minutes.

City’s second goal straight after the break meant the title race was effectively over, and it seemed very tough for Liverpool’s players to pick themselves up and produce the brilliant attacking football they have so often this season.

Steven Gerrard’s free-kick from out wide just evaded Skrtel and Suarez, while the Urguayan’s own free-kick was easily saved by Krul.

After 62 minutes, Daniel Agger, playing possibly his last ever game for Liverpool, turned in Gerrard’s delivery in front of the Kop, as the Reds drew level. A minute later Sturridge scored almost a carbon copy of Agger’s strike; his 24th goal of the season in all competitions. Shola Ameobi was also sent-off for dissent in the aftermath of the goal.

The final 20 minutes petered out, barring Paul Dummett’s rather unfortunate dismissal for Newcastle, as the Reds picked up all three points and ended their season on a high. The victory sealed second place in the final Premier League standings.

It has been an absolutely wonderful season for Liverpool- their finest since the Premier League‘s inception in 1992- and Rodgers and his players should feel very proud of their efforts.

The 11-game winning streak gave them a real chance, and although they faltered at the final hurdle, this is a scenario that was unthinkable back in August.

Here’s to Champions League football against next season.

Man of the Match: Luis Suarez

Raheem Sterling was again used in a central role, as Rodgers went with the 4-4-2 diamond formation used so much of late. The 19-year-old was quiet however, with Newcastle stifling his threat.

Henderson brought more dynamism to the side in place of Lucas, but wasn’t at his best.