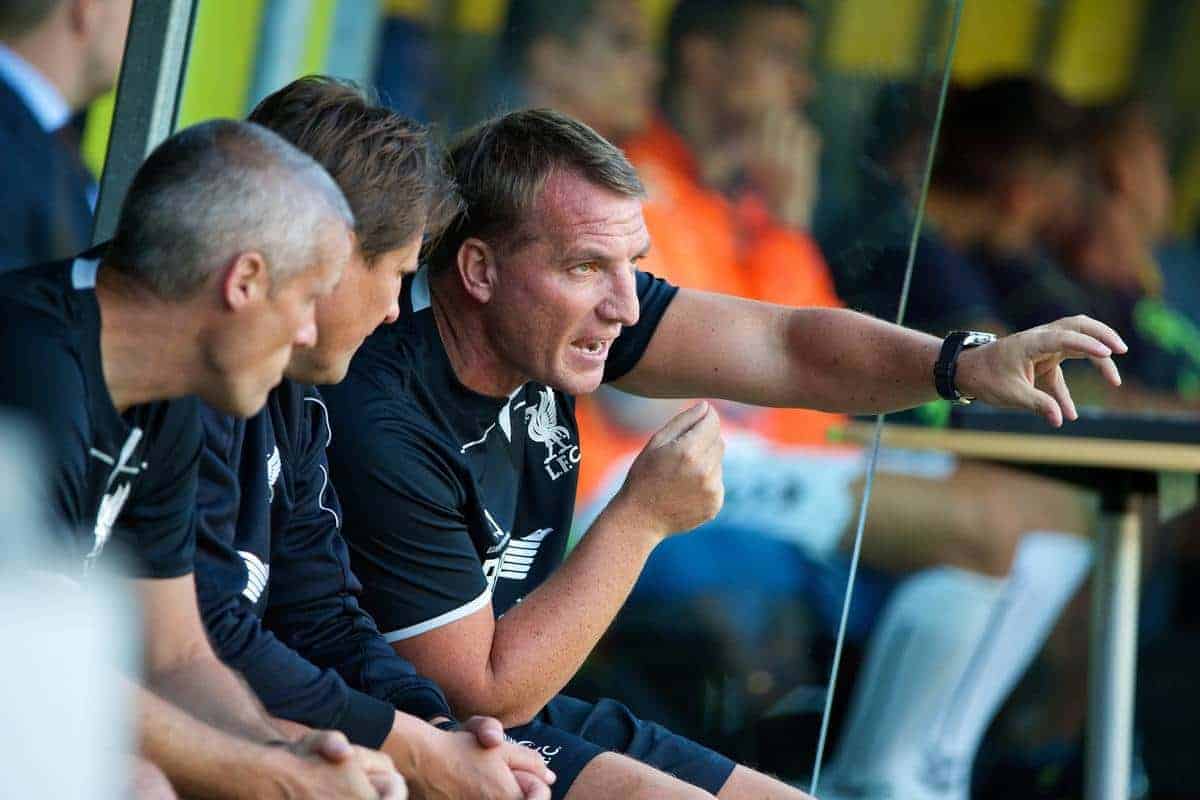 Pre-season is generally a period in which to gain match fitness, to impress the manager or, in some cases, put yourself in the shop window as transfer business continues.

Liverpool’s first warm-up friendly saw a mix of youth, experience, the hopefuls and the hopeless, as the Reds lost 2-1 to Danish side Brondby in Copenhagen.

Against Preston North End on Saturday, this trend will likely continue—hopefully with a more positive result against a lesser opposition.

Three players stand out as ones to watch, for various reasons, in this encounter, and will likely stand at the forefront of Rodgers’ mind on the same grounds.

PHOTO: @Jesanchez3 works hard on his fitness, with a familiar #LFC face in the background… pic.twitter.com/6iBe1YnJWI

After having spent the majority of last season on the sidelines, the future of Jose Enrique under Rodgers is somewhat of a contentious subject.

Many feel that the Spaniard is more of a liability than a talent, and the club’s pursuit of left-back targets such as Sevilla’s Alberto Moreno and Swansea City’s Ben Davies go to some length to prove that the Reds’ manager may be of that contingent.

The Ulsterman has previously questioned Enrique’s “hunger and desire”, whilst expressing a frustration at the defender’s recovery time throughout last season will not have helped the situation.

Left out against Brondby, the 28-year-old revealed that he will feature in this next friendly, and by all accounts is seemingly set on fighting for a place in the Liverpool squad.

For everyone that just ask me today I'm perfect and fit to play but we are going slowly. I will play some minutes on Saturday.

On his day, the former Newcastle United man represents a hugely physical presence at left-back, with a propensity to drive forward and join the attacking sector—qualities which lend to the modern full-back role—however, these are often marred by lapses in judgment.

This warm-up game should ease Enrique back into proceedings, and a committed performance, full of the required hunger and desire, will be what the doctor ordered—after a season-long wait for Rodgers—against Preston.

New Reds signing Emre Can unfortunately missed the Brondby opener due to injury, but is set to feature against Preston.

As one of Rodgers’ summer reinforcements, Can will be an intriguing prospect in this debut performance.

The former Bayer Leverkusen man has lofty ambitions with Liverpool this season, aiming for a Premier League title in his maiden campaign, and the 20-year-old will be looking to set a marker on Saturday.

Whilst a youthful option, Rodgers has clearly outlined a first-team berth for Can this season.

The Ulsterman opined on the midfielder’s signing that “He has recognised that we are a club that improves and nurtures exciting, ambitious players and I’m looking forward to seeing him take those next steps forward for us.”

It is still early days, but an impressive performance against Preston will do wonders for Can and the 20-year-old will be looking to prove just what he can do in a Liverpool shirt this season.

Ibe: "The manager has told me to get more goals – so hopefully I can do well in pre-season." http://t.co/Yi1fm2Ecy0 pic.twitter.com/k1RHNIsYHk

After a productive loan spell at Birmingham City at the end of last season, the former Wycombe Wanderers man has returned to the club and looks set to follow Raheem Sterling into the first-team fold in due course.

The youngster has clearly earmarked this pre-season as a key opportunity to stake his claim for a regular role for the Reds in 2014/15, and has so far worked admirably to that end.

A starring role in the side’s 4-0 post-season friendly victory over Shamrock Rovers was followed by another remarkable turn in Wednesday’s defeat to Brondby.

Joe Rimmer, writing for the Liverpool Echo, believes “Ibe is lucky in that he comes in to a Liverpool team which embraces youth and flair.”

The winger possesses both in abundance and, if Ibe can show an improvement in his end product in fixtures such as this, should catch Rodgers’ eye this pre-season.

Who will be your ones to watch?

Enrique, Can and Ibe will all be ones to watch against Preston on Saturday.

Elsewhere, new signing Rickie Lambert could look to impress in the centre-forward role, whilst midfielders Suso and Joao Carlos Teixeira will hope to improve on their mediocre performances against Brondby.

Meanwhile, perhaps fellow youngsters such as Adam Phillips could follow Ibe and force their way into the first-team reckoning this pre-season.

Whichever way this next warm-up encounter pans out, these performances will be growingly vital.

Which players are you most looking forward to seeing against Preston on Saturday? Let us know in the comments below.