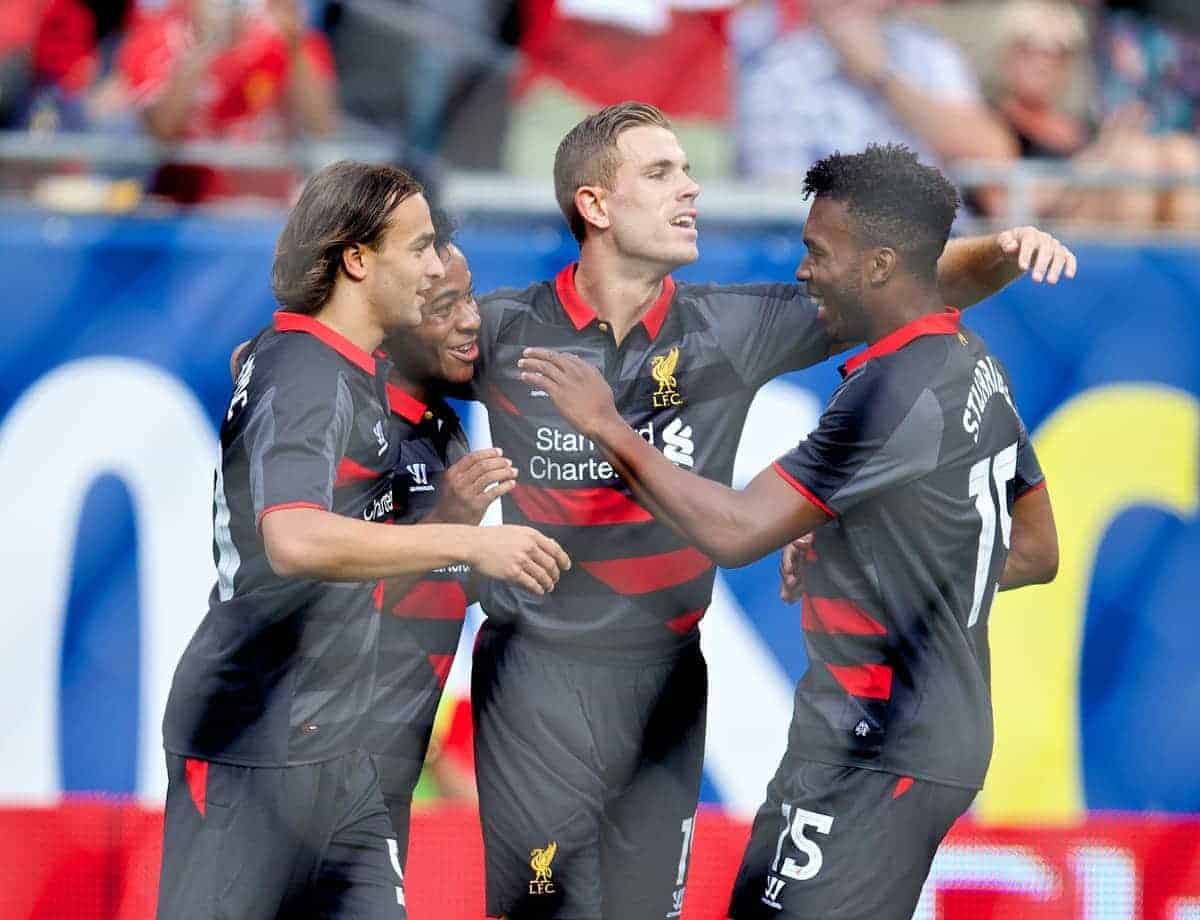 Liverpool recorded the first victory of their US tour on Sunday night, with Raheem Sterling’s early strike the only goal in a tight game with Olympiacos. Henry Jackson rates each Reds player on the night.

The Australian was relatively untroubled all evening, but was solid when called upon. Made a good late stop to preserve his clean sheet.

Johnson currently looks the Reds’ biggest liability, with right-back an area of the pitch Brendan Rodgers simply must add to this summer.

The 29-year-old was sloppy in possession, weak defensively and generally not switched on whatsoever.

The signing of Dejan lovren has led to some questioning Skrtel’s place in the starting XI next season, but the Slovakian responded with a very fine display.

He thwarted a number of promising Olympiacos attacks, and was Liverpool’s standout defender throughout.

The Ivorian quietly went about his business, and was solid alongside the more noticeable Skrtel.

It seems unlikely that the 33-year-old has much of a future at Anfield, however, with Skrtel, Lovren, Mamadou Sakho and, if he stays, Daniel Agger ahead of him in the pecking order.

The Spaniard produced a decent 45 minutes before being replaced at half-time, and he appears to be making good progress in his recovery from long-term injury.

Liverpool still need to strengthen at left-back, but Enrique can be an able deputy.

A quiet display from the skipper, who eased himself back into action following his post-World Cup break.

The 34-year-old played with his usual calm and authority in the deep-lying midfield role, and played a part in the lead-up to Raheem Sterling’s goal.

Henderson was one of Liverpool’s standout players on the night, showing endless running and quality on the ball. He was one of only three players to last the whole 90 minutes.

The 24-year-old continues to improve, and is likely to be a pivotal player next season as the Reds launch an assault on both the Premier League and Champions League.

The German wasn’t quite as noticeable as he has been in other pre-season games this summer, but there was still further evidence to suggest Liverpool have signed a top class midfielder.

The 20-year-old’s box-to-box style was impressive, and his defensive expertise should make the Reds far tougher to break down compared to last season.

Sterling produced a match-winning performance in his first game back, scoring the only goal of the game with a good finish, and looking a constant menace every time he got the ball.

The 19-year-old is now a key player at Anfield, and has the world at his feet.

Markovic showed glimpses of his vast potential on his Liverpool debut, before being replaced at the interval.

The 20-year-old former Benfica man showed good pace, dangerous dribbling and an impressive work ethic. He may take a little time to settle in England, but the Reds have a real gem on their hands.

Much is expected of Sturridge following the exit of Luis Suarez, and he looked very sharp.

The 24-year-old assisted Sterling’s goal, albeit fortunately, and his movement, speed and underrated creativity looked very good throughout.

The youngster was fairly unnoticed, but he got forward well and looked reliable defensively.

The 24-year-old didn’t really stamp his authority on proceedings, and was uncharacteristically sloppy in possession at times.

Needs to do more if he is to become a regular.

PHILIPPE COUTINHO (on for Markovic 46)- 7

The 22-year-old Brazilian has been Liverpool’s best player in pre-season, and his ability to beat a man and superb vision were on display once again in Chicago.

Like Robinson, Kelly was solid but unspectacular. He did better than Johnson, however.

Coates has looked impressive this summer, and he produced an assured cameo against the Greek side.

A very poor showing from the Brazilian, who looked completely out of sorts.

He was painfully slow both on and off the ball, and his ball retention was simply not good enough. Injuries have cruelly affected the likeable 27-year-old, and he is now a weak-link in the squad.

The exciting youngster didn’t have enough time on the pitch to impose himself, but he did produce a good late run that nearly saw Allen add a second for the Reds.

No time to really make an impression.

Who was your star man against Olympiacos? Where do you agree and disagree with the ratings? Let us know in the comments section below.