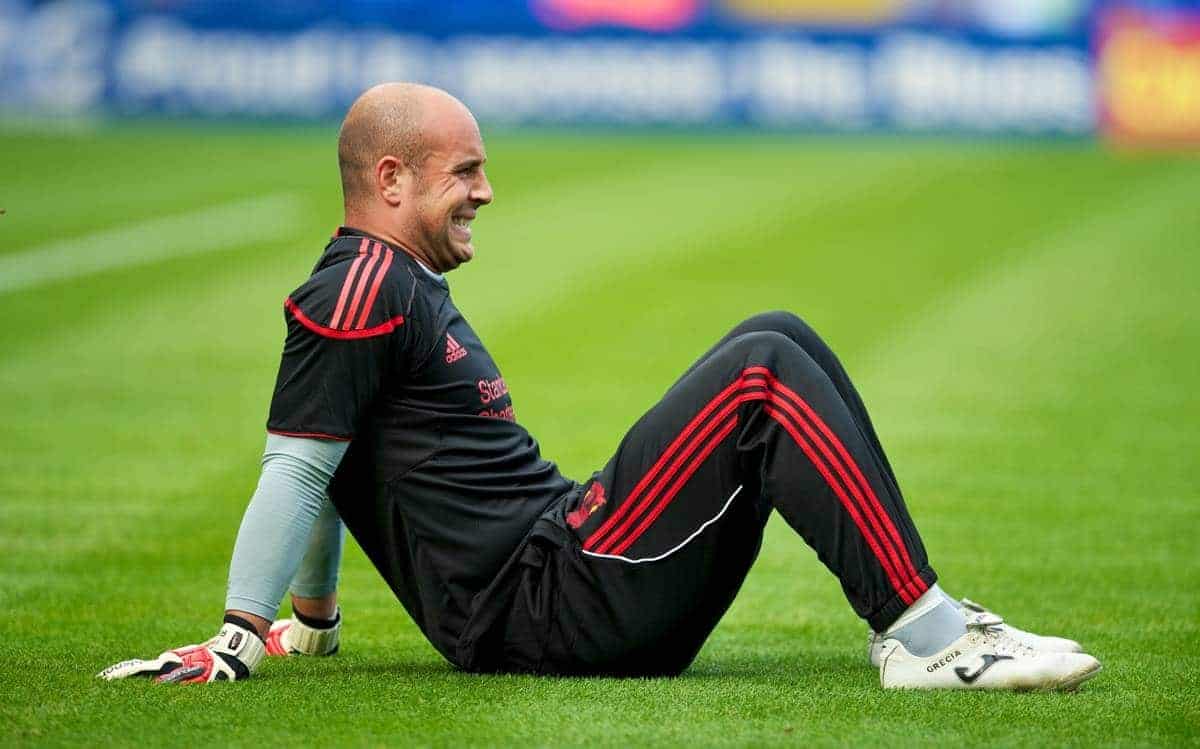 As Pepe Reina departs Anfield after nine years at the club, Ben Twelves takes a look back at some of the best memories the Spaniard is leaving behind.

Pepe Reina’s days as a Liverpool player have come to a sad but expected end, with the former fans’ favourite sealing a moving to German champions Bayern Munich.

The Spaniard arrived at Anfield on the back of the miracle of Istanbul – with Rafael Benitez declaring him “the best goalkeeper in Spain” at the time – and the likeable keeper enjoyed eight seasons as the clubs’ number one.

In his time on Merseyside, Reina made 395 appearances for the Reds and he undoubtedly gave Liverpool fans everywhere some unforgettable memories. Here are 5 of the most memorable Pepe Reina moments.

It was the then 22-year-olds first season on Merseyside and what a way to top it off. As if the greatest cup final in living memory couldn’t get any more dramatic, Reina performed heroics in the shootout against West Ham, saving three penalties from Bobby Zamora, Paul Konchesky and Anton Ferdinand to hand Liverpool the trophy at the Millennium Stadium.

Another famous European night at Anfield was added to the collection in April 2008 as Liverpool beat Arsenal 4-2 to reach the Champions League semi-finals stage. Goals from Sami Hyypia, Fernando Torres and Steven Gerrard had put Benitez’s side 3-2 ahead and in the 90th minute, a lightning paced run and finish from Ryan Babel in front of the Kop sealed the win, sparking mass celebration with Reina joining the Dutchman in the corner flag to celebrate.

The 2007 Champions League semi-final second leg proved to be another unforgettable European night at Anfield. After the tie had ended 1-1 after extra time, the match went to penalties with Reina this time keeping out two spot-kicks from Arjen Robben and Geremi to send Liverpool through to the final and once again become the name on everyone’s lips.

Things weren’t going according to plan on the pitch for Liverpool, who were desperate for a result over their arch rivals to get back on track in the race for top 4 qualification. After Fernando Torres put Liverpool ahead, United pushed for an equaliser, but a stoppage time goal from David N’gog to wrap the game up was greeted by a delirious Reina who proceeded to sprint the length of the pitch – out-running and number of teammates – to celebrate the moment with the ecstatic Frenchman.

Reina will always be remembered for being part of the teams that triumphed in the finals of both the FA and Carling Cup of 2006 and 2012 respectively. He played the decisive role in Cardiff under Benitez and enjoyed further silverware at Wembley under Kenny Dalglish where Liverpool beat Cardiff City, once again on a penalty shootout. It’s sad that in Reina’s time on Merseyside that a player of his quality didn’t win more honours.

Upon his temporary exit from the club, Reina wrote a heartfelt letter to Liverpool fans. It was a moment that showed he understood the club and what it meant to the fans. It showed he was one of us and a dying breed of footballer who enjoyed a special relationship with the supporters who loved him for his character and passion for the club.

Pepe Reina’s Goodbye #LFC letter. Loves #LFC & fans, but disappointed how he was treated by management in end. #YNWA pic.twitter.com/w8Fdr5rTCM