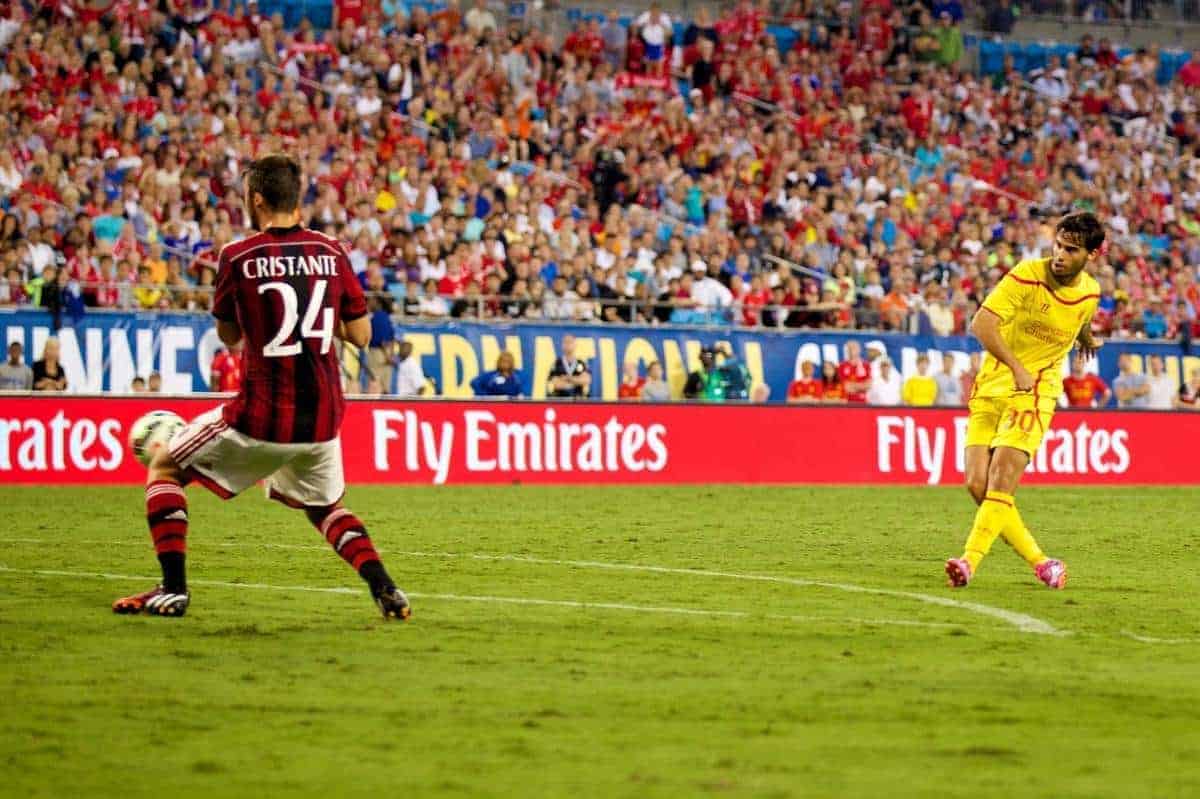 Liverpool defeated AC Milan thanks to goals from Joe Allen and Suso, as Brendan Rodgers’ side warmed up for Monday’s International Champions Cup final against Manchester United with a solid performance. Rickie Lambert did miss a penalty, however. Liverpool went into the game against the Italian giants knowing they had already qualified for Monday’s International Champions Cup final, by virtue of Manchester City‘s penalty shootout defeat to Olympiakos. They will face bitter rivals Manchester United in the showcase event in Miami.

Sturridge, Jon Flanagan and Lazar Markovic all missed out on a place in the squad through injury.

An uneventful opening 15 minutes saw Liverpool enjoy the better of possession, without really doing anything of note with it. The passing from both sides was sloppy, and the pace of the game was extremely slow.

The match sprung into life in the 17th-minute, however. A mistake in the middle of the park by former Chelsea midfielder Michael Essien saw Joe Allen race through on goal, and although his effort hit the post and Sterling couldn’t convert the rebound, the ball eventually found its way back to the Welshman and he fired the Reds in front.

Rodgers’ men grew more and more in stature from that point on, and their lead should have been doubled just before the half-hour mark. Sterling won a penalty having been fouled by Adil Rami, but from the resulting spot-kick Rickie Lambert saw his effort saved by Christian Abbiati. The 32-year-old’s search for his first Liverpool goal agonisingly continues.

Liverpool’s two young wingers both looked superb throughout the first-half, playing with a fearlessness and maturity beyond their years. Ibe, in particular, was terrific, and it was his wonderful initial run that led to Sterling winning the penalty.

It took 38 minutes for Mignolet to make a save, with M’Baye Niang’s tame effort comfortably stopped by the 26-year-old.

The half-time whistle blew with Liverpool a goal up, but their overall superiority, coupled with Lambert’s penalty miss, meant they weren’t entirely happy with that scoreline.

Rodgers introduced Conor Coady and Suso at the interval, with two of Liverpool standout players, Sterling and Jordan Henderson, given a rest ahead of the clash with United.

Filippo Inzaghi’s side improved at the start of the second-half, with reported Reds target Mario Balotelli oozing quality having come on at half-time.

The flow of the game was somewhat scuppered by eight Liverpool changes on the hour mark though, with Gerrard, Emre Can and Coutinho coming on, among numerous others.

A lack of chances and intensity saw the game in danger of drifting away with twenty minutes remaining, with Liverpool in total control.

Gerrard’s long-range effort drifted wide, while at the other end Niang and Sulley Muntari both went close, as the match improved in its final stages.

It was Suso who put the icing on the cake, curling home a terrific effort from the edge of the box in the dying minutes.

It was a good night’s work from Rodgers and his side, and they now look forward to Monday’s clash with their most bitter rivals.

Rodgers adopted his favoured 4-3-3 formation, with Sterling and Ibe out wide and Lucas anchoring the midfield in place of Gerrard.

With Sterling replaced by Suso at the break, Ibe switched to the left-hand side, with the young Spaniard drifting inside from the right.

Lambert continued to struggle, however, and lacked the pace and fluency of the injured Sturridge in the lone strikers role.