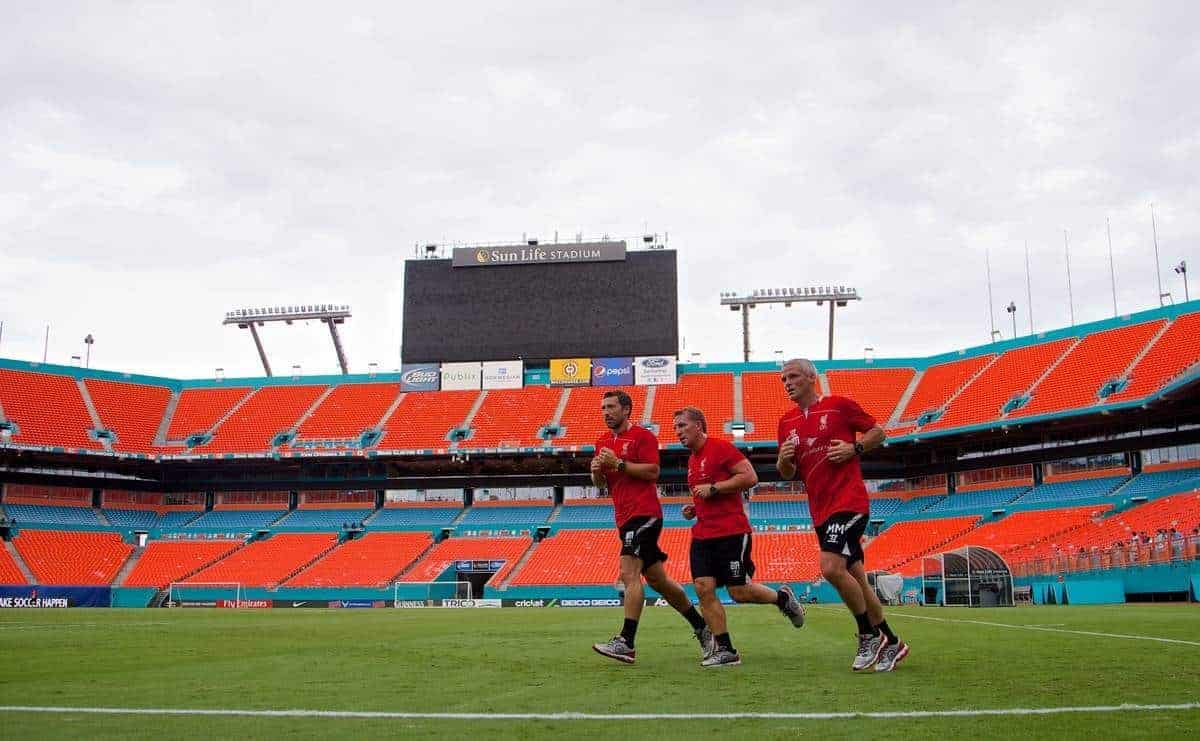 The Guinness International Champions Cup comes to a conclusion on Monday evening in Miami when Liverpool take on Manchester United in the final of the pre-season tournament.

Liverpool face a grudge match in the final of the International Champions Cup on Tuesday morning in Miami, Florida, just over 48 hours after beating AC Milan 2-0 in the final group game.

The Reds, who qualified for the trophy decider on Saturday night without even kicking a ball – due to Manchester City losing on penalties against Greek champions Olympiacos – will be looking to finish off a successful pre-season tour of the USA in style by being crowned 2014 winners of the pre-season warm-up competition.

Liverpool, who are set to receive an extra £2 million in prize money for the high-profile match, flew directly to Miami straight after the win over a poor Milan side, and recovery time will be at a premium for Reds as they prepare to take on their nearest and dearest in the crunch clash.

Liverpool have landed in Miami, where they’ll play Man United on Monday night (1am Tuesday kick off in England).

Liverpool will receive an extra £2 million for playing in the ICC final on Monday. — This Is Anfield (@thisisanfield) August 3, 2014

The deciding game will take place at the Sun Life Stadium in the iconic city, a ground which boasts an impressive 80,000 capacity and is the home of NFL side Miami Dolphins, where over 50,000 tickets are said to have already been sold for the mammoth encounter already.

The Miami stadium will provide a familiar setting for the remaining England internationals in the Liverpool squad, as it hosted Roy Hodgson’s side twice this summer in their respective World Cup warm-up matches against Ecuador and Honduras.

Boss Brendan Rodgers revealed the disappointing news after the win over Filipo Inzaghi’s men that Daniel Sturridge – along with Jon Flanagan and Adam Lallana – had flown back to the UK to receive treatment for niggling injuries, and that completely rules the England internationals out of playing in Miami.

Sturridge has flown back due to a hamstring injury but BR says he’ll be ready for Dortmund. Flanagan and Lallana have also come back.

Lazar Markovic was left out of the match-day squad against Milan for the second game running, with reports indicating before the City match that the Serbian had picked up a minor knock in training, and although no official word on the speedy wide-man’s recovery, he has since been ruled out too.

On the pitch, explosive youngster Jordon Ibe was handed his first start of the tournament against the Rossoneri and the talented winger will have hoped his impressive performance was enough to convince Rodgers to reward him with a starting berth once again in Tuesday’s final of the competition.

Probably forgotten in the aftermath of Lambert’s penalty miss, but Ibe was sensational in the build-up to it. Strong, clever, direct. — Kristian Walsh (@Kristian_Walsh) August 2, 2014

Suso also staked his claim for a starting shirt in Miami – as did Sebastian Coates with another assured display at centre back – after the creative Spaniard came on to score Liverpool’s second goal on Saturday night, and wrap the game up for Rodgers’ side.

There’s almost nothing that the two clubs don’t know about each other as they prepare to head into yet another battle on the big stage, and Liverpool will know that their arch rivals have enjoyed a promising start to life under new manager Louis van Gaal, after enduring a completely different season to what’s come to be expected at Old Trafford under the Chosen One, David Moyes, and Ryan Giggs last campaign.

A change to a 3-5-2 formation from day one, reminiscent of the shape that guided van Gaal’s Holland side to a third placed finish in the World Cup, has breathed new life into a United team who were far from even being average last season.

While only being pre-season friendlies, results and performances have picked up under the Dutchman, giving off a new found positivity alongside the obvious intrigue as to how the club will go forward after a terrible start to the post-Alex Ferguson era.

Rodgers: “Historically Liverpool v United is biggest fixture in the world. It will be a fantastic game for us.”

The up-turn in form has seen United progress through their pre-season schedule unbeaten to date, and they have also scored 13 goals in just four pre-season fixtures on their own respective tour of the USA, recording wins over LA Galaxy, Roma and Real Madrid – which was played in front of a new record crowd for a football match in the US of 109,318.

Liverpool will be hoping to become the first team to inflict defeat on a van Gaal side in the early hours of Tuesday morning and the rival clash will be shown live on Sky Sports 1.