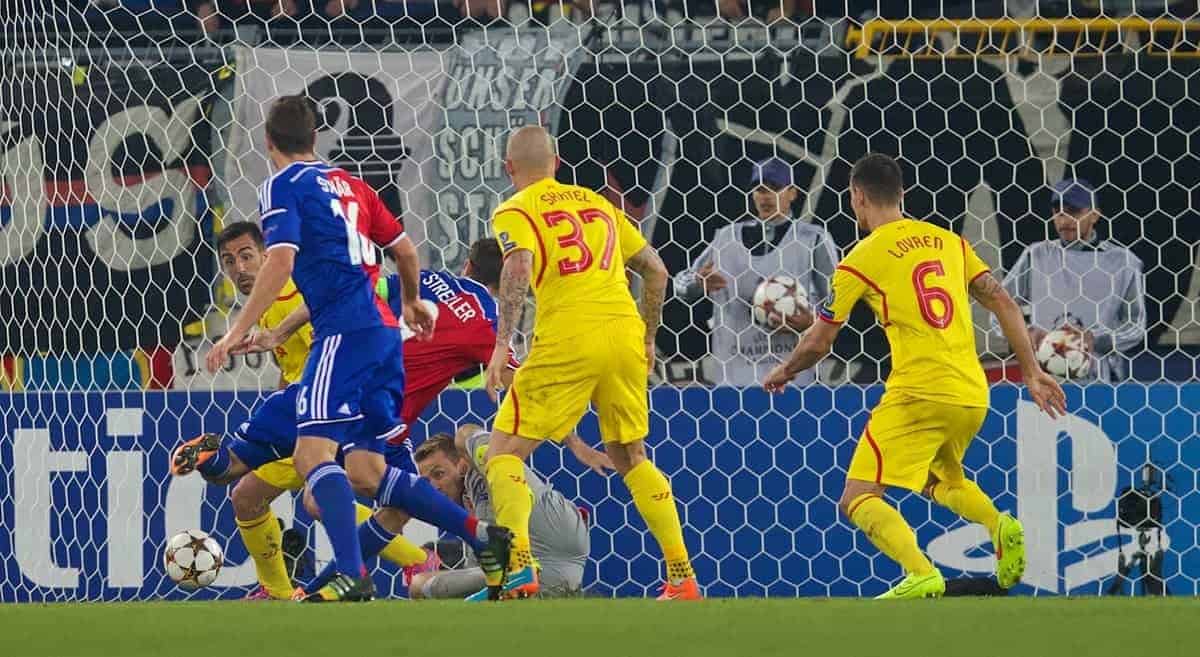 Rory Fitzgerald provides a detailed assessment of Basel’s goal against Liverpool on Wednesday, another conceded off a set piece.

With man marking, if a player scores then you know who is at fault – that’s the rationale provided by ex-pros that never played the more continental zonal system (but one which England’s technical director Howard Wilkinson has used for over 30 years).

Martin Skrtel played the man-marking system and still remained at fault despite his man not scoring the goal. So, is that a counter argument for the zonal marking proponents? According to Jamie Carragher on Sky Sports after Wednesday’s defeat, “…that’s Martin, he’ll never change”.

Football is a team game and never more so than when 7-8 players are working in a tight space to defend a set piece. So, why did Liverpool lose a game because Skrtel neutralised 50% of Basel’s aerial threat. Despite what is being said about Skrtel, Lovren & Gerrard will have a few questions to answer in the team meeting as well.

A few things with the corner:

1. Enrique being on the far post was a new development, it’s not something we normally see.

2. Basel have only 5 in the box and we have 6 in their vicinity combined with Enrique and Mignolet both on the goal line – certainly enough, no questions there at all.

3. Gerrard took his normal position just off the near post zonal marking. Henderson had a Basel player just behind Gerrard man marking.

4. Lovren and Skrtel are both marking the main threats. Notice how Lovren takes a more aggressive positions vis-a-vis his man compared to Skrtel who settles for just getting goal side.

4. At the near post, Gerrard had eyes on Henderson’s man too and decides it’s his man when he runs past him for a flick on if it’s a short delivery. Henderson realises that Gerrard has decided to leave his station and take his man. Henderson puts the brakes on from tracking him and tries to occupy Gerrard’s position – he misses the ball. Perhaps Gerrard would have too if he maintained his position. However, it seems Gerrard lost focus on his position to cover the man whilst Henderson had to react to the ‘change’ and try to cover Gerrard – far from ideal.

5. Skrtel is goalside of his man. Given that the ball is an out-swinger, he has a difficult job of winning it as Schar has the positional advantage.

6. Lovren is the opposite. When the ball clears Henderson, he decides he is not staying touch-tight with his man. The kind of touch-tight that Skrtel likes. Instead, he leaves Streller and is attracted to where the ball is likely to drop.

Personally, I prefer Lovren’s style to Skrtel. However, with the out swinging corner then Lovren’s decision is questionable. Whatever is levelled at Skrtel in that moment, his marker is certainly not getting anything clean on it.

7. At the moment when Streller scores, Skrtel is 2 yards goal side of Schar whilst Streller is 2 yards goal side of Lovren. It can be argued that Skrtel nullified Schar’s threat but did not neutralise the overall threat as the ball was still deflected towards our goal. Lovren on the other hand tried to win the ball – perhaps naively given the out swinger – and got punished given the ricochet of the ball towards our goal.

Side issue: Skrtel has carried out the stereotypical duties of a man-marker i.e. my man is not scoring. The zonal mantra is that you attack the ball when in your area. Has Skrtel done his job though by just focusing on Schar? He has nullified 50% of the biggest threats within the opposition with respect to aerial threats.

Lovren’s man scored the goal as he got attracted to the ball and wasn’t touch-tight. Was he right to attack the ball and not focus on his man despite it being an out swinging corner?
Gerrard abandoned zonal for man marking and caused confusion at the near post with Henderson, is that right? The corner could be a mini case study for zonal and man marking.

Conclusion: It appears a few things happened at that corner. Gerrard switched from zonal to covering a runner. Henderson took responsibility to cover Gerrard as the captain took Henderson’s responsibility.

Crucially, of the 6 active players in the box, 4 of them were not working in tandem. Management will be looking at the decision making of the majority of our more senior players at that set piece.

Coutinho scored at Goodison with an arcing run to the back post and scored last season. He made the same run vs City when Skrtel scored at Anfield with a near post flick. It’s an example of training ground routines manifesting itself on the pitch. There was none of this from Basel on that goal.

Their was no invention from Basel and yet the co-ordination from senior players in our team was left wanting. With Coutinho on the edge of the box and Markovic and Sterling up front – could it be that players were anxious to win the ball and start a counter attack? Whatever happened at that moment, the players were not working off a set script. Gerrard seemed to focus on a man when his task was zonal whilst Lovren was detailed to Streller but admirably/naively tried to win the ball.