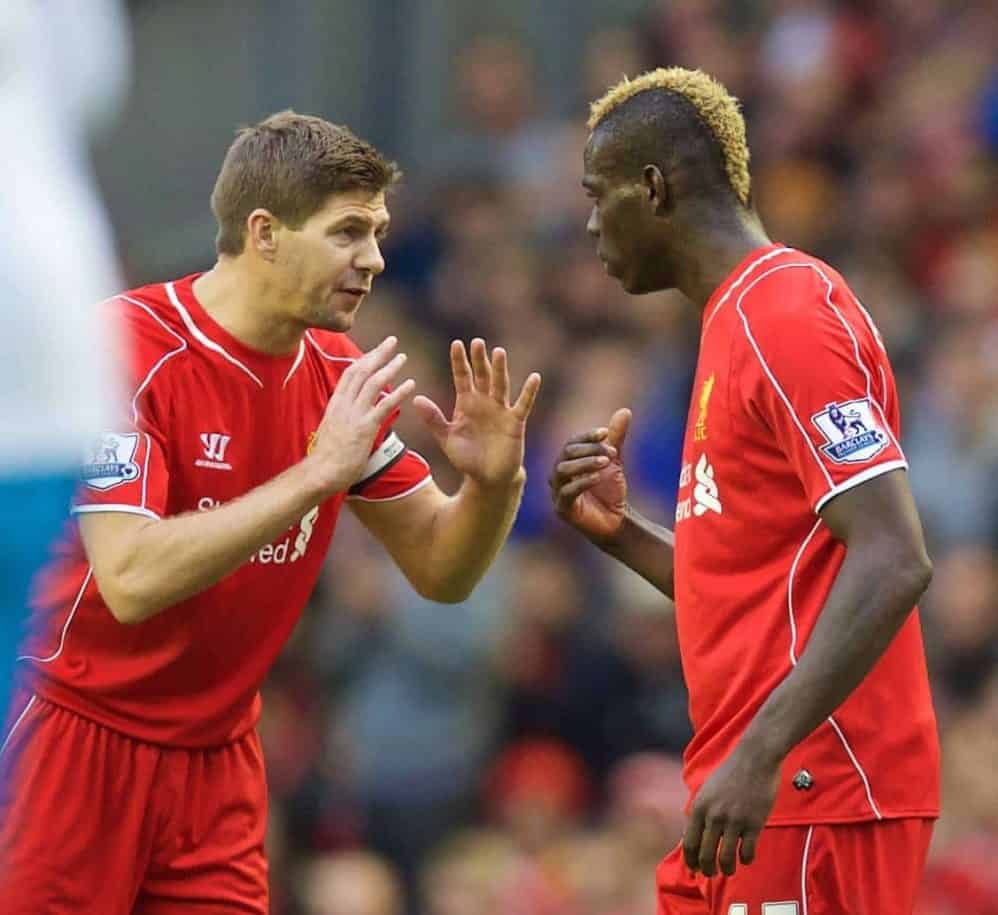 Jeff Goulding reflects on Liverpool’s first goalless draw in 48 games – and offers for Mario Balotelli, something he didn’t get in his lone forward role again.

Some decisions in life are easy, like when you wake up with a slight hangover and contemplate whether you actually want to go the match, given the gloom hanging over the club right now. You open the blinds and see that the whether matches your mood, but the pre-match butterflies dancing in your gut tell you to grow a pair and you realise there’s really no decision to make. Before you know your wrestling with the next big decision Fanzine or beer before the game. That’s easy too – you do both.

Then we come to the really big decisions. Those, that when you get it wrong, you find it really difficult to understand what was going through your mind in the first place. I am sure that the management team in the Flat Iron thought it was an excellent idea to hire a rock band to serenade supporters as the traipsed in after another less than satisfactory result. It really wasn’t. To be honest I felt more sorry for them than us.

Even harder to fathom, in hindsight, was the decision to persist with Mario Balotelli as a lone striker. The appearance of Rickie Lambert in the closing stages demonstrated that, if you are going to play him at all, Mario needs a strike partner. To continue to ask him to lead the line is placing unnecessary burden on the lad and giving his critics even more ammunition.

All of the chat before the game had been about Balotelli. I had convinced myself that he should be taken out of the team, and had gone for a front three of Lallana, Coutinho and Sterling in the false nine role. I was surprised that Rodgers decided to start with the enigmatic Italian, but I wasn’t too bothered. Many have questioned the managers decision making around the striker. Some suggest he was unfair to be critical of the player in the aftermath of the Madrid game, others are critical of the fact he signed him in the first place. Such is the polarising effect of Balotelli.

I can understand both sides of the argument, but on this one I am prepared to bow to the bosses judgement. Rodgers has always struck me as an excellent man manager. He sees the players on the training field everyday, talks to them, listens to them, and therefore he is ideally placed to decide whether a star needs a comforting arm or kick up the arse. On Wednesday he opted for the latter, at full time yesterday he chose to champion the strikers work ethic. This is the managers prerogative.

On whether we should have signed him in the first place, I argued it was far too early to judge. I wanted to see a bit more of the Mario that partnered Sturridge against Tottenham before I rush to any conclusions. Mario dominated the conversation and as we downed our glasses and left the pub,the debate continued into the ground, halted only by a discussion on the relevance of the excellent Black Flag protest against ticket prices. It was only a brief respite though, and as the game got underway the debate continued.

The first half went by in a bit of blur for me, and it wasn’t the beer. Liverpool were rarely threatened, but then we did little to set the pulse racing ourselves. For us this was frustrating. For Hull they must have thought Christmas had come early. With a squad devastated by injuries their game plan was understandably to leave with a point. The reds offered nothing in the first half to suggest they would leave disappointed.

It was far too easy for them. Steve Bruce felt sufficiently relaxed to exchange a bit of banter with the Kop. As one the old terrace belted out an ode to the Hull Boss’ unusually large noggin, and he responded by hiding it under his suit jacket. The Kop responded with laughter and applause. It was all very nice and sportsmanlike. Others have bemoaned the fact that we lack a nasty streak, or to quote an overheard snippet on the way home, “Liverpool need an ‘arl arse’ in the team”. I am proud of our reputation for recognising the qualities of the opposition. That’s how it should be. I was happy the Kop applauded off Madrid’s substitutes on Wednesday, but there are limits. I wasn’t happy that Glen Johnson was laughing and joking with Ronaldo during the game. The fact that we didn’t have a single player booked that night says it all.

What happened to us making a visit to Anfield the toughest 90 minutes of an opponents lives?

On Saturday, just like on Wednesday, for a good seventy minutes Liverpool rarely made their opponents sweat. We just didn’t get under their skin, and I doubt they ever thought that anything other than a draw was on the cards. All that did change though when a flurry of late substitutions changed the game if not the result. Lambert and Coutinho replaced Lallana and Allen just on the hour mark, and Henderson entered the fray on 75 minutes for the impressive Emre Can.

The arrival of a foil for Balotelli, the inventiveness of Coutinho and the energy and drive of Henderson finally gave the visitors something to think about. Frustration and fear gave way to hope, as wave after wave of attacks crashed against the Kop goal mouth. The noise level ratcheted up at last, gone were the sporting niceties the Kop were now baying for blood. It was all too little too late though. Why hadn’t we started this way?

The toiling Balotelli looked a frustrated and dejected figure as each chance went begging. It seemed easier to score some of them than miss. However, when you want something so bad, when the eyes of the world are on you, and you feel the pressure of the chattering classes willing you to fail, sometimes the easy becomes the impossible.

There can be no doubt that Mario Balotelli wants to do well for the Reds. To see him crest-fallen and crumpled on the turf at full time was as heartbreaking as the result. There is also no doubt in my opinion that he is a quality player.

He will have been glad of his managers words of encouragement after the game. He will have also taken comfort from the Kop’s continued chants of Mario Magnifico! Just like with Peter Crouch before him, who failed to net until December in his debut season, the roof is going to come off Anfield when Balotelli eventually, inevitably breaks his duck. Until then he shouldn’t walk alone.

Desperation and anger filled the air on the way back to Flat Iron. Unsurprisingly our moods hadn’t been lifted by George Sephton’s news that Bournemouth had beaten Birmingham 8-0 in the Championship. Passing conversations were a mix of the philosophical and the apoplectic, I was silent. Could things get any more miserable? Over to that poor Rock Band.