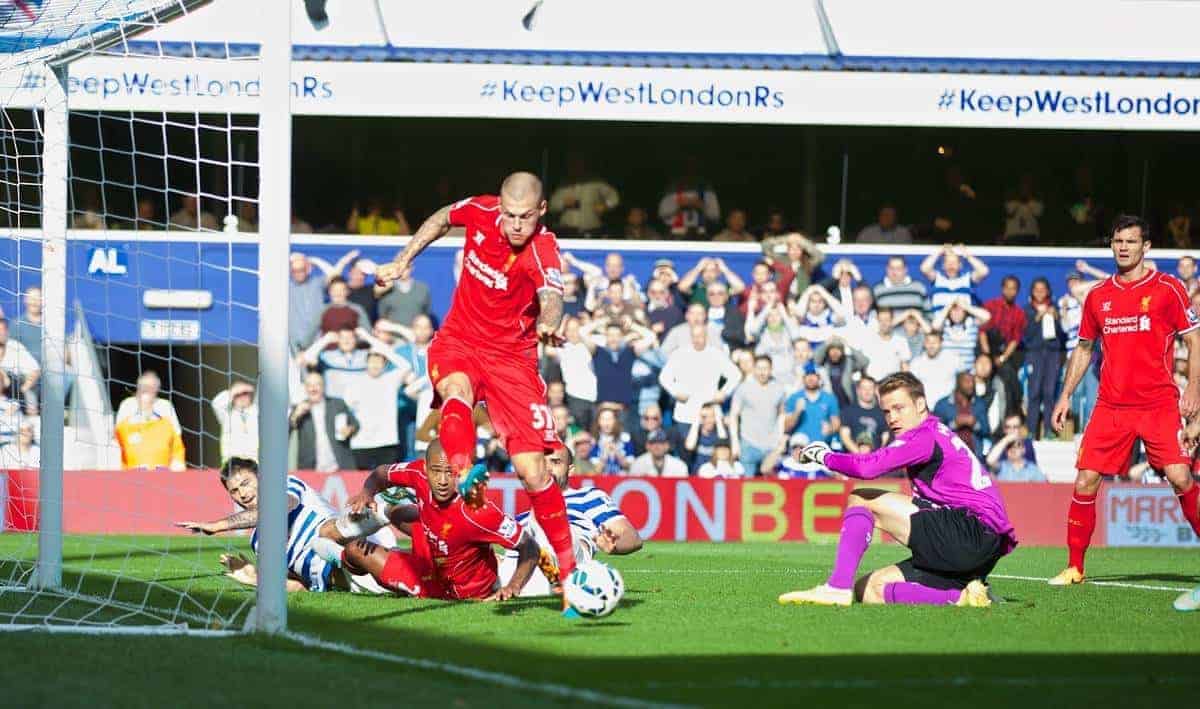 Despite scraping victory at QPR, Jack Lusby asks whether this current Liverpool defence is the club’s worst in Premier League history.

From Abel Xavier, to Christian Ziege, Gregory Vignal and Jan Kromkamp, to Djimi Traore and the much-loved Paul Konchesky, Liverpool Football Club has boasted its fair share of defensive catastrophes since the Premier League began.

But as Brendan Rodgers’ current side fortunately edged a 3-2 victory away to Queens Park Rangers at Loftus Road on Sunday, the back four of Glen Johnson, Martin Skrtel, Dejan Lovren and Jose Enrique staked their claim for the mantle of the club’s worst in the modern English top flight.

Coming up against Real Madrid on Wednesday night, this is far from encouraging.

Don't want to sleep for a couple of nights?? Replace these QPR players with Real Madrid ones … pic.twitter.com/LwHk4cqkHL

Jesus. You can't even joke about it. We have the worst defence I've ever seen in a Liverpool team. Worse than under Souness.

A far cry from the phenomenal spell between 2005/06 and 2009/10 under Rafa Benitez, wherein which the Reds conceded an average of 28 goals per season.

Benitez’s back four throughout most of that period would regularly feature defensive titans Steve Finnan, Jamie Carragher, Sami Hyypia and John Arne Riise.

Arguably, in Alberto Moreno and Javier Manquillo, Rodgers has found his new Finnan and Riise, but against QPR the Ulsterman’s back line may well feature as one of the most risible in the club’s Premier League history.

Signing Lovren this summer was supposed to bring leadership, tact and a quality in possession to the Liverpool back four. So far this has been a farce.

Despite an impressive display in his pre-season debut against Borussia Dortmund, Lovren has so far struggled under Rodgers after his £20 million move.

Deployed alongside Skrtel at Loftus Road, the duo looked to lack cohesion and composure, with Harry Redknapp’s side benefitting from numerous mistakes, although the R’s failed to capitalise in the first half, resulting in their eventual downfall.

For the second time today Gerrard looks at Lovren after a poor pass out. Not impressed. #QPRLIV

These errors mainly came with the pair’s failure in possession, often given the ball to an opponent.

Skrtel finished the game with a total of two defensive errors according to Squawka, with both leading to an attempt on goal by a QPR player, whilst Lovren is attributed by Squawka as having made one defensive error, with his failed headed clearance leading to Eduardo Vargas’ first goal.

Elsewhere, for a pair of physically capable centre-backs, Skrtel and Lovren were consistently dominated by a surprise attacking inclusion by Harry Redknapp on the day: A 33-year-old Bobby Zamora.

Bobby Zamora had a decent half; he created 3 chances in the first half, more than any other player on the pitch. pic.twitter.com/LDjLLeE87m

HR "they couldn't play Bobby Zamora. drop it off him and it worked."

The bulky centre-forward, making only his first Premier League start of the season, dominated Liverpool’s centre-backs with his ability to hold up the ball and bring his teammates into the attacking third.

Zamora presence also underlined Lovren’s bizarre approach to defending high balls, with the Croat launching himself in front of the England international with complete disregard for the ball on several occasions.

At this point, it seems that Lovren is trying too much to impress at his new club, and his partnership and lack of cohesion alongside Skrtel isn’t helping.

Rodgers would do well to perhaps give Lovren and his defensive flailing a rest against Madrid, and bringing Mamadou Sakho in from the cold may be the solution—the aggressive Frenchman wouldn’t have pandered to Zamora’s strength, that’s for sure.

Standing head, shoulders and a possible hair transplant above his teammates in terms of defensive recklessness, however, is Spanish left-back Enrique.

Fresh from an international break spent preening and selfieing in Dubai, Enrique was drafted into the starting line-up at the expense of Alberto Moreno, who was presumably being rested for the Champions League on Wednesday.

Not very good performance by the team but we will improve from it.the most important thing we got the 3 points.

Perhaps due to this being only his second Premier League appearance of the campaign, the former Newcastle United man struggled immeasurably; in contrast, however, Johnson managed to perform fairly ably on only his third start of 2014/15.

Much like his central counterparts, much of the disappointment surrounding Enrique’s display came with his frustrating failure in possession.

Jose Enrique has completed just 52% of his passes so far vs QPR; 1 of them was a glorious Hollywood pass, so it's OK. pic.twitter.com/X1swAzzjfH

Enrique continually ran himself into corners on the left flank, either by attempting to be too flashy or by failing to spot an easy pass; the 28-year-old finished the game with a passing accuracy of just 58 per cent, according to Squawka.

Moreover, when it came to the defensive side of the game, the left-back was equally as inept and for Vargas’ first goal, Enrique was particularly witless.

Failing to track the run of the Chilean international, with the QPR man intelligently following up on his initial delivery, Enrique watched on as Vargas got on the end of a well-worked move to head in past Simon Mignolet.

A bizarre lapse in concentration that has become a hallmark of Enrique’s game.

Such was the poor performance of the Spaniard, Rodgers has seemingly seen fit to recall Australian youngster Brad Smith from a loan spell at Swindon Town.

Brad Smith has been recalled to #LFC from his loan spell at @Official_STFC. pic.twitter.com/oSLmMdkcfz

The “technical reasons” behind Moreno’s omission from Spanish U21s duty may also be an underlying factor within this decision.

Enrique’s failures encapsulate all that is wrong with Rodgers’ defence, arguably since his appointment as Liverpool manager, and much work is to be done following this lucky victory at Loftus Road.

Would rather see a back four of Kromkamp, Biscan, Traore, Vignal than have those four in a game again.

To be honest, I'd rather see a complete change of back 4: Manquillo, Kolo, Sakho and Moreno #lfc

The returning Johnson did not perform as poorly as his colleagues, but perhaps all change is required to provide the defensive impetus against Madrid on Wednesday.

Is this truly Liverpool’s worst ever Premier League defence? Let us know your thoughts in the comments below.