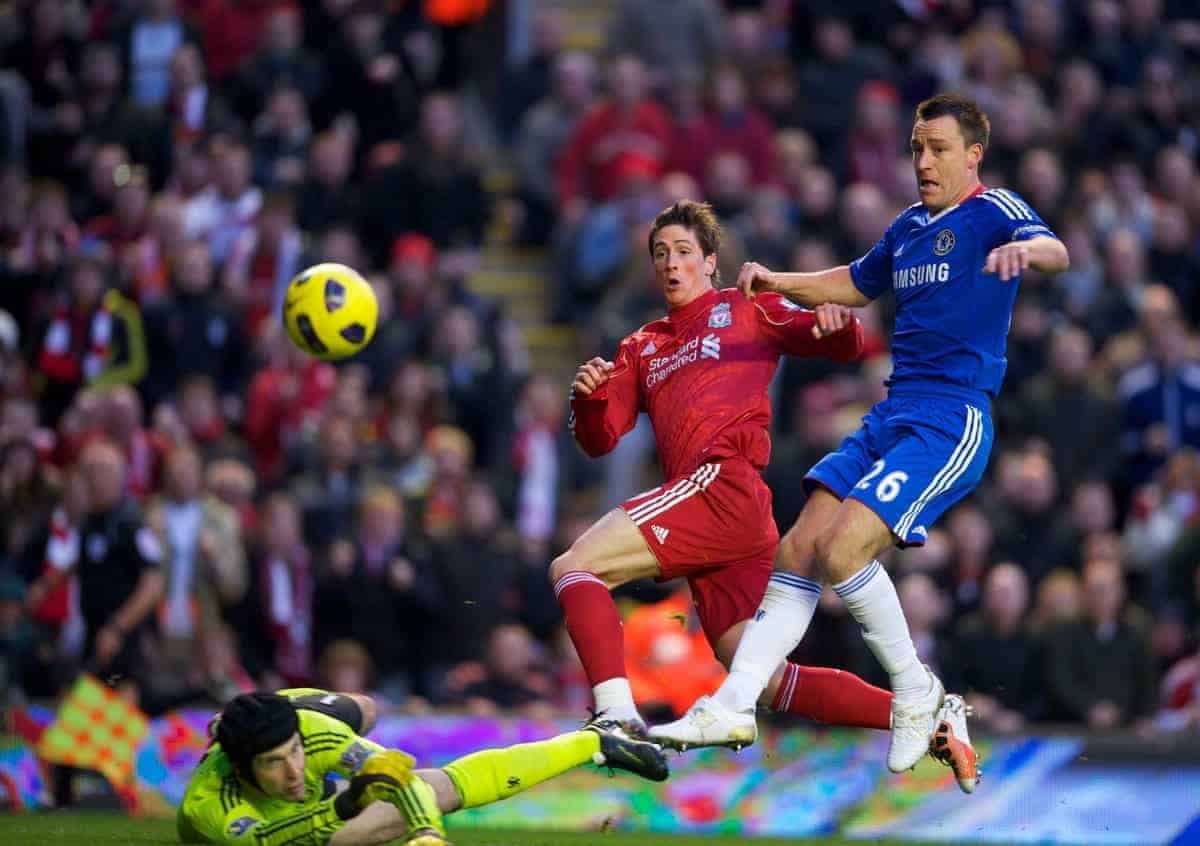 It’s four years to the day since a Liverpool side managed by Roy Hodgson defeated then-champions Chelsea at Anfield. Henry Jackson looks back at the game, and how the Reds were performing at the time.

Roy Hodgson had arrived at Anfield in the summer of 2010, but had already lost the fanbase by this point, having been knocked out of the League Cup by Northampton Town, suffered defeat at home to Premier League newcomers Blackpool and Hodgson having declared himself happy with the performance in a 2-0 defeat in the Merseyside derby.

The now England manager had signed numerous players clearly not up to Liverpool’s standards, including Paul Konchesky, Christian Poulsen and Joe Cole. He attempted to sign Carlton Cole too.

The Reds were in 15th place in the Premier League table going into the clash with Carlo Ancelotti’s league leaders, winning just three of their opening 10 league games.

Fernando Torres had been a shadow of the player who had terrorised the best defences in Europe between 2007 and 2009, with injuries and form both taking their toll on the Spaniard. He rolled back the years against the Blues, however.

Having nicked a 1-0 win at Bolton Wanderers in their previous league game – a win Hodgson called a “famous victory” – thanks to Maxi Rodriguez’s late winner, Hodgson knew victory over Chelsea could prove to be another momentum boost in their stuttering campaign. It’s fair to say not many fancied them to pick up all three points though.

There were two changes for Liverpool, with Martin Kelly and Dirk Kuyt replacing Sotirios Kyrgiakos and Cole, respectively. Kuyt’s return from injury was a big boost, in particular. Chelsea, meanwhile, were without Didier Drogba, Frank Lampard and Michael Essien.

Kuyt and Torres linked up brilliantly for the opening goal of the game, with the Spaniard racing onto a clever pass from the Dutchman, before finishing clinically past Petr Cech at the Anfield Road end.

The visitors barely threatened throughout the first-half, and Liverpool were deservedly 2-0 up a minute before half-time. Raul Meireles found Torres out wide, and ‘El Nino’ cut inside and bent a stunning effort into the far corner. It was the Torres of old.

Although the Blues dominated much of the second-half, creating numerous chances, Hodgson’s men held on for a priceless win over the champions. Although some felt it may the start of a resurgence by the Reds, they were wrong.

Liverpool’s form continued to be extremely inconsistent following that victory, with just three victories in their next nine Premier League games. A 1-0 defeat to Wolves at Anfield in December was a particular low point, and it was obvious that Hodgson’s time at Anfield was coming to an end.

The final straw came following a tepid 3-1 defeat to Blackburn Rovers at Ewood Park in January 2011, and he was sacked a few days later. It has to go down as one of the worst spells in charge by a Liverpool manager. Kenny Dalglish replaced him in the Anfield hot seat, amid much joy from Liverpool supporters.

Within a few weeks of the legendary Scot’s return, Torres chose to join Chelsea for £50m, in a move that makes Torres unpopular with Liverpool fans to this day. His destruction of his new employers would prove to be the last thing of note he did in a Reds shirt.

Dalglish made a big difference to the general mood and atmosphere at the club, and having been in the relegation zone at one point under Hodgson, he guided them to a respectable sixth place Premier League finish.

It may have been a season to forget, but the Torres inspired win over Chelsea was one of the most memorable days of the season.

Let us know your memories from that day back in 2010 in the comments section.