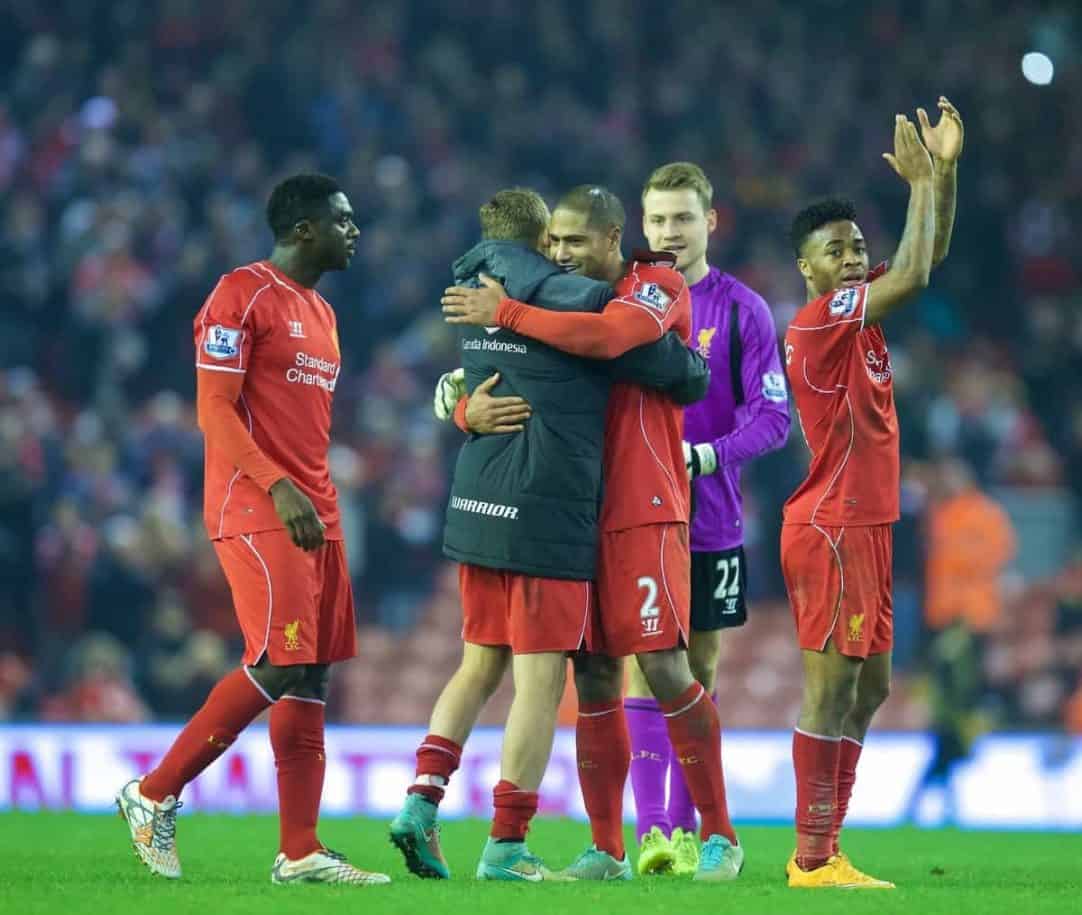 It was the cliched game of two halves for Brendan Rodgers’ side – who were much improved in the second half after a poor opening 45 minutes which saw neither side with a shot on target.

A much improved performance from the under fire keeper; making multiple saves late on, one an excellent finger tip over the bar as Stoke pushed for an equaliser. Also collected a corner late on – much to the applause of Anfield.

Awarded a 7 merely for his credible and brave headed goal, showing commitment to the cause not seen from the 30-year-old in a long time. There was a more typical Johnson moment in the first half when he heart heartedly attempted to dribble past a Stoke forward on the edge of the box, failing woefully and being easily pushed off the ball.

A solid display but not greatly troubled all afternoon. Again looks far more assured with Toure alongside him rather than Lovren.

Adds a leading presence so the Liverpool defence so often lacking of late. Assured, comfortable in possession and easily Liverpool’s best defender on current form.

Recalled for the first time since a pretty awful performance at QPR, Enrique didn’t venture forward much and played his usually predictable diagonal balls and passes down the line, rarely did they come off.

Energetic and admirable, but it’s not quite working for Hendo at the moment.

Won tackles, broke up play and looked comfortable as Liverpool’s defensive midfielder. Should have scored when Liverpool broke with 5 vs 3 midway through the second half but his shot was too close to Begovic and comfortably saved.

A tidy performance but was deployed very deep alongside Lucas almost like two defensive midfielders during the first half especially. Should have scored when his shot from close range clipped the top of the bar. Moved into defensive midfield role after Gerrard’s introduction and looked at home. Won more tackles than any other Liverpool player (4).

By far Liverpool’s biggest attacking threat, again. His pace caused Stoke problems but often there was nobody to profit from him. Tried hard to link up with Coutinho but it just didn’t quite click. Beat

Tried hard and almost scored a superb goal after a typical mazy run from the centre in the first half but was crowded out with little support. Withdrawn late on.

Held the ball up well but still seems to be struggling with life at Liverpool in home games. He had a good chance in the second half but his shot was low and weak, easily saved by Begovic. Three full games in a week for the 32-year-old and he seems to be benefitting from playing regularly.

The skipper replaced Lucas with 15 minutes to go as Liverpool shifted from 4-4-1-1 to 4-3-3. Gerrard operated in one of the two more advanced midfield roles, with Allen at the base of the three.

Rodgers was preparing to bring on Adam Lallana just before Johnson’s goal. He changed that to introduce Lovren instead, going to five at the back.