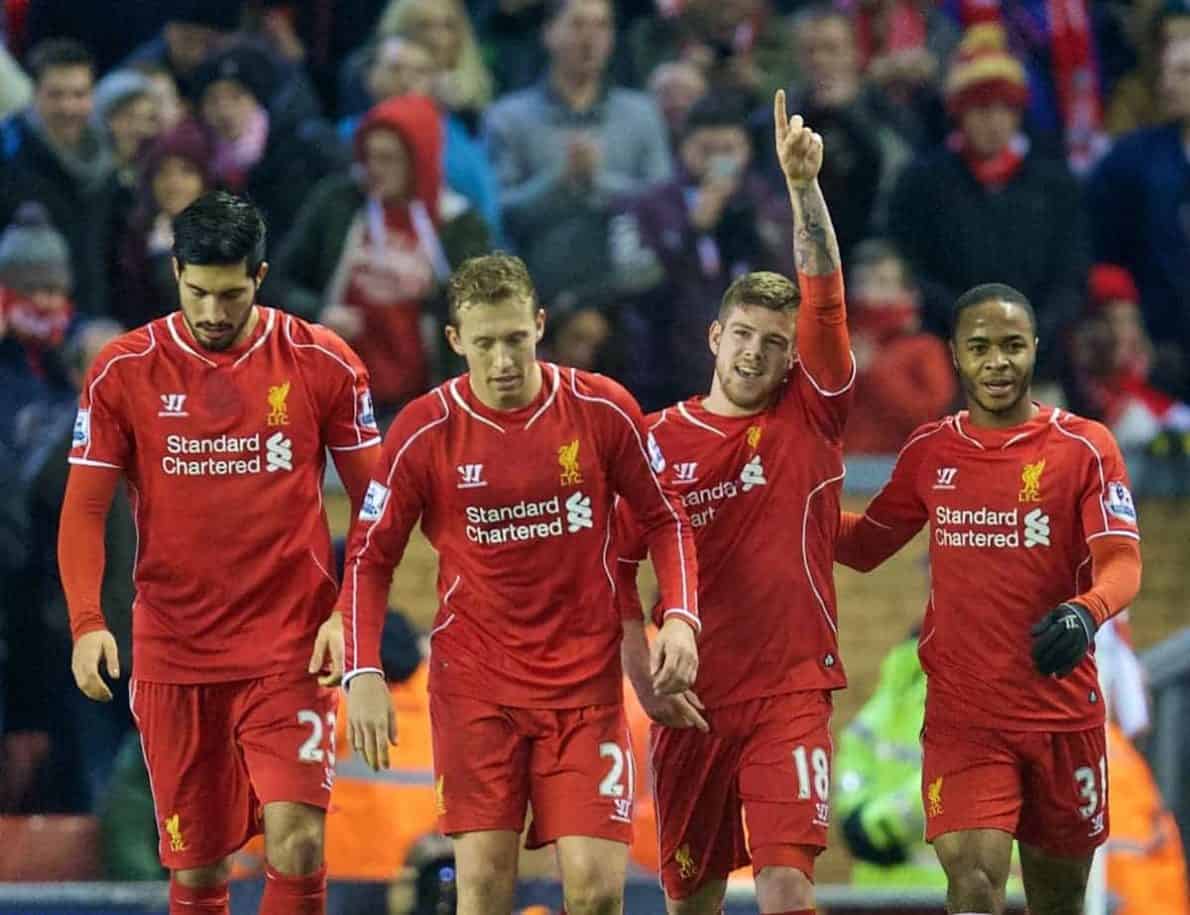 In a performance hallmarked by attacking play, a defensive display from Emre Can in Liverpool’s 4-1 win over Swansea City still shone, writes Jack Lusby.

It was the line-up that many Liverpool fans have been calling for for the majority of the season so far; against his former side, Swansea City, Brendan Rodgers fielded a bold side.

Rodgers, forced by the rigours of the festive schedule, shuffled his pack, with several of the players who started in Boxing Day’s 1-0 victory away to Burnley rotated.

Out went Steven Gerrard, out went Kolo Toure and, perhaps more surprisingly, out went Lazar Markovic — the latter had impressed in recent games in a left wing-back role.

One outstanding feature in this much-changed starting XI was Emre Can.

PHOTO: The jersey Emre Can will wear for #LFC tonight. He starts in defence for the Reds against Swansea pic.twitter.com/ph5tPpj99f

The 20-year-old started the game alongside Martin Skrtel and Mamadou Sakho in a back three, and had a big challenge on his hands, with the likes of Wilfried Bony, Nathan Dyer and Wayne Routledge set to thrive off the majestic creativity of Gylfi Sigurdsson.

However, a hugely comfortable display from Can in Monday’s 4-1 victory over Swansea will give Rodgers much to think about, and finally it is in a positive light.

Signed, ostensibly, to bolster Liverpool’s midfield ranks, Can’s role as a right centre-back at Anfield outlined a different set of qualities in the 20-year-old.

Prior to the game, This is Anfield’s Henry Jackson outlined how Can could make the centre-back role his own.

“Despite his undoubted excellence in midfield, his future should lie at centre-back for now—especially if [Liverpool] are to continue with three at the back where the right and left sided centre-backs must be mobile and dynamic.”

With Sakho operating on the opposite central defensive flank, with Alberto Moreno ahead of him and the primarily defensive Javier Manquillo at right wing-back ahead of Can, this role suited the German perfectly on Monday.

Can showed his strength in defence by expertly shepherding former Red Jonjo Shelvey off the ball in the Liverpool penalty area on 39 minutes.

Receiving an elbow in the jaw from the petulant Swansea midfielder in return serves as evidence of Can’s overbearing presence.

Shelvey lucky to get away with a swinging arm into the face of Emre Can. Could easily have seen red.

Furthermore, an exceptional raking long pass in the opening 10 minutes displayed the midfielder’s passing ability; were it not for a heavy touch from Moreno, Liverpool could have started with a bang.

Can’s masterful attributes were on show as the defender helped Liverpool win the key battles in their own half.

Retweet if Emre Can was your #LFC man of the match against Swansea… pic.twitter.com/W1zSz3oIBg

One name stood out in the build-up for Swansea, with Ivory Coast centre-forward Bony in exceptional form for the Swans so far in 2014/15.

A formidable physical presence, Bony has been flagged as one of the ones that got away for Liverpool in the summer transfer window, and the striker’s aerial and physical presence is the antithesis of the struggling Mario Balotelli’s play.

Fortunately, Can was part of the Liverpool defence that kept Bony under wraps; the 20-year-old consistently matched Bony for strength.

Sigurdsson has been the player fuelling Bony’s finishing brilliance this season, having returned to the Liberty Stadium as Swansea’s most beloved and most important player.

Helpfully, Rodgers’ set-up on Monday perfectly suffocated Sigurdsson’s qualities, and Can was central to this.

Working towards a group effort in continually pressuring the dangerous playmaker as swiftly as possible this, as Luis Suarez outlined in his recent autobiography, is in keeping with Rodgers’ philosophy: “[We had to] keep possession of the ball and, if we lost it, to pressure to get it back.”

Lucas Leiva, Jordan Henderson, Manquillo and finally Can—serving as the final line of defence against Sigurdsson—swarmed around the midfielder, stymieing his creativity.

As mentioned, one blemish stands with Sigurdsson’s goal, but on the whole, the midfielder was successfully annulled throughout; a key factor in Liverpool’s ease to victory.

Much of Liverpool’s success of late has stemmed from a tactical switch by Rodgers, and Can has fitted into this adroitly at centre-back against both Burnley and now Swansea.

Can, Skrtel and Sakho served as a balanced back three, with Skrtel’s raw qualities matched by the pair’s composure in possession and intelligent use of defensive strength.

After his troubles at the back, will Dejan Lovren be able to force his way back into the side now?

His only chance, at present, may fall due to Can’s versatility; Rodgers spoke of this positive quality prior to the game.

Rodgers on Emre Can: "He's a player we brought in because he's multi-functional." Gives #LFC great tactical flexibility.

At just 20 years old, Can excelled in a relatively new role at centre-back—having played there sporadically for Bayer Leverkusen and the Germany U21s—and it is this versatility that will endear him most to Rodgers.

While this 3-4-3, high-tempo, intensive system is working wonders for the Reds at present, there will be times this season when Rodgers will need to switch his system.

Can’s ability to perform at centre-back, in the centre of midfield—as he has shown previously this season—and further as an auxiliary full-back will allow Rodgers room for maneuver.

At 20 years old, Emre Can is more composed & competent in a position, centre half, that he's played sporadically than Skrtel

An outstanding, confident, composed performance at right centre-back against Swansea City on Monday night outlined just how effective Emre Can will be for Liverpool as Brendan Rodgers move his side forward.

Liverpool’s attack may have shone, but their defence was much improved with the German in the side.

Should Emre Can continue as Liverpool’s centre-back after Monday night? Let us know in the comments below.