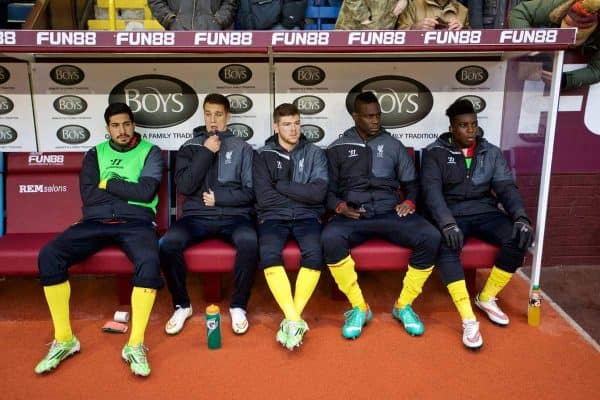 How Liverpool could line up for Swansea clash: Reds need rotation

Liverpool host Swansea City at Anfield for the second time this season on Monday night as the Reds look to build on Boxing Day’s victory over Burnley. Ben Twelves discusses the possible team selection options available to Brendan Rodgers for the tough match.

Liverpool return to Anfield following Boxing Day’s scraped 1-0 win over Burnley for the first of a home double header against Swansea on Monday night, before Leicester arrive three days later for the first game of the New Year.

It was far from a spectacular performance from Liverpool against Sean Dyche’s team last time out, but the result was the all-important factor in the first of an extremely winnable set of matches which could see Rodgers’ side place themselves right back in the mix for a top four challenge should they take maximum advantage of the kind run.

BR: "It was a great three points for us yesterday. Credit the resilience and character of my players."

While it’s never a bad thing to win ugly as the Reds did on Friday afternoon, maximum points only mask fundamental issues in performances and Liverpool will certainly have to address theirs and improve against Gary Monk’s team, who have already caused big problems at Anfield once this season in the Capital One Cup.

Rodgers almost paid the price for naming an unchanged and tired starting XI against second-bottom Burnley – which was reflected in an extremely lethargic performance – and with the Reds now set for two more matches in the space of just four days, the Northern Irishman must keep his side fresh with rotation needed over the upcoming fixtures beginning on Monday for the visit of the Swans.

Rodgers confirmed in his pre-match press conference that little has changed with those available for selection, but Brad Jones is set to surrender his position in goal to Simon Mignolet as the Australian was substituted due to a thigh injury after just 16 minutes against Burnley.

Jon Flanagan, Dejan Lovren and Joe Allen are therefore all unlikely to be involved also but Fabio Borini could return to the squad after serving his one match suspension, though question marks hang over Kolo Toure’s availability after the experienced Ivorian was replaced in the back three at half time by Emre Can on Boxing Day.

BR: "Emre Can can play centre-back. He has as big future here but it was curtailed by his fitness, missing training."

The powerful German will be hopeful of keeping his place in the back line alongside Martin Skrtel and Mamadou Sakho after an assured second half display and with little other option available currently it seems a genuine possibility.

Steven Gerrard desperately needs a rest from the midfield battle after playing all but four minutes in the last five games and with options short, Rodgers will have to shuffle his pack to make that happen with Alberto Moreno an available option to come in, allowing for Jordan Henderson to move centrally.

Mario Balotelli regained his place on the bench for the trip to Turf Moor, but with the Liverpool managers’ recent comments on the Italian’s unsuitability to the way the Reds boss wants his team to play, the front three of Adam Lallana, Philippe Coutinho and Raheem Sterling is likely to remain the same – with Balotelli once more on the bench.

Despite the similarly looking squad at his disposal, Rodgers does have options available to introduce fresh legs to his side on Monday.

Mignolet will come into the team in goal and after a solid second half Can should keep his place in the back three – something Rodgers has hinted could happen.

Gerrard needs to make way from the middle of the park and Moreno should come into the side on the left of midfield with Markovic switching to the right, allowing Henderson to relocate to a much preferred central position alongside Lucas.

The front three is likely to remain the same, but with Balotelli back and available – and having shown at Old Trafford in his last outing that with mobility around him he can be a threat – the Italian should come into the side for Lallana to provide a boost to a tiring Reds attack alongside Coutinho and Sterling.

Those changes in the 3-4-2-1 system would see Liverpool line up like this:

Another option for the Liverpool boss is that he could give his side a more solid look but with a high energy midfield and two man strike partnership in the comfortable 4-diamond-2 formation. In that shape, the Reds should line up like this:

However, with the 3-4-2-1 bringing an improved attacking edge back to the side in recent games, I expect Rodgers to keep faith with the system and therefore Liverpool to line up like this come kick-off Monday night:

After a number of games of failing to match performance level with a desired result, Liverpool swung to the opposite on Boxing Day as they failed to match a positive result with a worthy performance.

BR: "The spirit and mentality of the team is still strong. Difficult period of games at the moment."

The balance between the two components continues to evade Rodgers and his team but the fixture against Swansea will need to see the factors in much closer proximity in order for Liverpool to record another welcome victory against Monk’s underrated side.