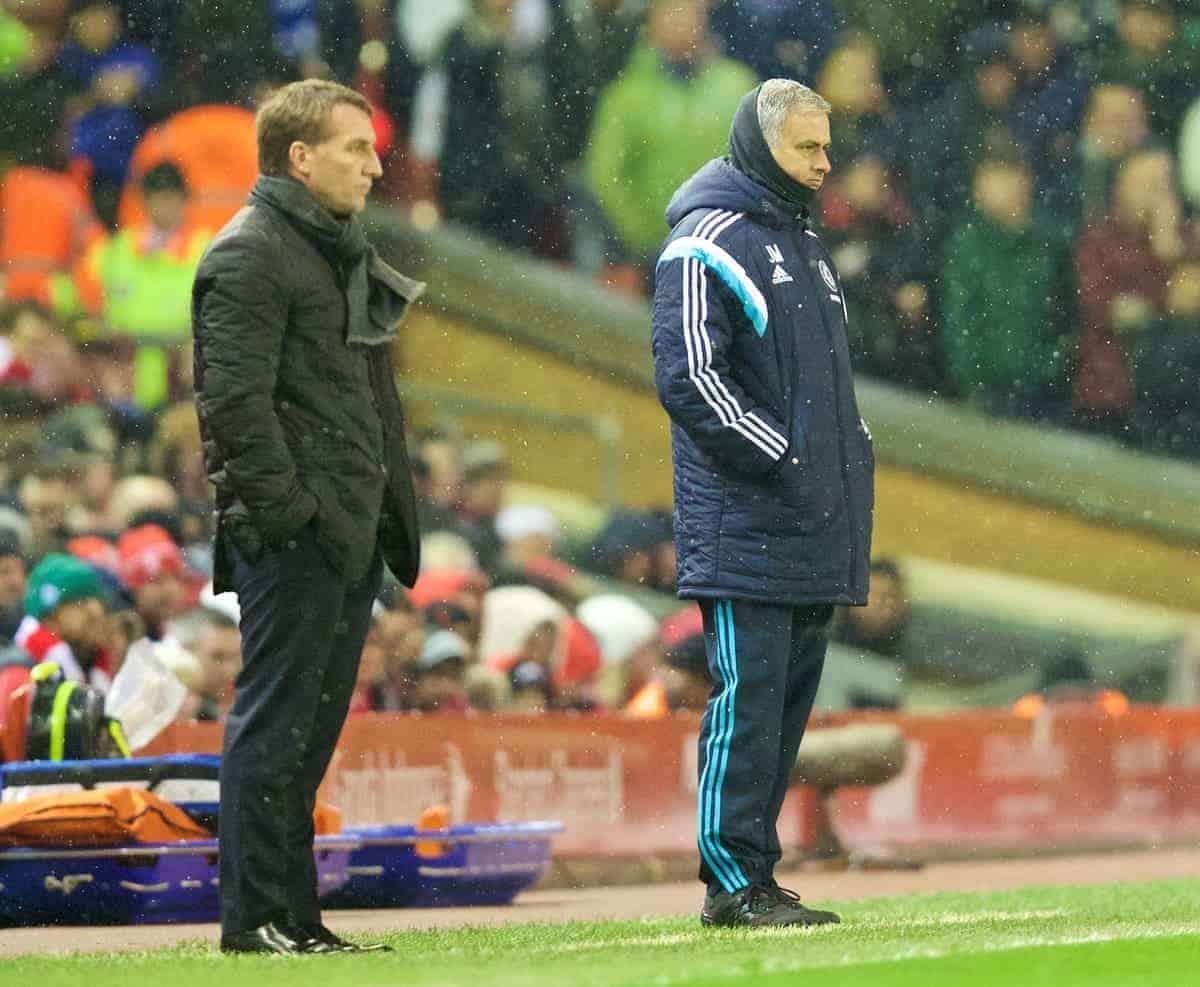 Liverpool manager Brendan Rodgers and Chelsea counterpart Jose Mourinho both felt their sides should have scored more in their Capital One Cup semi-final first leg.

However, the Blues boss had cause to be the happier with the 1-1 draw which makes his team favourites heading into next week’s second encounter.

Chelsea were indebted to goalkeeper Thibaut Courtois for ensuring there was still something to play for in the second leg as the Belgium international kept the hosts at bay with a string of saves after the break.

“Obviously Liverpool didn’t deserve to lose but I go (away) frustrated,” said Mourinho. “We had lots of situations where we recovered the ball in a low block, we recover the ball so many times, and we were facing a three defenders tactical system with lots of space to counter-attack.

“Eden (Hazard), Willian and Diego (Costa) were in great positions but we missed so many passes. Recover the ball, lose the ball. Exactly the opposite that happened against Swansea (in a 5-0 win on Saturday). Against Swansea, (we would) recover the ball, (pick) the right pass and choice and counter-attack.

“Today it was fantastic defensive work, recover the ball against a very good team with creative players, fast players, but we were not efficient in the transition. To score only one goal frustrates me.”

Chelsea went ahead through Hazard’s 18th-minute penalty but that was their only shot on target, and a brilliant solo effort from Raheem Sterling levelled things up.

Liverpool should have gone on to win, given the chances they created, and Rodgers said: “I thought we were outstanding. They will probably feel happy with the draw because we definitely deserve to win.

“Our performance level was at a top level. It was a real good game but they had one shot on target, which was the penalty.

“Our creation was at a high level. The only thing missing was the final finish. It was an outstanding team performance and sets it up perfectly for the second leg.

“You would expect Chelsea to open up even more playing at home and that will suit us even more.

“There is absolutely no doubt we can go to the second leg and get the performance we need and we will have confidence in that.”

Liverpool could have striker Daniel Sturridge back for that after he stepped up his rehabilitation from a thigh injury which has kept him out since August 31. In his absence, Sterling, who was given a week off recently, has filled a void and he took his chance brilliantly for the equaliser.

“It was very good. The rest has done him the world of good. He was outstanding,” added Rodgers. “He has that ability to run in behind but he can also exploit the space in front of the defender.

“His speed was frightening to get in and finish off his left side, it was a wonderful goal and he certainly deserved that for his performance.” Liverpool could also have a penalty, with Diego Costa appearing to handle while on the ground, and Courtois seemed to handle outside the area.

“I was so disappointed we never got at least one penalty. It is a clear handball by Costa so how we didn’t get that…”

Rodgers added. “Their goalkeeper, who had to be outstanding, has also handballed it outside the area.”