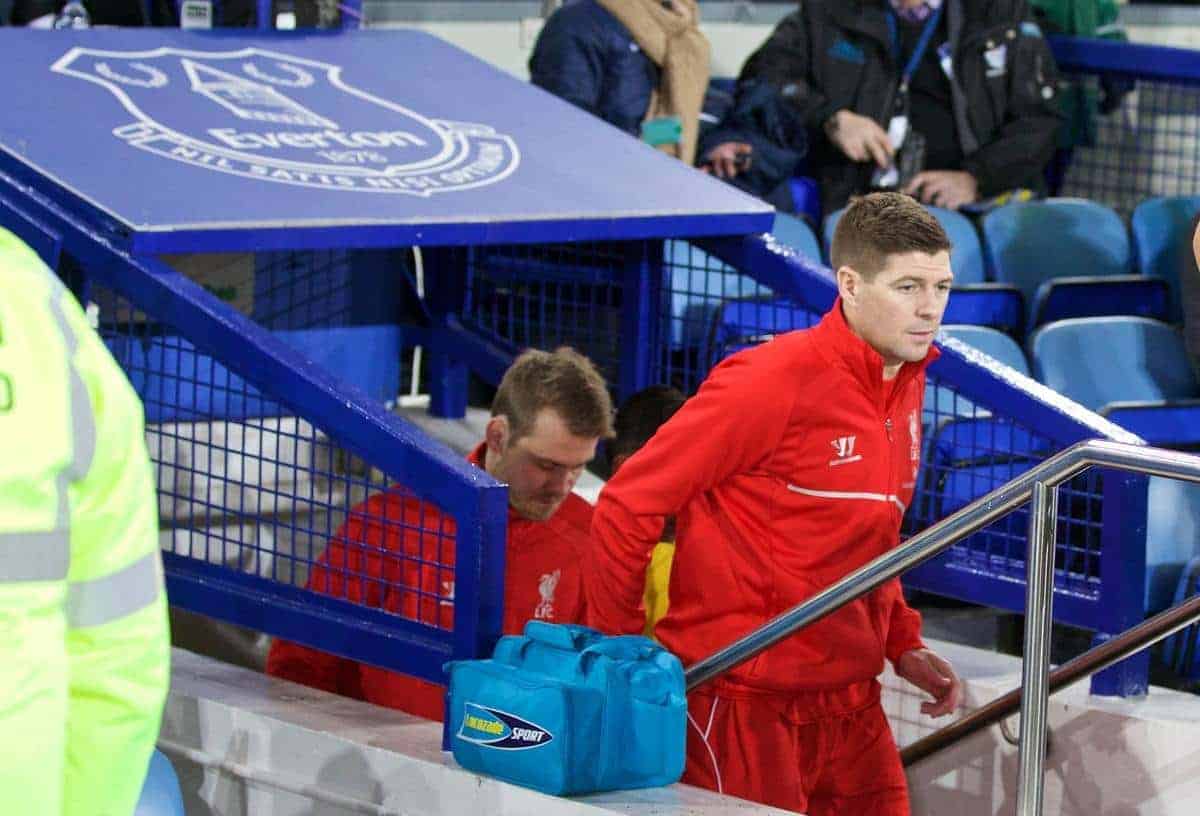 Matthew Lucas is looking for Brendan Rodgers to strengthen his centre-midfield options in wake of the Everton performance showing how we need more beyond Lucas and Henderson.

As Steven Gerrard walked away from what will likely prove to be his last Merseyside Derby as a player, there was a noticeable sense of frustration around the away fans at Goodison Park. In an uninspiring display from both sides that lacked creativity and excitement, Liverpool were forced to settle for a goalless draw – a far cry from the enthralling encounters of last season. Amidst the disappointment of the match, eyes turned to Brendan Rodgers’ use of substitutions, and the impact – or lack of – coming from the players called on from the bench.

After just sixteen minutes, Lucas Leiva was forced to leave the field after aggravating a groin problem that had been troubling the Brazilian in the days leading up to the match. Following an impressive show of form in recent weeks, Lucas has rapidly become one of the first names on the teamsheet for Liverpool.

However, turn merely a month or so into the past and any discussions concerning the player inevitably centred on the January transfer window, and whether it was the right time to let the midfielder move on, with Inter Milan, amongst other clubs, rumoured to have shown an interest. Whilst the Brazilian eventually stayed at the club, talk of a move was very real, and begs the question of how Liverpool’s deeper midfield would operate without Lucas.

Leiva’s replacement, Joe Allen, presented himself as a prime example of Liverpool’s failure to address key issues in the squad over both the summer and January. Showing little of the initiative and solidity of his predecessor, Allen often looked to safely retain possession rather than turning and driving forwards.

Frequently muscled off the ball, the diminutive midfielder quite obviously struggled to ease himself into the game, and lacked the physical presence of the injured Lucas. Whilst he has shown glimpses of skill during his Liverpool career, Allen’s play this season can largely be described as adequate but nothing more, and certainly not enough for a club with Champions League aspirations. In a team which requires every player to actively impact the game, the role of Allen is increasingly coming under scrutiny from fans.

Gerrard, meanwhile, struggled to put his stamp on the game. Rather than leaving in a blaze of glory in a fierce, fiery encounter, the Reds captain seemed to watch the game pass him by, unable to provide the spark to ignite such a highly anticipated spectacle.

For any Liverpool fan that has watched Gerrard often single-handedly drag the team through matches, seeing time eventually begin to catch up with the player makes for difficult viewing. Too often the opposition now outmanoeuvre the midfield when Gerrard plays, who is unable to grant the energy and activity that so characterised his career.

With Gerrard set to finish his career at LA Galaxy and Allen persistently under-par, the base of Liverpool’s midfield appears in need of serious attention in the coming transfer windows.

The current first-choice pairing of Henderson and Lucas complement each other well; Lucas provides solidity and a reliable shield for the defence which allows Henderson to effectively use his extraordinary energy across the centre of the pitch.

However, look beyond the duo and it is difficult to see players of the required calibre that can be constantly relied upon to provide a solid performance in the deeper midfield roles.

Emre Can is currently employed as the furthest right of the three central defenders, and has looked extremely assured in his defensive role. There has been pressure on Rodgers to move Can into the base of midfield, and his calmness and willingness to carry the ball forwards only reinforces such views.

Yet, with the considerable improvement in defence recently, it would be foolish to unnecessarily alter such an effective system. At this moment in time, Can looks very much to be primarily a defender rather than midfielder.

It is crucial, then, that Liverpool address the void in central midfield that exists beyond the pairing of Lucas and Henderson. At a club where aspirations are set firmly at the top of the league, it is vital to have strength in depth, especially in the central positions.

Whilst the club can get through games with the current set-up, the need for reliability, presence and solidity on the bench is becoming an ever-increasing need, and one that Rodgers surely must grant his attention in the coming transfer windows.