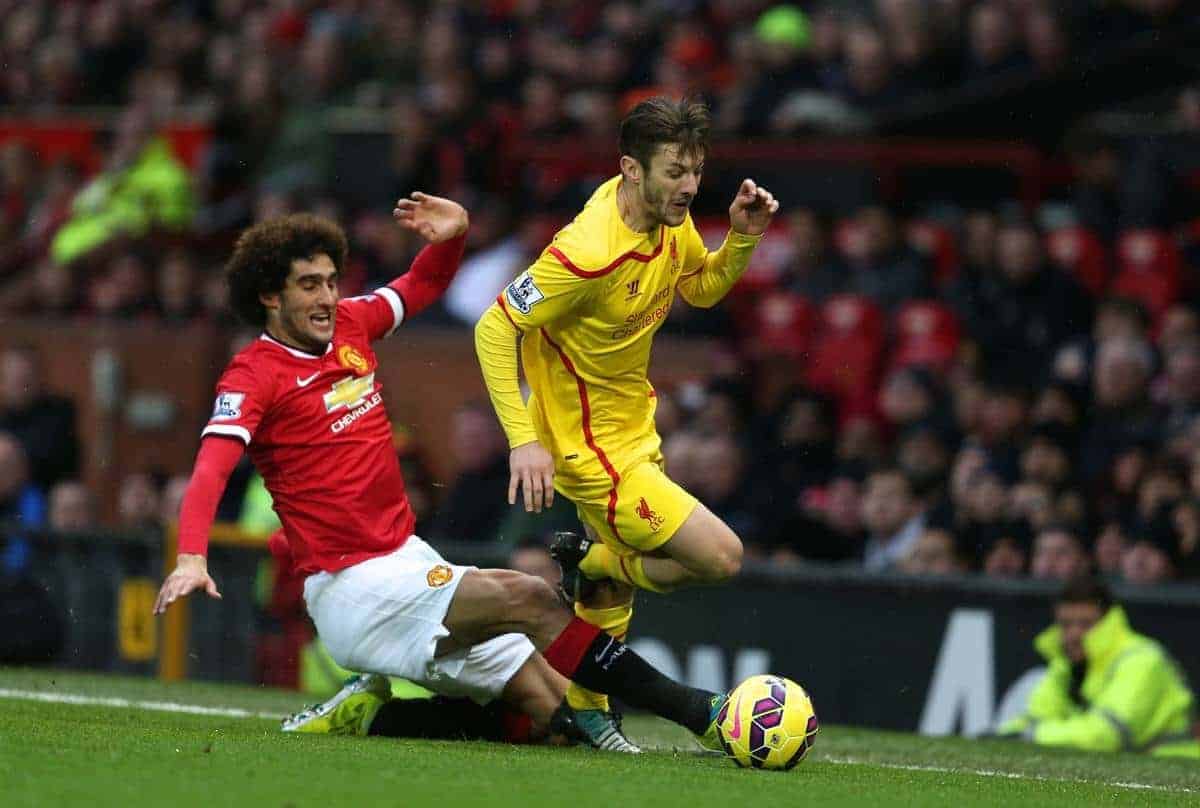 Liverpool face Man United in a potentially pivotal Premier League clash at Anfield on Sunday. Henry Jackson selects his combined XI between the two sides based only on their 2014/15 form.

Sunday’s showdown promises to be a tense, feisty affair, and may well go a long way to deciding who finishes in the top four at the end of the season.

There have been some terrific performers for both teams throughout the campaign, but some of the more high-profile names have struggled.

Steven Gerrard has been up and down as age has caught up with him, Daniel Sturridge has struggled since returning from injury and Angel Di Maria and Radamel Falcao have not come close to reaching the heights many expected of them.

So who has been the pick of the bunch? Here’s our combined XI between the two biggest rivals in English football, based on this season’s form (3-4-3 formation):

On current form, there is definitely an argument to say that De Gea is the world’s best goalkeeper, given how often he is called upon compared to Manuel Neuer and Thibaut Courtois. He has made 2.7 saves per game in 2014/15 so far.

The Spaniard has been far and away United’s standout player this season, making some truly remarkable saves and keeping them in matches. They are probably six or seven points better off because of him.

Simon Mignolet has had an unbelievable turnaround in fortunes since the turn of the year, but despite this, he is still not on the same level as De Gea right now. Can was a relative unknown to many when he joined from Bayer Leverkusen last summer, but he has been a revelation on the right-hand side of Liverpool’s back-three.

The 21-year-old has all the attributes to become a world-class footballer in the future- pace, power, excellent technique and a good reading of the game- and has been the best of Brendan Rodgers’ summer purchases.

Skrtel didn’t start the campaign in impressive form, mainly due to being played alongside the hapless Dejan Lovren, but he has been magnificent in the last three months or so.

The Slovakian has blossomed since Rodgers deployed three at the back, making countless blocks, interceptions and clearances. He is a big reason for the Reds’ six away clean-sheets in succession in the league.

Phil Jones and Marcos Rojo have impressed at times for the Red Devils but found themselves in and out of Louis van Gaal’s side because of injury.

There are some who still bizarrely see Sakho as some sort of weak-link who can’t pass properly, but it is a total myth.

The 25-year-old Frenchman has been colossal at times since finding a way back into the team late last year, enjoying a pass completion rate of 89 per cent and winning more than half of his average duels.

He could become one of the Premier League‘s best defenders over the next couple of years.

Clearly Henderson is at his best in the centre of midfield, but given the inconsistency of Lazar Markovic and Antonio Valencia, the Liverpool vice-captain would do better than both in the role currently.

The 24-year-old is in particularly sparking form at the moment, scoring three goals in as many games, and his all-round influence both on and off the pitch is growing by the week. Surely Liverpool’s next captain.

Because of his injury troubles of late, it’s very easy to forget just how influential Lucas was to Liverpool’s turnaround in fortunes at the end of 2014.

The 28-year-old came back into the side and gave the midfield much-needed defensive cover, as well as an element of calm and composure. He may struggle to get his place back following Joe Allen’s recent resurgence, but his earlier excellence should not be forgotten.

There have been many United players who simply haven’t performed this season, but Blind certainly goes down as one of their success stories in 2014/15.

The Holland international is a classy footballer, both in midfield and at left-back, using the ball effectively and showing a good positional sense.

His late equalisers at both West Brom and West Ham highlighted his never-say-die attitude, and could prove vital come the end of the season.

Young hasn’t always endured the happiest time at Old Trafford, and having been seemingly surplus to requirements last summer, he has arguably been their best outfield player this season.

The former Watford and Aston Villa winger has looked a threat with his pace and consistent final ball, while defensively he has also been impressive. The last-gasp winner he scored at Newcastle was of huge importance.

Alberto Moreno has been solid but unspectacular, while Luke Shaw has suffered with form and injuries.

Like many Liverpool players, Coutinho did not play to his optimum level during the early stages of the season, but he has been majestic at times in 2015.

The Brazilian has scored stunning goals against Bolton, Southampton and Man City, and his general touch, vision and influence have been a joy to watch. One of the Premier League‘s most exciting and naturally gifted players.

So much is expected of Sterling now in every game, given his meteoric rise, but it’s still so easy to forget he is only 20 years of age.

The England starlet is the Reds’ joint-top scorer this season with 10 goals, and his pace and trickery has terrified the country’s best defences. His superb solo effort against Chelsea in the League Cup was a memorable moment.

Di Maria has disappointed greatly, as mentioned, while Juan Mata, Adam Lallana and Adnan Januzaj have not been anywhere near consistent enough.

Rooney may not exactly be loved by the Liverpool supporters, but it’s impossible to deny that he has been impressive this season.

There is more of a maturity about the United and England captain now, and while Robin van Persie and Falcao have floundered, he has stepped up to the plate in both a midfield role and as a striker, scoring 13 times.

Sturridge remains well short of his best form, while Mario Balotelli, Rickie Lambert and Fabio Borini have completely failed to set the world alight on Merseyside.

All statistics via Squawka and WhoScored

Who would make your Liverpool and Man United combined XI, based on this season’s form? Let us know in the comments below.