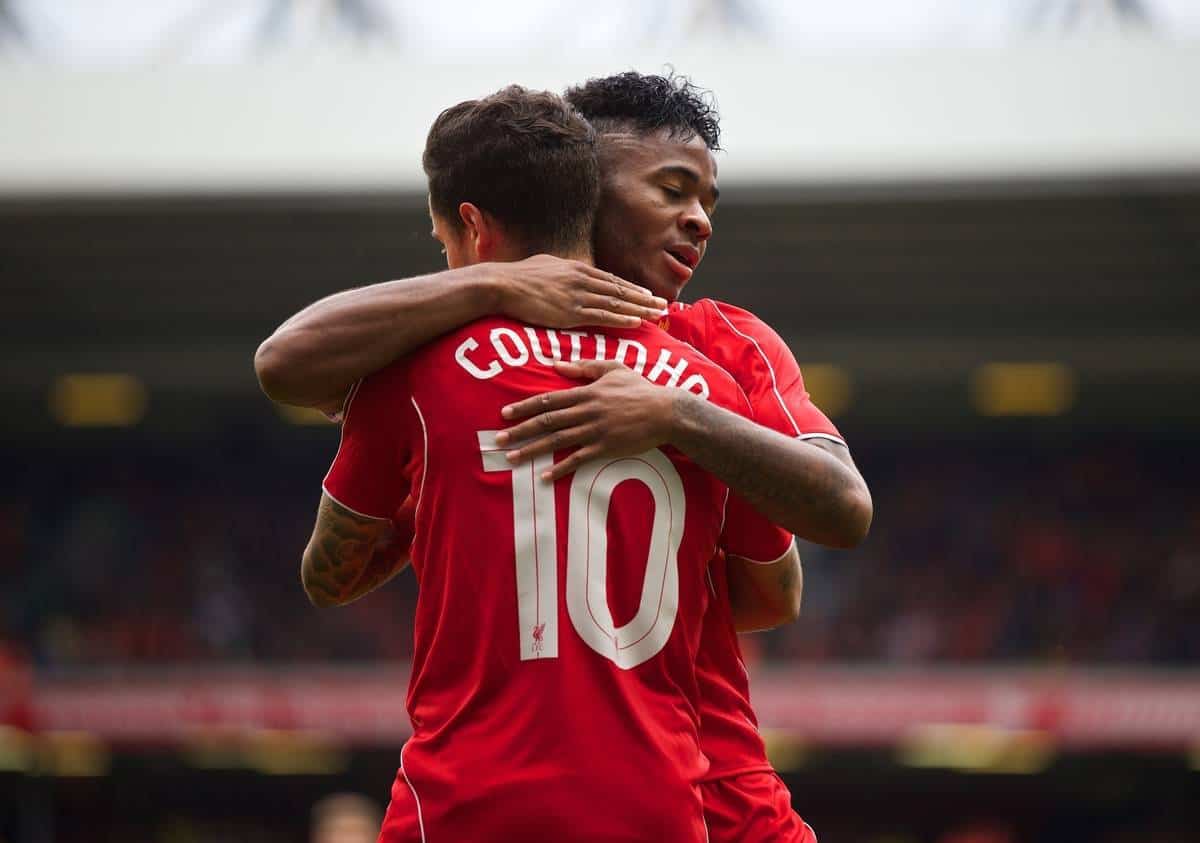 Liverpool getting back to winning ways in the Premier League on against Newcastle United coincided with a more confident and offensive style of play than Anfield had witnessed in the past couple of games, with Philippe Coutinho predictably central to much of the Reds’ good work.

While the Brazilian’s form has been key to much of 2015’s improvement, Monday night saw him operate in yet another new role for the Reds: the furthest forward central player in a fairly standard 4-3-3 lineup. With Jordon Ibe and Raheem Sterling either side of him there was plenty of youth, pace and direct running in the Reds’ attack, but it was Coutinho who was key to it all.

Of course, anybody watching the game (or following on social media what seemed to be the performance Vine was created for) will be aware of just how good Coutinho was technically during the 90 minutes, but in the role he played, his on-the-ball activity was only half the story.

The real key to Coutinho’s success in the role, and thus Liverpool’s ability to attack at will, was in his movement when out of possession.

While playing as the furthest forward player, Coutinho was anything but static and holding a high attacking position throughout. Against a back four which was as makeshift as Liverpool’s own, Coutinho was relentless in his search for space, pulling the Newcastle defenders all over the shop as he dictated the areas the Reds attacked in and who joined in.

When playing with a 4-3-3, it is natural to expect that the two wide forwards would be the ones most frequently involved in joining the centre-forward in the penalty area: one cutting in off the flank when the build-up play is on the opposite side.

However, that wasn’t Liverpool’s early premise, despite Raheem Sterling netting the opening goal. His strike came from picking the ball up in the channel after a cross-field pass, the most frequent area that both Ibe and Sterling took possession in before invariably attacking their respective full-backs.

Instead, it was the two central midfielders who joined up Liverpool’s attack, both following build-up play into the final third and also anticipating it by driving forward early, into the space which Coutinho vacated time after time. The runs forward by Allen and Henderson were absolutely key to the Reds’ approach; neither of them might make the big headlines following the match, even though Allen scored the killer second, but without them doing this job diligently and rigorously, the Reds would have been far less dangerous and the quick attacks would have been utterly blunted. Coutinho was the instrument to initiate the possibilities, but as always it was the team initiative which made the tactic come together to work.

Henderson’s runs forward in particular were vital because he was often the furthest forward Red shirt, not allowing Newcastle’s back line to step up and, in turn, keeping Coutinho in the space he craved.

Allen deserves credit and recognition for his willingness to not just stop at the edge of the box but to go on and make up more ground, but with a little more self-belief or selfish running, whichever way you want to see it, the No. 24 could have netted a brace in the first half. Low crosses into the six-yard box, the extra burst of pace between two defenders or just a simple gamble that the ball might fall his way. The 2008-vintage Steven Gerrard would have scored several in this game.

As for Coutinho, he dictated play and tempo, often outside the box to allow those second-line of attack runs.

One of the No. 10’s biggest traits has always been his propensity to drift between opposition lines, picking gaps between midfield and defence to receive possession and turn to feed team-mates. Newcastle, an admittedly accommodating opponent in this respect, simply couldn’t deal with him; bad enough when he features in the No. 10 role that he picks clever areas to appear in, but at least there he has a defined role and, inevitably, an assigned marker.

As the roving forward, the false nine for Liverpool, the Magpies’ defence was faced with a constant poser: let him go and risk Coutinho having time and space on the ball, or follow him and leave an enormous gap in behind?

Almost invariably, Mike Williamson and Daryl Janmaat seemed to get it wrong—or else get it right just a second or two too late, which was enormous testament to how well Coutinho played the role.

Take the Reds’ first goal, which on first glance seemed to have little to do with him. Just a few moments after the last image above, Coutinho did the same thing: drop deep, force the defender into a decision. This time, Henderson opted to switch play rather than drive forward himself. The next view shows just how important Coutinho’s off-the-ball play was to the Reds’ early momentum, almost assisting the goal without even touching the ball.

These runs and response-runs happened time after time in the first half, with Newcastle having no way to stop them. The lack of clinical edge from the Reds was really the only thing keeping the away side in the game until the break—that and Simon Mignolet’s terrific one-handed save just before the half-time whistle.

Coutinho drifted, dropped deep, worked the channels to create overloads. He initiated quick triangles of passing, he showed some of the most blinding footwork seen at Anfield this season and, just when you thought he was ignoring the fact he was actually playing as the striker, he showed great awareness and determination to several times attempt to lengthen play and sprint in behind the defence.

There were numerous occasions when Liverpool had three or four players inside the penalty area, and not one of them was the (metaphorical) No. 9.

Allen, Henderson, Alberto Moreno. All of them made ground inside the area in the opening stages. Midway through the first half, the wide forwards became more involved there too, with Sterling sprinting centrally into the gaps as Liverpool made use of Newcastle finally coming into the game as an attacking entity, while Ibe could also have scored or set up a chance when he drifted into the area twice.

Coutinho was playmaker, creator and chief tormentor. In likening him to another false nine it would be easy and appropriate to turn immediately to the false nine of the age, Lionel Messi at Barcelona, but it is probably more apt to recall Luis Suarez’s ridiculous exploits in Red.

Messi would run in behind as often as come deep to set up attacks from all over the pitch, but once inside the penalty area would also show the wizardry to beat defenders and create scoring chances from nothing. In that regard also, Coutinho deserves top marks against Newcastle.

Liverpool have on their hands a rare talent — one who is already signed to a new, improved, long-term deal. Is he a likely starter from centre-forward every game? No. He didn’t even finish the full 90 in this role, but it was right to add an extra forward presence in Fabio Borini, later in the game.

Coutinho’s finishing is not yet of the required standard to be the main threat, game in and game out, but it will improve this year and next, have no doubt of that. However, Liverpool cannot always count on as disorganised a team to play against and need the right players in place elsewhere to make the most of Coutinho’s creative ability, with space as much as with the ball. Adam Lallana will not attack centrally as directly or as quickly as Sterling did; Joe Allen will not always have the inclination to get beyond the 18-yard line as frequently as he did here.

But as another way to get the best out of the Reds’ prime talent, another way to confuse opponents and to steer the team toward another three points, letting Coutinho off the leash and freeing him to wreak havoc in the final third is exactly the right way to go for Liverpool. And may the goals flow freely.