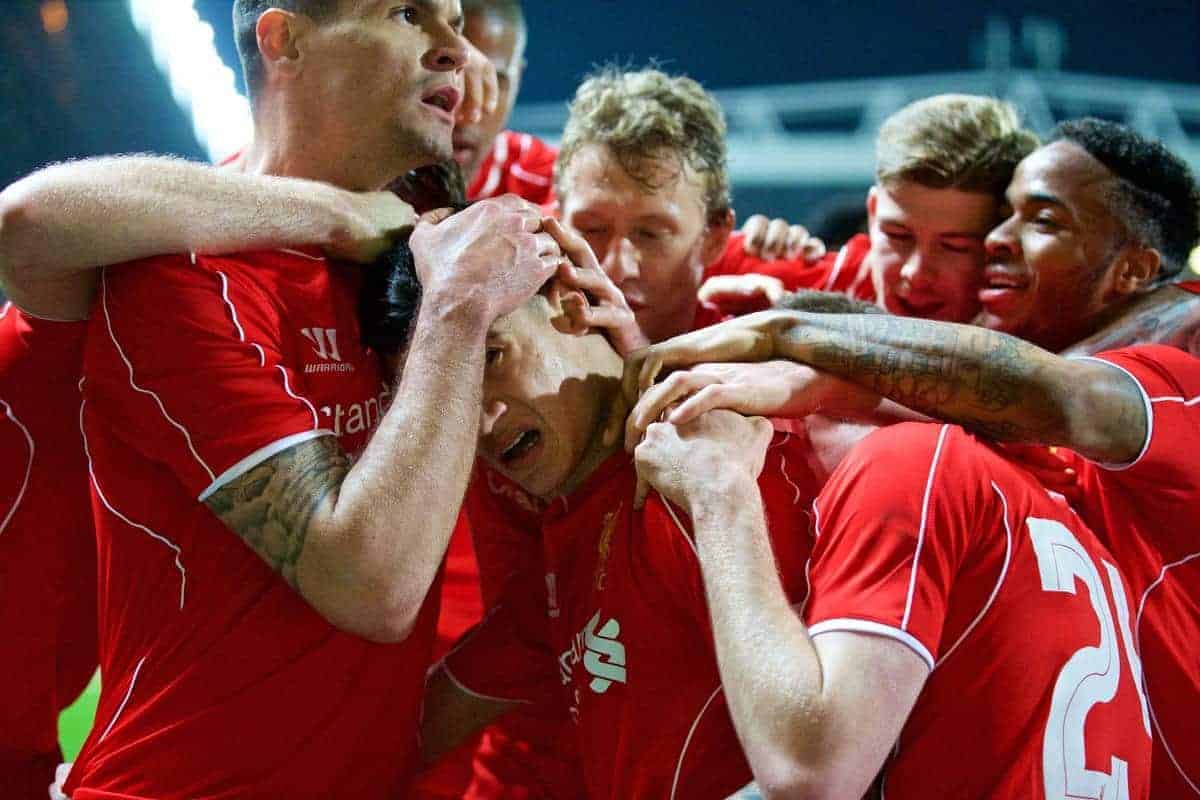 It won’t be regarded as a classic, but at last Liverpool have restored some positivity.

A single goal from Philippe Coutinho ensured the Reds passage to a Wembley FA Cup semi-final against Aston Villa next Sunday, after a largely cagey clash on a poor Ewood Park pitch.

Brendan Rodgers will be happy with the way his side approached the game, with some bright attacking spells and largely comfortable possession play.

Who impressed for Liverpool, and who disappointed?

After Kolo Toure’s excruciating performance against Arsenal on Saturday, there was no surprise when Dejan Lovren was preferred over the Ivorian for this encounter, and the 25-year-old largely impressed in Rodgers’ back four.

Lovren won six aerial duels and made eight clearances, dominating the lowly Jordan Rhodes and outlining a possible suitability to Martin Skrtel’s central role if Liverpool return to a back three against Newcastle United on Monday night.

What was perhaps most impressive was how Lovren maintained a consistency, despite his defensive partner switching from Mamadou Sakho to Toure after just 27 minutes.

Sakho’s withdrawal with a hamstring injury before the half-hour mark should be a disappointment for all Liverpool supporters if he faces time out—however, it did bring an end to what was looking a shaky performance from the 25-year-old.

Making a near-costly mistake following a knock-on from Rhodes in the opening stages, Sakho was forced into an admittedly exceptional challenge to deny the sprightly Craig Conway.

Furthermore, in possession Sakho was far from himself, posting a 74.3 percent passing accuracy—very disappointing compared to his season’s average of 89.5 percent.

The 25-year-old, operating in a box-to-box role alongside Jordan Henderson—while Lucas Leiva sat as Liverpool’s anchor—performed with persistence and guile throughout.

Lee Williamson, Rovers’ midfield destroyer, was one of the stand-out performers in the initial Anfield draw, but here he was a peripheral figure, and this was largely due to Allen’s movement into space and consistent harrying.

That it fell to some individual Coutinho brilliance to secure the victory perhaps says something about the dismal performance of Liverpool’s lone centre-forward, Daniel Sturridge.

Sturridge lacked the support of wide-men Coutinho and Raheem Sterling, and was forced to drop deep to collect the ball more than he would perhaps have liked, but it was the striker’s all-round individual play that truly disappointed.

Uninspired in his movement, flat in possession and still remarkably off the pace, Sturridge struggled.

The striker made five unsuccessful touches and was dispossessed four times—both more than any other player on the night.

It was an odd game for Coutinho, operating in a rather unnatural right-wing role after proving his influence flourishes when deployed as a No. 10.

But needs must, and Rodgers’ 4-3-3 did restore some fluency to Liverpool’s game.

In a wide role, Coutinho’s positives switched to different areas—namely cutting inside to produce six shots on goal, and pressing Blackburn high, making more successful tackles (four) than any other Liverpool player.

It was his trademark ingenuity which provided the game with its only true moment of quality, however, as a deft one-two was followed by a neat driven shot which gifted Liverpool the winner.

After a muted run of late, Coutinho rose back to prominence at a vital time.

Primarily culpable for decisive goals conceded against both Manchester United and Arsenal in recent league losses, Alberto Moreno’s poor form at left wing-back was surely one of the reasons why Rodgers opted to switch to a back-four defensive system on Wednesday night.

Happily, in the first half at Ewood Park Moreno looked to have improved, winning three tackles, often high up the pitch—helping Liverpool maintain their momentum and stymie Blackburn.

However, the 22-year-old dropped off significantly after the break, and made little contribution as the Reds probed for a winner.

Moreno had the least touches of the ball (55) of any Liverpool player to complete the full 90 minutes.

Who impressed and disappointed for you as Liverpool defeated Blackburn Rovers in the FA Cup? Let us know in the comments below.