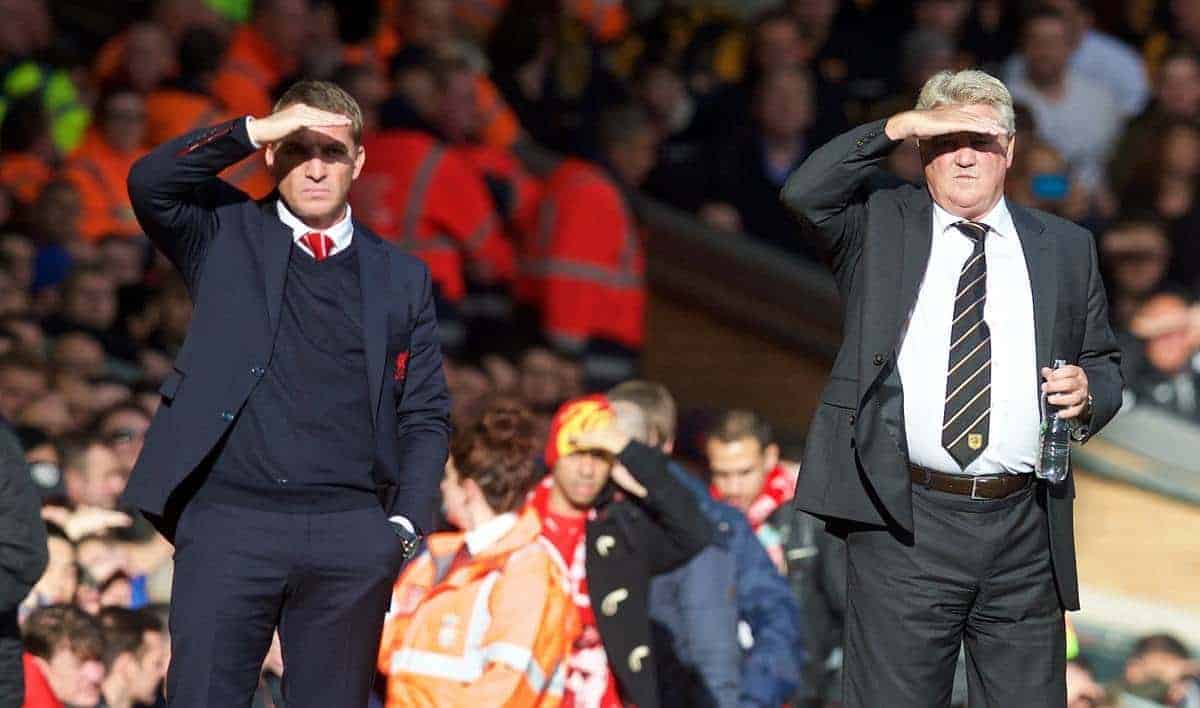 Brendan Rodgers’ Liverpool take on Hull City on Tuesday evening as they play their game in hand over top four rivals at the KC Stadium. Ben Twelves discusses the team selection options ahead of the fixture. With their aspirations of a Champions League finish hanging by the loosest of threads, Liverpool travel to Hull to play a vital game in hand against Steve Bruce’s relegation threatened Tigers.

A victory would close the gap on fourth placed Man United to four points with the same number of games remaining – a gap that could have been decreased to only two had the Reds beaten West Brom on Saturday. Having passed up a big opportunity to claw back ground on the top four at the Hawthorns, Rodgers’ men cannot afford to miss another huge chance on Tuesday night.

The Reds are reliant on those above to drop points if they are to have any remote chance of stealing fourth, but they must concentrate on themselves first and foremost, starting with improving their recent form of one win in the last four matches, against Bruce’s men who have won only one of their last seven league games themselves.

[pull_quote_center]Rodgers: “We can only focus on ourselves but we saw last year lots of changes can take place in the last five games or so. We just have to be prepared to give everything to finish as high as we can.”[/pull_quote_center]

Pressure is on for Rodgers’ side to come away with maximum points in what is their last chance to increase the tension on those above, and with no margin for error in Yorkshire, Rodgers could make some alterations to his side at the KC stadium – a ground Liverpool have tasted victory at just once in three visits.

Little has changed with the squad available to Rodgers and the Liverpool boss is once again to be without Mamadou Sakho and Daniel Sturridge who might miss the rest of the season, but midfield anchor-man Lucas Leiva could return to the squad for the trip having missed the last two matches.

Alberto Moreno also missed the goalless draw against West Brom with a slight knock but the Spanish defender could make a comeback to match-day involvement and with the game being the second in four days, Rodgers is likely to make some adjustments to his starting team for the clash.

Moreno’s possible presence at the back could see a shift in positions in the defence meaning Emre Can could be free to make a move into his natural midfield position, though the Liverpool boss could opt to reintroduce Joe Allen to the starting XI with Steven Gerrard needing a rest after completing successive 90 minutes against Aston Villa and the Baggies.

Adam Lallana’s return to fitness could see the 26-year-old handed the chance to build on his 15 minute cameo appearance at the weekend, and Lazar Markovic, who was unfairly withdrawn at Wembley, will be hopeful of reclaiming a starting shirt after being an unused substitute on Saturday.

In attack, Sturridge’s continued absence combined with the shortage of any meaningful forward options means Mario Balotelli could lead the line for successive matches, and despite the wealth of options available to join him, talented duo Jordon Ibe and Raheem Sterling could again be the men to form the Reds offense alongside the Italian.

After a number of tactical experiments failed to bear fruits at Wembley, Rodgers opted for a 4-3-3 last time out, and despite failing to make possession count, a largely dominant display within the shape could see the Liverpool boss deploy the formation again.

While Liverpool’s system therefore could remain the same, the personnel within it should alter slightly for the win-or-bust fixture, where Moreno should come back into the team at left back, allowing Glen Johnson to switch sides to play on the right.

Shuffling the defence like so means Emre Can is able to move into defensive midfield where he should replace Gerrard after the 34-year-old completed all 90 minutes in the last two games, and bring some much needed protection to the middle of the park in support of Philippe Coutinho and Jordan Henderson.

With the front three of Ibe, Sterling and Balotelli remaining the same, those small changes would see the Reds line up looking like this at the KC Stadium: However, with the system failing to spark a blunt and uncreative Liverpool attack into life, Rodgers could instead switch to the 3-4-2-1 that did, originally, make a noticeable difference in that department.

The back three picks itself with Can adopting the right centre-back role alongside Martin Skrtel and Dejan Lovren, who turned in a better performance at the weekend, and Ibe should play ahead of the German at right-wing back, outside of a Henderson-Allen partnership.

Coutinho can then move into the shared No.10 role alongside Sterling with the pair supporting Balotelli where a hopefully more blistering attack materialises, and the change of shape should see Liverpool’s XI look like this come kick-off time Tuesday night: It’s very much the last chance saloon for Rodgers and his side to assert themselves on the top four race on Tuesday night, when anything but three points from a must-win game will all but confirm Champions League football next season for those currently in the top four places.