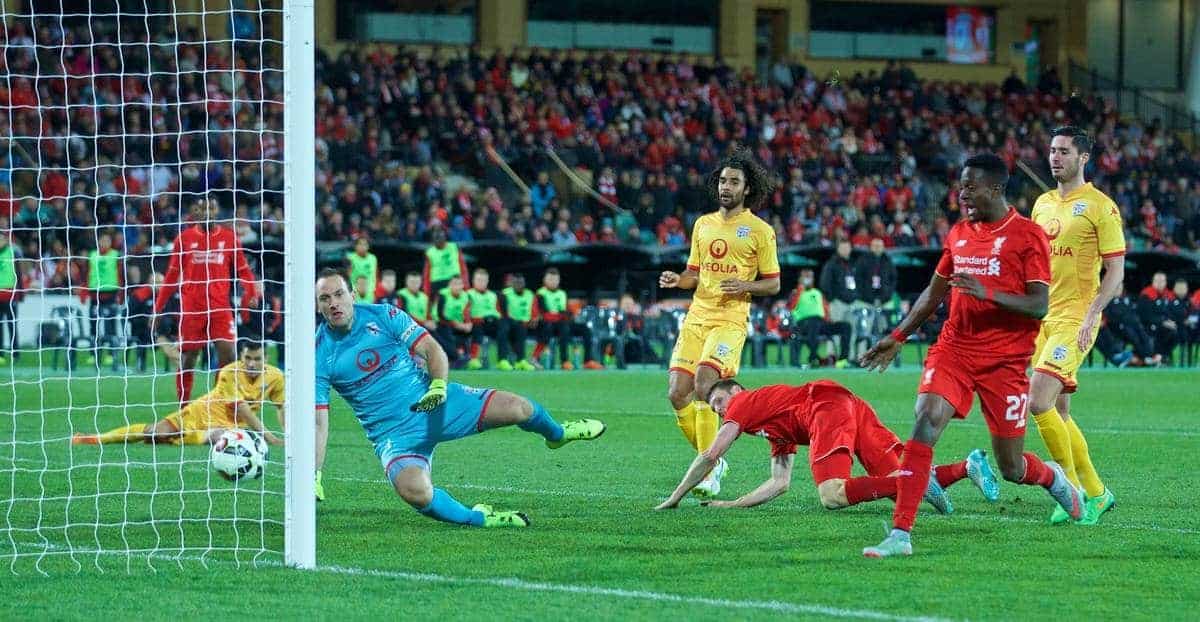 Goals from James Milner and Danny Ings were enough to see Liverpool beat Adelaide United 2-0 at the Adelaide Oval on Monday.

Brendan Rodgers made three changes to the side that beat Brisbane Roar 2-1 on Friday, as the Reds faced Adelaide United in the last of their pre-season games Down Under.

Dejan Lovren replaced Mamadou Sakho at centre-back, Joe Allen came in for Lucas Leiva in the heart of the midfield and Jordon Ibe was preferred to Danny Ings.

There was another start at left-back for impressive youngster Joe Gomez, while fellow new signings Nathaniel Clyne and James Milner also began proceedings.

A lively, fluent start by Rodgers’ men saw the likes of Allen, Ibe and Adam Lallana linking nicely, while Origi missed a good chance in front of goal.

Ibe also tested Galekovic 26 minutes in, as Liverpool continued to dominate the contest. Simon Mignolet had barely touched the ball.

The game went a bit flat in the lead-up to half-time, barring a decent effort from Milner, but it had still been a pretty solid opening 45 minutes from the Reds.

There was just one change at half-time, with Alberto Moreno replacing the excellent Gomez at left-back. It was a rare chance to shine in pre-season for the Spaniard.

Lovren had a wonderful chance to open the scoring shortly after the interval, and boost his own frail confidence, but his free header was wayward.

The dangerous, powerful Ibe fired a shot inches wide of the post after 57 minutes, as Liverpool started the second-half in dominant fashion.

Lallana then forced Galekovic into a fine one-handed stop, but it wasn’t long before the Reds were ahead. Milner finished clinically from close-range from Ibe’s cross, scoring his second goal in three days in the process.

The rest of the game was very comfortable for the Merseysiders, and substitute Ings scored his first Liverpool goal with two minutes remaining, having rounded Galekovic.

It was the final moment of note in the game, as Rodgers’ side concluded their tour of Australia with a well-deserved, professional victory.